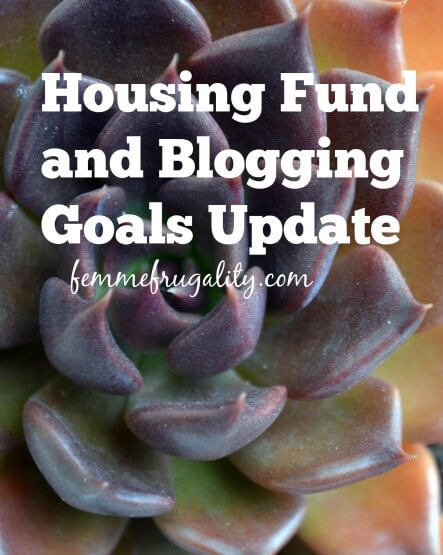 It’s been a little bit since I let you all know how our house fund is going, so I thought I’d do an update today.

Right now we are sitting at 24% of our goal.  This goal has been a bit modified; if we stick with the original plan of putting a full 20% down (which is preferable) we’re at 15%.  (Note: When I say housing fund, I am including our emergency fund in with that.  In order for me to buy a house, I want my emergency fund to be large enough to pad us should anything unthinkable happen.  So the house fund is how much we will need for my larger than life emergency fund standards, the down payment, and closing costs.)

That’s honestly not bad.  I’m pretty happy with the numbers as they’re commensurate with where we ideally want to be on our timeline.  But I know it’s not going to stay that way.

I have a variable income at work.  The worst months for it are over the summer while the best months are coming to a close.  In the blogging world, the summer months are typically the slowest, as well.  In fact, May was the absolute slowest month I’ve had with income on this blog in over a year.  Traffic has still been steady, but the money just hasn’t been coming in at the same rate.  Even though I knew it was coming, it was still a little bit of a shock to the system.

Writing, on the other hand, has been going pretty well.  If you need or know anyone who needs a staff writer, please send my name along!  This aspect of working online has been a lifeline, and I’m glad it’s work I enjoy doing.

Unless I can really build up writing a little more, I don’t think we’ll be able to contribute to the house fund again until fall.  I’ve added up our numbers, and we have enough to make it through July without tapping into the house fund.  I’m planning on having a bit of additional income to make it through August and September, as well, but nothing’s in stone yet.  Once I have those two months covered, anything additional will be going towards the house.

I’m not sure if there will be anything additional.  At this point, making it through the summer without touching savings will be a huge psychological win.  But I really want to try.  I want to prove to myself that I can do this.

I also want to start automating Pinterest.  Because I’m spending way too much time on there.  Does anyone have any solid recommendations for that?  I’m not above spending $5-$10 a month to do it.  But I’ve seen so many reviews for so many services that I’m not really sure which direction to go.

How is your side income going lately?  How about progress on your financial goals?