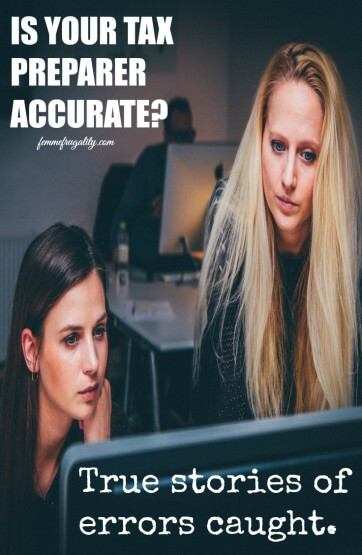 Filing taxes is not the funnest thing in the world. Even if you’re getting a fat check at the end, you have to spend a lot of time tediously going over numbers before you get there. A lot of people use services specifically to avoid that tedium.

Let me throw something else that’s not so fun out there: you’re going to want to watch those services. While the tax preparer may be a trained individual or approved program, that does not make them infallible, and at the end of the day, you’re the one on the hook should you get audited.

I’ve had experiences across a wide range of services. I don’t want to call them bad experiences, because taxes are complicated, and it’s understandable that oversights are going to happen. But I do want to share them to emphasize the point that it’s important to go over your return yourself, and make sure you understand it, no matter which method you use.

When you’re going into a physical location, whether it be a big tax store, a military base tax assistance center, or a VITA location, you’re working with trained seasonal workers. They’re not CPAs. And even if their training was completely thorough, they’re human beings who are only doing this for a couple of months, many of them with no prior background.

For instance, one year we got our taxes filed with VITA. They wrapped up our PA return rather quickly, and I quickly noticed they hadn’t submitted for PA Schedule SP. I asked them why. They said we didn’t qualify.

I had reviewed our situation thoroughly before we went in to our appointment. I was pretty dang sure we qualified. “Why don’t we just try it, and see what the system says?” I didn’t want to make the guy feel like an idiot.

So he did. His jaw hit the floor as he spat out an erroneous assumption he had been holding about income levels. “I’ve filed so many returns….” he said, and it was understood that many of those low- to middle-income households could have also benefited from the credit.

If I hadn’t known to ask, we would have walked out of there owing money to the state instead of walking away with a refund.

I’ll say this: I have had an experience I’m willing to label “bad” at a big box store.

Another year, I used tax software, endorsed by IRS Free File. It was a big name software program, so I wasn’t anticipating any problems. However, when I went to file my state return, there was a problem. A big one.

We’re non-traditional students (I formerly, my husband currently,) and earn more than our tuition in grants and scholarships. That means the school cuts you a refund check for the portion of that money that’s over tuition and fees. The Federal government taxes this money. Our state does not.

We had to enter the scholarship excess on our Federal return, and could not remove it from the state without removing it from both returns all together. That led to the choice of not reporting on Federal (a big no-no,) or paying taxes on nontaxable income for our state. Neither was a true option for me, so I used the program for our Federal return, but chose to do the state myself, independent of the software.

But the only reason I knew to do that was because I was familiar with that portion of my local tax laws. The program didn’t catch the error, despite the refund guarantee.

Don’t Become Completely Reliant on Others

It stinks, but the best course of action is probably to familiarize yourself with the tax code you’re subject to. Seasonal workers are a great set of second eyes, but are not infallible. Computer systems are just that: computer systems. There are some parameters they haven’t been programmed to meet, and if you’re not familiar with tax code, you might not even notice their errors. The best set of second eyes is probably a CPA, but even then, you’ll want to review every detail before they submit. It’s your name on the tax return, and your responsibility to understand it.

Have you ever caught an error by a tax preparer? How did you handle it?

2 thoughts on “Is Your Tax Preparer Accurate? Tax Time PSA”