Today’s post comes to you from the ladies of Women Who Money!

Amy is the co-founder of Women Who Money and the founder and blogger behind Life Zemplified. She enjoys writing about mindful spending and saving, retirement planning, and financial independence.

Vicki is the co-founder of Women Who Money and the founder and blogger behind Make Smarter Decisions. She enjoys writing about real estate investing, financial independence, career decisions, and travel. 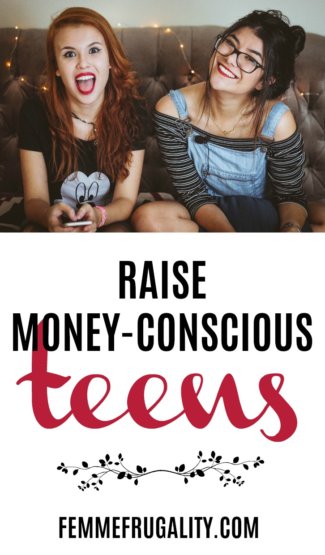 There’s one saying that you hear all the time when you have kids. And before you know it, your saying it, too.

Kids grow up so fast!

As they grow, we teach our kids all kinds of things. But one of the most important jobs we have as parents is teaching our kids about money.

When they’re little, it’s not that hard to do. We teach them about saving, spending and giving. We buy them a piggy bank and show them the value of different coins. And they learn that you earn money by going to work each day.

Teaching teenagers about money is an entirely different thing! With all of the advertising kids see on TV and the social media marketing targeted at teens, it can be an uphill battle to help teens understand money and avoid taking on debt. And it’s certainly a challenge saying no to your kids so you don’t take on more debt too.

Even if you haven’t been the best money role model in the past, it’s not a reason to let your teen start off with bad money habits. The Women Who Money team has raised four teenagers, and we’re here to share a few stories that can help you raise money conscious teens. We hope these tips will help save mom and dad some money too!

We were able to teach my son a lot about money when he saw how careless his first girlfriend was with her cell phone. In the first three months they dated, she lost one phone and cracked the screen on another. Yes, you read that right – two times in three months! Both times, her parents took her to the “big name” phone store to use their insurance to replace her phone.

Without talking about the choices her family was making, we simply told our son we wouldn’t be doing the same thing for him if that happened to his phone. We had him set up a “replacement phone” category in his bank account, and he automatically had a small amount of his money moved into that account each week. This taught him about self-insuring.

We gave him his first phone as a gift. It was as an older model (refurbished) iPhone, and we set him up on a low-cost cell service provider. He had to put a case on the phone before he turned it on and it had to stay on if we were going to help pay for the service. His plan had 2 GB of data, and he quickly learned how to monitor and reduce his usage.

Our son got his phone and had a plan in case something happened to it. It wasn’t the “latest and greatest” phone, but it met his needs. He also had enough data to do most of what he wanted to do when he was off WiFi. We saved money, and he definitely became more money-conscious on an expense that can cost hundreds of dollars a month!

One of my daughter’s favorite things to do was head to the mall on weekends! She’d find a ton of great “deals,” and before she knew it, she was out of money. Then when she wanted something for a special event at school, she wasn’t happy when she couldn’t buy something new.

Instead of just handing her money or letting her dip into her savings account, we took time to teach her different ways to shop. On her next trip to the mall, we told her to look at and try on all the different things she really wanted. But the rule was that she couldn’t buy anything. She could take pictures of the items, and we’d talk about it when she got home.

Homecoming was the next month and she wanted to buy a cute dress for the dance. We looked at all the dresses she tried on and the price of each one. We showed her where she could buy a discounted gift card online for the store where she found the dress. It was only a $5 savings but she combined it with an online ordering discount and saved more than $15 on a $50 dress. A 30% savings when she normally would have paid $50 in the store!

She learned that not giving in to impulse buying saved her a lot of money. We also noticed that she bought much less over the next year because by the time she got home from the mall and looked things up online, she decided that she really didn’t want the item! Other times she waited a few months to buy an item and she was able to get it on clearance. She still loves shopping but for the most part, her habits have changed and she spends much more wisely!

Cars and Their Ongoing Costs

It’s important for our children to understand the cost of some items continues beyond the purchase price. Take automobiles for example–insurance, registration, gasoline, and maintenance costs are all ongoing expenses most kids don’t think about.

When we gifted our daughter and son used cars on each of their 16th birthdays we outlined how the cost of these ongoing expenses would be handled. Initially, we would paid for the insurance, registration, and normal maintenance costs. We also covered gas costs for getting them back and forth to school. They were responsible for gas beyond the school commute and they were to take over additional vehicle expenses after their high school graduations.

Each of them worked after school and summer jobs and were responsible for budgeting their income to cover their initial gasoline costs and later their additional car expenses. This taught them to plan for upcoming insurance and auto registration bills. They also learned the importance of having a small emergency fund to cover potential unexpected repair costs.

While you may not purchase a car for each of your kids, you can still do this with a shared or family vehicle as well. Your kids can be responsible for any gas they use in the car, and they can also contribute a small percentage to additional vehicle expenses in proportion to their use of the vehicle.

If your kids will be saving up their own money to purchase a first vehicle, help them understand and budget for the additional expenses aside from the advertised price of the car. Sales tax and the items mentioned above add up quickly and you want them to be prepared.

When your kids want to spend their money on a video game, electronic gadget, new pair of sneakers, or some other item, advise them to make some price comparisons before pulling the trigger. This will not only teach them that prices vary considerably amongst some retailers, but it may also instill a bit of patience in them.

Because they won’t be running out to the nearest store on a whim or buying from the first store they enter at the mall, they’ll learn the art of the wait. Perhaps this may even get them to reconsider their purchase.

Not giving in to immediate gratification can give them time to evaluate their desire for the item. And whether the kids change their mind or not, this practice will help them save money. Usually, by finding the thing they want at the best price possible and occasionally by not spending any money at all.

Kids grow up so fast. Teach them about earning, saving, budgeting, spending, and giving. And use our examples and tips from above to help instill money conscious behaviors in them so they may become money-savvy adults.