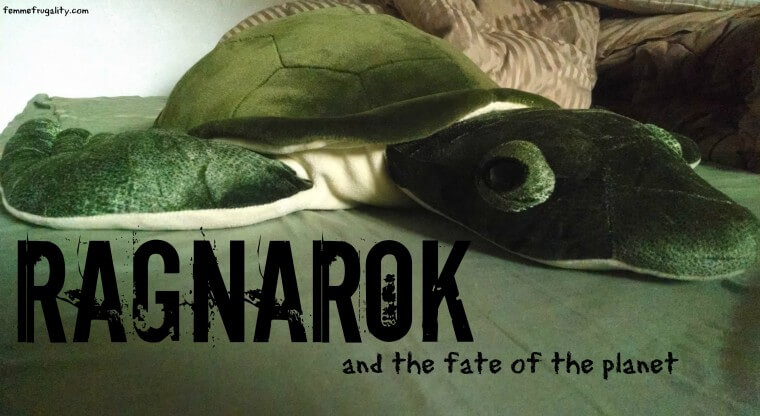 Meet Ragnarok.  He’s been a part of our family longer than our children.  On one of our first dates we went to the zoo and picked him up as an impulse buy.  He’s served as an over-priced decoration and pillow in our household for many years, absorbing cuddles, temper tantrums, tears, and laughter.

When we got him, the boyfriend now husband gave me two options as to what to name him.  One of them was stupid.  The other one was Ragnarok.

Ragnarok is essentially to Norse mythology what the book of Revelations is to Christianity:  a foretelling of our planet’s unavoidable doom.  The world will end in upheaval at the whim of a myriad of natural disasters, annihilating not only mankind, but many of the gods.  A few of those deities will survive, however, along with two human beings who will repopulate a pristine new world with new landmasses to replace the ones that have been decimated.

The two people repopulating the world reminded me of the flood myth that permeates pretty much every culture ever.  Which made me think of the Native American creation myth that varies from tribe to tribe, but pretty much always includes a turtle that the first human being rests on in the great blue sea.  The turtle directs other sea animals to bring up dirt from the ocean floor to create land for the woman to walk and live on.  In these stories, the land we walk on still rests on the back of that turtle.  If the world were to be created anew again, why not have it happen the same way?

Thus Ragnarok got his name.

But good old Ragnarok’s been looking pretty rough lately.  He was coming apart at the seams with stuffing spilling out of his stomach, neck, and fin.  There were two reasons I wasn’t going to throw him away:  first, I felt like my sewing skills could save this physical allegory of Planet Earth without having him end up in the dump, and second, I was not going to lose another turtle.

So I sewed him up.  My stitches were imperfect.  My thread was about two shades too yellow to match his cream belly.  But he lives on.  Ready for more “pillow” fights and years of comforting.

The myths and prophecies about our earth are coming true.  Our earth will, most likely, end in a fitful death.  A lot of that is our own fault.  But I’m not ready to let the planet that my children will inhabit die quite that easily, either.  I’m stitching her up.  The stitches are imperfect and small, and it’s easy to feel like they’re not making a huge impact.  But we’ve found a way to start recycling since I’ve read Madeleine’s book.  I just cut up some old clothes bound for the trash so that we can use them as rags to replace paper towels.  I’ve been cleaning with baking soda and vinegar instead of horrible chemicals for over a year now.  I’m shopping consignment again rather than buying a bunch of cheap clothes new, which would force even more manufacturing and most likely a continuance of inhumane work conditions to fellow human beings in other countries.

It turns out doing these things are also incredibly budget friendly.  By reducing how much we use, we reduce how much we spend.  By cleaning with homemade green products, we spend far less than if we were using commonly marketed chemical cleaners.  When I shop consignment, I get better quality and quantity for my dollar.

I’m not deluded.  I know there’s no way those small things would add up to an end of global warming.  But maybe if we all sew together, even small amounts with imperfect stitches, we can delay the coming of the Norse’s Ragnarok, just as our family extended the life of our stuffed turtle.

7 thoughts on “Ragnarok and The Fate of the Planet”