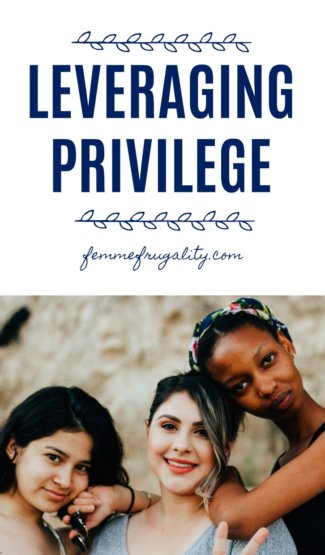 Hi, Ms ZiYou here. I’m so excited to be writing a guest post here when Femme Frugality is away on holiday.

And what better a topic to cover than intersectional feminism,–in particular the concept of privilege. It really disillusions me that certain sections of the population are so marginalised, especially those who feel the brunt of many different types of oppression.

Lately, I’ve been thinking I really should do more, and learn what I can do to use my privilege to help others. Therefore a few months ago I went to a talk on leveraging privilege. Here I attempt to unpack the talk and the lessons I personally learned. And share my minor frustrations that it was not really what I expected.

What privilege do you have?

As you may expect from the title of the talk, the first part was about acknowledging our own privileges, so we can work on leveraging privilege. So now seems like an appropriate time to state that I know I am privileged. My personal luck is due to being born in the UK, to middle class white parents. I only recently realised how lucky I was.

What am I missing?

But this was a tech talk. I am a geeky woman working in tech, which leaves me feeling othered and generally bristling at the male privilege in the field. Bosses are usually male, and 80% of staff are male. There is a very bro culture in the industry, although this varies company to company.

Nowadays I don’t experience any outwardly visible oppression, but boy there are a lot of microaggressions and assumptions. People assume that most females are in non-technical roles, more junior and just more willing to undertake clerical duties.

So I turned up at this talk and expected to learn about how the privilege I do have can be used to overcome the ones that I am lacking, and maybe pick up some good hints and tips. But all was not as it seemed.

Sadly when it comes to influential spheres, privilege is really evident in 2018. The rich, white, able-bodied, straight male sits at the top of the pecking order, in virtually all large organisations of all types in the western world. You just need to look at government or boardrooms, to see this the case in reality. Sometimes they are aware of and acknowledge their privilege, other times they genuinely believe it was just their amazing brains/hard work/tenacity/genius that propelled them to the top.

Anyway, at this talk the speaker outlined and discussed these birth privileges with no real surprises. He gracefully acknowledged his privilege being born a male in the US, but also the challenges he faced being a black man.

He then went on to classify items you can earn for yourself such as education, and experience as selective privilege. This is where I started to disagree. Whilst I agree education and experience are fabulous things to strive for and achieve, I don’t believe they are a privilege in the way we talk about privilege. I

f we use the definition of privilege as “unearned access to resources”–for most of us anyway–education and experience are very much earned the hard way. So why was he classifying them similar to unearned privileges? This confused me a little, and all the little cogs in my brain started to buzz, trying to get it to make sense.

Hi, guys. Femme here. When I initially read that last part, I had a feeling there was a little bit of cultural disconnect. So Ms. ZiYou and I discussed the differences between our education systems here in the US and where she is based in the UK. Here’s my American take:

Because this man was American, I’ll wager a guess as to what he was talking about. Education here isn’t something everyone has equal access to. Our school system is decentralized, and as a result, less affluent primary and secondary school districts don’t have equal access to resources. So you could work really hard, but not see the same results as someone in a rich, (usually) white area.

That doesn’t mean no one ever achieves, but it does mean it’s more likely that you can put in the same amount of effort and not realize the same opportunities–whether that be college (university) attendance, or gaining access to an affluent network that will help you build your career.

Another problem with experience is proximity to opportunity. Lower-income neighborhoods–which in many areas are largely minority neighborhoods thanks to some racist, antiquated and oppressive housing laws–access to opportunities to gain that experience are not as readily available.

Cultural norms also vary in a classist way and must be learned and navigated if you want to obtain that success and get those experiences–even if you have the raw skills. The most obvious example of this is code switching depending on who you are talking to or which setting you find yourself in.

So while most everyone who reaches success may work hard, not all those that work hard have the same access to success–whether that be through educational opportunities or the experience that comes from being presented with an opportunity at the intersection of their hard work.

That is a very good and humbling point that education doesn’t work the same across the pond. Here we funnel funds and resources into poorer areas and don’t tend to have as much racial segregation. And universities have targets to encourage more applicants from lower income backgrounds. There is obviously still an aspirational divide, and the role model conundrum.

As well as understanding our inherent, birth privileges and our gained selective privileges, reverse privileges were covered. These are rare and unexpected serendipitous things, that are good to be aware of in everyday life. Sadly these benefits don’t really translate well to the workplace, but they are an interesting concept to explore. Some examples are:

The main section of the talk was about leveraging privilege. Here I was expecting to get some good actionable tips. The speaker covered a few examples, which all involved leveraging your current position, and lending visibility to people who lack credibility. Which is always a good thing in my book. But the specifics just didn’t make sense. Some of the examples were:

What rubbed me up the wrong way?

Privilege is a word that has strong meanings today and I think he brushed off the serious oppression and multiple barriers out there. And by including things that are earned with serious hard work under his definition of privilege, it somehow lessened the meaning for me.

Secondly, he gave some great suggestions for leveraging privilege; but they would only work if you had a position of power and had people of less privilege working very close to you.

I get no conference invites. My presentations are highly technical, and not easily handed over. My network is not full of powerful people.

He was catering to people like himself. A black man that has made it to a senior tech position. And giving examples that worked for him personally, but with little thought of how they would translate to different environments.

I feel this talk would have been much better if it was a marketed differently. The actual audience and intended audience seemed a little far apart. Especially for the examples given to be used as practical examples. Although no doubt very well-meaning, he was promoting a bootstrapper mentality with what I viewed to be a misunderstanding of privilege.

And what also grated was the belief in the top down mentality. That power and status (held mainly by white men) is needed to make changes. I’d have preferred something a bit more grass roots. And some more actionable tips that were realistic for people like me.

Cause I do actually believe I can make a difference, and more importantly that I should take action.

Over to you, what do you think? 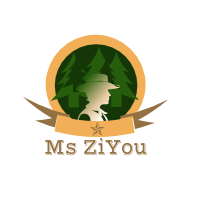 If this sort of talk interests you and you want to connect I’m on Twitter at @ms_ziyou. Alternatively you can catch me on my blog. I take a feminist view of the financial independence movement and finances, and share with you my journey along the way.