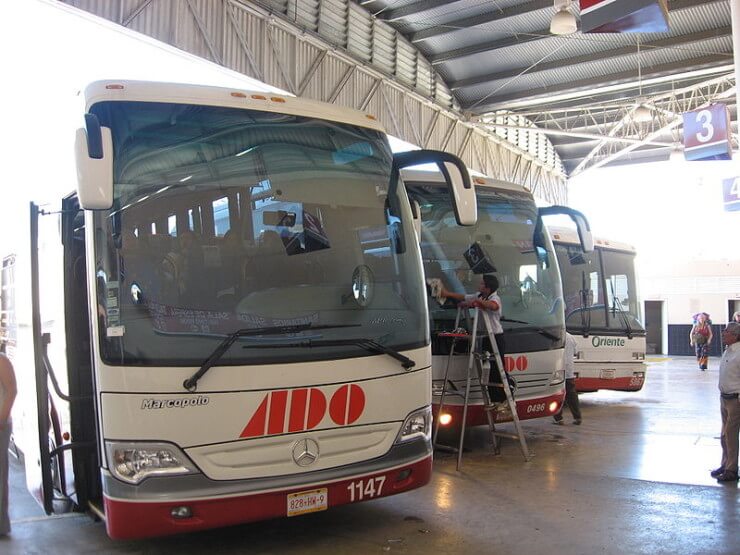 When we started planning our trip to Tulum, we were offered a ride to and from the airport via a company our hotel worked with.  The price was $200 USD.  That didn’t seem outrageous to me, but I wanted to see if we could do better.

And we did.  Mexico has a wonderful bus system called ADO.  When I think of a public transportation bus system, I think of what we use here in the inner-city of Pittsburgh.  It’s nice that it’s there, but it’s not wholly comfortable, there’s no such thing as an en-route restroom, and sometimes your co-passengers are downright shady.

ADO is the exact opposite of that.  The buses are what we would think of here as charter buses.  They’re comfortable with cushioned seats, foot rests, and sun-blocking shades.  They have room for carry-ons above your head and other luggage down below.  There’s a restroom on board, and they’re also very safe.  To top it all off:  they’re dirt cheap.

Getting From the Cancun Airport to Tulum

To get from the Cancun airport to Tulum, you have to take a transfer.  You catch the first bus outside the terminal; everyone but ADO will be trying to sell you transportation.  When you get outside you’ll see the buses and a man standing there selling tickets.  From there you can either go to the main concourse in Cancun, and then to Tulum, or you can transfer in Playa del Carmen, which we did. 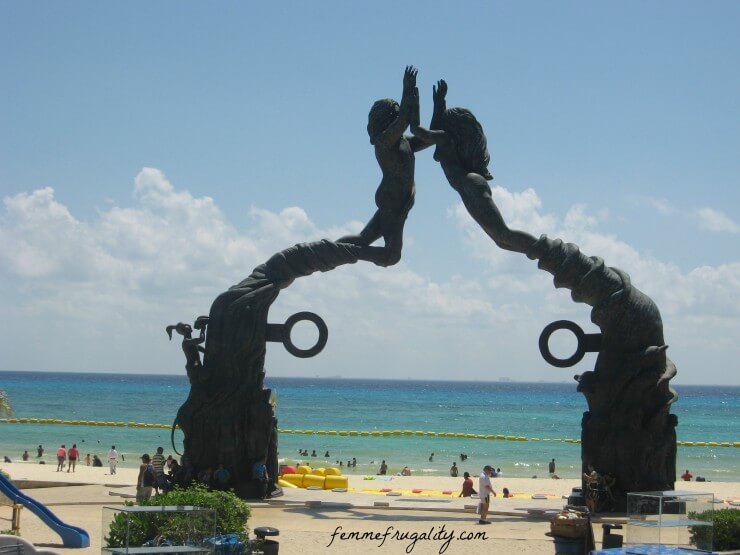 This statue had a lot going on. All of it was really cool. It was also our first taste of the visual delights that are Caribbean waters.

We had about an hour between buses.  We walked around the shops and admired the sea.  We caught the last bus to Tulum which left at 11:30 that day.  (Check the bus schedule before you leave, as we found some of the buses that head to cities further south have limited availability and are only offered certain times in the day.  But DO NOT buy your tickets on-line.  You’ll see why below.)  The entire trip, from Cancun to Playa del Carmen to Tulum, cost us about $20 USD a piece.

Getting From Tulum to the Cancun Airport

Coming back, there is a direct bus from Tulum to the Cancun Airport.  When our concierge asked us how we would be getting home, I felt proud when she said, “That’s how I travel!”  Even if it’s the only thing I did as a local, at least I knew I was doing one thing authentically by riding ADO.  She warned us that the buses from Tulum to the airport fill up quickly, though, so we would probably want to buy our tickets ahead of time.

So I tried to book online.  Which is where I hit a snag.  The website was all in Spanish, which made sense because we were in Mexico.  My Spanish is horrible. (Every time I tried to speak it, the person I was talking to would come back with French.  They’re used to tourists from everywhere.  And I do speak French.  But I was trying to speak Spanish.  Fail.)  So I couldn’t figure out how to translate the page into English.

Concierge shifts had changed, so I asked the new one if he could help me translate the website.  He said no.  Apparently the website has known security issues, so it’s much better to buy in person.  He told us that we should buy early, but to just go to the bus station the day before and buy in person rather than buying online.  Which we did.  To get back to the airport cost us each about $15.

Just to recap: taking the first transportation option that was made available to us would have been $200.  Taking the buses cost us a measly $70.   ADO is the way to go.

I did tons of research before making this trip.  I’m type A like that.  I was ready to negotiate with taxi drivers and pay a maximum of 50 pesos per trip when getting around town.

My research was wrong.

Not a single driver in Tulum was willing to negotiate on their fares.  The cheapest we got a taxi was seventy pesos from the hotel zone to the ADO station to buy those tickets.  The rest of the time anywhere we went (except for Muyil, transportation was included in that package,) we paid 100-150 pesos.  Non-negotiable.  Period.

But, it was one of the only ways to get around.  And all things said and done, wasn’t all that expensive.  (A little less than $10-15 USD  a ride at the time we traveled.)

Others rode their own or rented bikes around the area.  Kudos to them, but I’m really glad we didn’t end up doing that.  It would have been okay if we were staying in the hotel zone, but we weren’t.  More information on why next week.

8 thoughts on “Getting To, From, and Around Tulum”