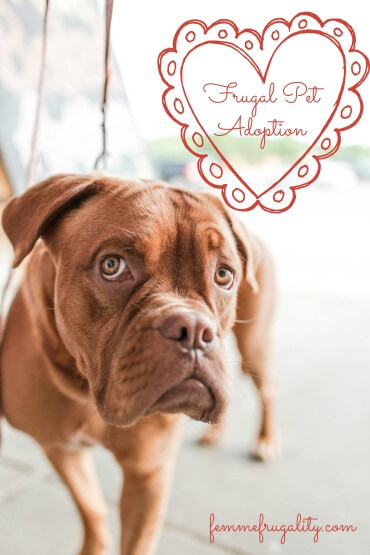 This post is inspired by the ideas of Sheila from The Frugal Exerciser.  Have something you want to see on Femme Frugality?  Shoot me an email.

I was super stoked when Sheila told me she wanted to hear about frugal pet adoptions.  I hail from Pittsburgh, home of The Humane Society, so I feel like there’s a lot of pride in our animal rescue organizations here in this city.  When I had to give up my own pet, they were there for me as I walked away bleary eyed.

That’s the thing about pets:  they touch our hearts.  And to touch our hearts they don’t need us to spend a bunch of money on them.  Who cares about pedigree, trendy breeds, or fancy pet stores when there are so many shelters filled with animals who would love nothing more than a loving home?  The trendy breeds cost a lot more money, while the shelter animals are affordable and come with a complimentary dose of that feel-good hormone we get when we do something decent for another living being.

In Pittsburgh, there are three major shelters that I’m aware of:  The Human Society, Animal Rescue League and Animal Friends.  When it comes to getting a new pet, there are two things you’re generally concerned about financially right off the bat:  adoption fees, and spaying/neutering/vaccinations.

The Humane Society (most inclusive packages for puppies)- On the higher end of the scale, The Humane Society does offer the most inclusive package for adoptions for puppies.  While a puppy under six months runs $250, that fee includes obedience classes.  Dogs six months and older are $155, and their fee includes training classes.  Dogs seven years and older are $50.

The Pittsburgh Penguins Could Save You on Adoption Fees.

If the Pens win a game, Animal Rescue League reduces their adoption fees by a certain percentage the next day.  The percentage is decided by the jersey number of whoever scores a winning goal.  For example, if Sid the Kid himself scored the winning goal, all adoption fees would be 87% off the next day.  The Pens also do some type of calendar with ARL each New Year to help them raise money.

Check out the pets available for adoption at Animal Rescue League here.

Animal Friends also has some really cool adoption discount programs.  For instance, any veteran who wants to adopt a pet age 2 or older can do so for free.  If you’re a senior (age 60+,) you’re eligible for discounted adoption rates. It’s called the Golden Age Retriever Program.

You can check out all of the animals currently up for adoption at Animal Friends here.

If you have found a stray, taken a kitten from a friend’s recent litter, or otherwise came into a pet that has not had the proper procedures done, you’re going to want to get it spayed or neutered.

Animal Rescue League- For cats, the Animal Rescue League charges $63 for spaying or neutering including vaccines.  If your cat already has the vaccines, it’s only $43, but you have to be able to prove it.  These are also Spay Days, and they run Tuesday thru Friday by appointment.

Similar to Animal Rescue League (only cheaper,) Pit Bulls are a lower cost to spay or neuter at only $30.

Other Programs You Should Know About 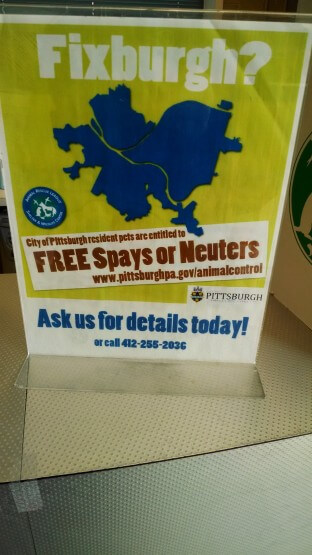 City of Pittsburgh Residents Get Free Spaying/Neutering (For Their Pets)

Right now the city of Pittsburgh has a program going where all city residents can get their pets spayed or neutered for free.  This does not include vaccinations, but it does include microchipping (for an additional $3.)  Because you’re legally allowed to have five pets, you can get up this service for up to five pets.  You can get more info on the program here.

A Food Bank Especially For Pets

Have you gotten into a spot where you can’t afford to feed your pet?  The Humane Society runs a program called Ellie’s Pet Pantry that may be able to help you out with some free pet food.  You can check out more on the program here.

I’d love to hear more about your furry friends!  How did they come into your lives?  Did the costs of pet ownership surprise you?