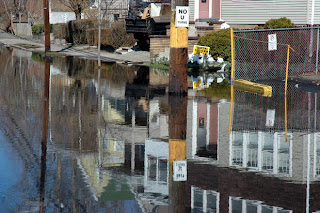 We had some pretty massive flash flooding in the Pittsburgh area last week.  Luckily, there weren’t any major injuries reported.  There was, however, a lot of property damage.  Property damage that largely isn’t covered by homeowner’s insurance.

You see, homeowner’s insurance usually doesn’t cover damage caused by flooding.  I learned this when one of my employers was an insurance agency; it was something they made their clients abundantly aware of, partially because they sold these flood policies.  But your average consumer isn’t necessarily as informed.

There’s three basic types of policies.  The first is a Contents Only policy.  This covers your belongings that may be damaged in case of a flood.  This policy seems to make the most sense for renters, because guess what?  Renter’s insurance doesn’t usually cover flood damage either.  In the Pittsburgh area, this tends to cost $55-$743 per twelve month period (or $4.83-$61.92/month.)  This number will oscillate depending on how much coverage you want and what kind of deductible you are willing to pay, as well as the insurance company you choose to cover you.

The second type is a Building Only policy.  This one seems to make the most sense for landlords as long as the only property you have at the address is the building.  In this area, it’s around $381-$1095 per twelve month period (or $31.75-91.25/month.)

The third type is a Building and Contents policy.  Your average homeowner may want to look at this one as they are responsible for both the house itself and all of the property inside of it.  In the Pittsburgh area, rates run from about $129-$1798 per twelve month period (or $10.75-$149.83/month.)  Again, the fluctuation in these numbers depends on who you have your policy with and how much you want covered.

Resources
All numbers were pulled from Floodsmart.gov
They have pretty in depth, unbiased information if you want to explore more.