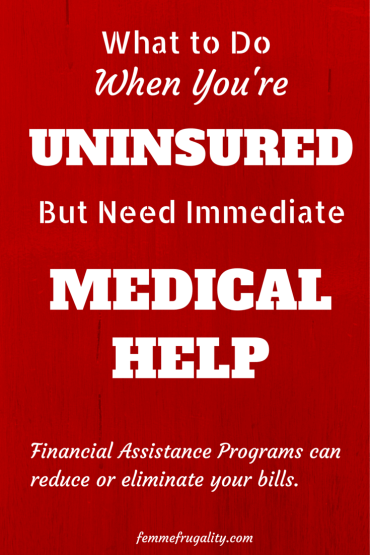 If you’re finding this post via a quick search and need the down and dirty fast, here it is: if you need to go to the emergency room but are worried about the bill, do your best to get to a nonprofit hospital or one you know operates as a charity.  There are better odds that they have a financial assistance program that will help reduce or eliminate your bill.

If you don’t have a nonprofit hospital in your area, just get to the hospital.  Don’t stress about the potential bill right now.  Your life is more important than money.

Don’t Have Insurance? Been There. Done That.

I have a confession to make.: As important as I know and preach it is, the husband and I haven’t always had health insurance.  Our kids have always been covered, but there have been gaps where we couldn’t seem to get our hands on any for ourselves.

We weren’t married until about a year ago, which complicated matters even worse.  I might have coverage, but he wouldn’t be eligible.  We’d have an opportunity to get insurance, but it would cost us $1k/month to take advantage of it.  Which was way outside of what we could afford.

Things have gotten a little bit better with the Affordable Care Act.  But we live in one of the states that didn’t accept Medicaid Expansion.  We didn’t have an alternative in place until this past December with the fruition of the Healthy PA plan.

It’s inferior to Medicaid from a consumer standpoint, and the new governor ran on the promise to replace it with Medicaid.  We’re covered at this point in time, but with how crazy things have been in our state, I know there’s still tons of people out there that aren’t covered.

UPDATE: PA Governor Wolf kept to his word and enacted Medicaid Expansion since the writing of this post.

Get Financial Aid from the Hospital

Just because you’re not covered doesn’t mean emergencies don’t happen.  We had an emergency happen to us at one point when we weren’t covered.  A full on ER bill, physician bill, and all those little, overpriced medical supply bills emergency.  It was almost devastating.

Until we applied for the hospital system’s Financial Assistance Program.  Until 1969, hospitals that operated as non-profits were required to treat people that couldn’t afford care free of charge.

Today, emergency rooms still have to treat you, but they aren’t federally required to waive your bill.  Some states, like New York, have high expectations for their hospitals that claim to be non-profits, requiring them to offer financial assistance programs.

Under the ACA, your bill may not be free, but they do have to offer some type of financial assistance program if they operate as a not-for-profit institution.

Our local hospital that operates as a charity has one of these programs.  To qualify we had to prove that we were below 200 and some odd percent of the poverty line, provide all of our financial documents, and state why we couldn’t afford the care.

UPDATE: You can qualify for these programs even if you carry health insurance.

It’s kind of rough on the ego to become a bonafide charity case, but we were approved for 100% forgiveness of our emergency room bills.  Along with all those other bills that get tagged on when you visit the ER.  Nothing like a few thousand dollars to teach you some humility.

Let me repeat that:  we saved a few thousand dollars.  Should we have been insured?  Sure.  But again, at the $1k/month rate, even if we had been required to pay our bill in full, it only would have been worth a few months of the premium costs.

Even though employer-sponsored health plans aren’t the only way to get covered anymore, we’re still working tirelessly to better our careers so that we can enjoy benefits like that.  We aren’t and never were lazy people. At the time we were working really hard (we still are,) but needed some monetary help to get out of a bad situation that threatened the health of our household.

We’re lucky nothing else happened.  Truly lucky.  Your best bet is to get to find a way to get covered.  But if you can’t, you should still go to the ER when you need to.  Don’t let the emergency room bills scare you away.

Because life itself is more important than money, and if you have a nonprofit hospital in your area, they may just have a financial assistance program that rescues you from drowning in hundreds, thousands, or even tens of thousands of dollars of medical-related debt.