The decision to publish today’s post was not made lightly. This is a personal finance blog, and the below has but loose ties to personal finance. Though white supremacy does engender real consequences for the personal finances of millions of people: the economic oppression felt by minorities when one race or culture is named “supreme” over the others—which is real and dramatic as evidenced by our history. 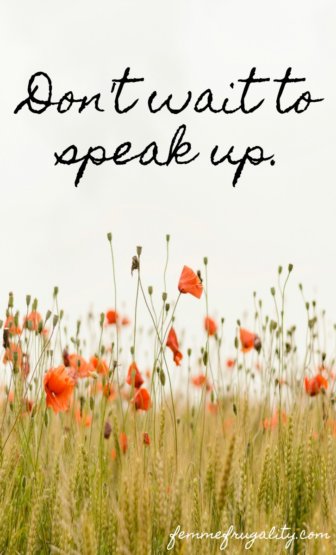 Government-sanctioned white supremacist rallies aren’t something new in the United States. When my husband was growing up in the metropolis of Pittsburgh in the 90s, he ran into them every once in a while as he hopped buses and trains to get to school.

They weren’t exactly the epitome of peaceful, either. Objects were thrown. Threats, both explicit and implied, abounded. All this in a city that I consider to be more than tolerant compared to many others in the US.

But those who were marching in those rallies–in the name of the KKK and unabashed racism–wore hoods. They knew they had to because they were doing something shameful.

What we saw this weekend wasn’t new. If you can pay for a city permit, you can have your voice heard no matter how harmful your words—at least if you’re white and by-and-large adhere to Christian culture.

The Dissipation of Shame

What was different this weekend was that no one felt the need to cover their face. No one felt shame for the hatred they were spewing—the same hatred we, as a nation, fought so hard against with the rest of the world not 100 years ago. The same hatred we are still battling to overcome as we examine our own deeply-ingrained intentional systems of oppression.

The problem has always been here. We are a kyriarchal society who resorted to genocide, slavery and colonialism to build our empire. But in the past few decades, it felt like we were getting better. We were seeing the errors of our ways. We were becoming a more enlightened people. There was pain, and we were far from cured. But we were making forward progress—however slow—in the right direction.

Now we see a pushback. In an election that, like it or not, had questionable enough results to garner an investigation, a minority of the American populace managed to get a majority of Electoral College votes in order to put a man into one of our highest offices whilst he surrounded himself with white supremacists.

Astonishingly, the shame dissipates. The hoods come off.

We need to remember that those who would inspire fear, who would incite violence, who would commit an act of terrorism by turning a vehicle into a weapon, who would claim that they are divinely superior over the “others”—other races, other genders, other sexual orientations, other human beings who were born into a different part of the world or into a different economic class—do not constitute majority political opinion in this country.

The hope is that the majority will keep their heads down. That they freeze up and go about their business until the drama starts affecting them directly.

Because the only thing necessary for the triumph of evil is for good (wo)men to do nothing.*

After WWII, we really wanted to know why people went along with Nazism. We had heard the atrocities. We had seen the camps. So we launched psychological studies. They found that as human beings, we’re able to pass the buck pretty easily. Given orders to harm another human being, participants did so with little remorse.

“It’s not my fault. It’s the guy giving the orders!”

We have an uncanny ability to shut our empathy off in favor of self-preservation—even while in a controlled lab.

Let’s not let all this happen again. Let’s not fall into a world of anti-intellectualism where falsehoods are touted as facts. Where false moral equivalence at a societal level distorts our own, individual moral compasses. Where we create a society devoid of hope.

Let’s not regress to the same patterns of economic oppression our nation has enforced through policy over the past 241 years.

Let’s do less “othering” and start recognizing that we need each other to get through this messy thing called life. We are facing some of the most challenging times in our nation’s history—and really, some of the most potentially devastating times during human beings’ history on the planet. Let’s rally together to lift each other up and remove each other’s obstacles rather than staunchly placing more in the way.

Unless your power relies on oppressing others, the empowerment of others–who have been historically oppressed–is of no threat to you.

What Can I Do?

I’ve found myself grappling with this question for the past couple of days.

I wasn’t able to come up with many answers on my own, but I did stumble upon this list of action items Sara Benincasa put together. It includes ways to raise money–and your voice–for positive causes that work for unity across experiences rather than division.

*This quote has never successfully been attributed correctly, though most people would tell you I just riffed off Edmund Burke.

8 thoughts on “Don’t Wait to Speak Up”