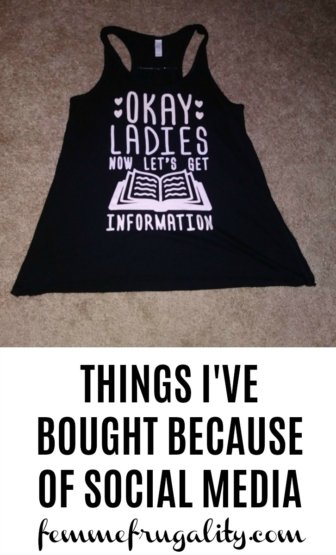 I’m a fairly tight-fisted person when it comes to my money. It takes a lot for me to make a purchase, and a lot of times even when I do, I get serious buyer’s remorse and make a return. Even one of my passions–travelling—typically comes with steep discounts and cheapy tricks.

I’ve noticed, however, that even someone like me can be susceptible to algorithms and social media advertising. I’m not 100% sure that I hate that fact. As I reflect back on the purchases I’ve made because of social media, they’re all things I don’t regret buying. But the fact remains that I probably wouldn’t have purchased them without the social media exposure.

I bought it because I saw it on Pinterest.

The very first purchase I made because of social media happened a couple years ago, not too long after Lemonade came out. I was on Pinterest, and a paid ad popped up in my feed. I don’t even remember which site I purchased from, but it was one of those flash sale sites where the item was only going to be available for a couple of days.

This is what I saw (and ended up purchasing): 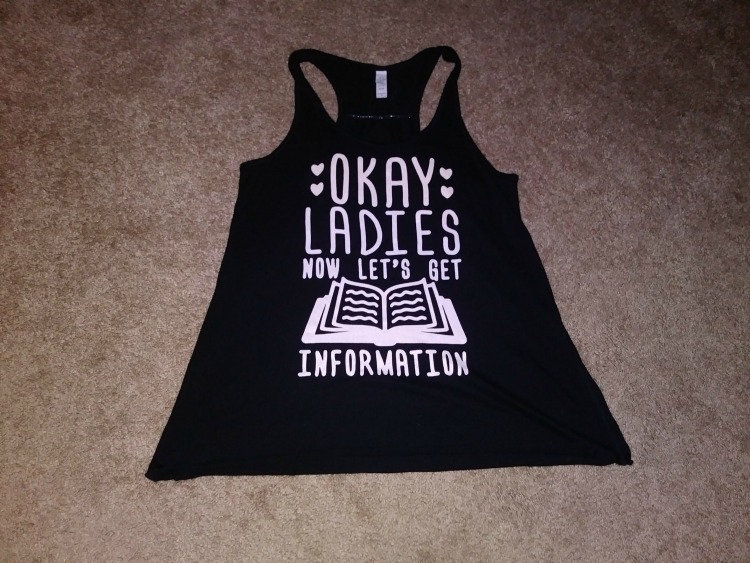 Yeah, I’m in my 30s and bought a graphic tank. I could lie to you and say it’s the only one I own, but I don’t want to deceive you guys.

I knew in that moment that I was falling victim to a few different sales techniques. First, Pinterest’s algorithm was obviously onto the fact that I’m into Beyonce. They probably also know I’m into reading as I belong to a group board for my Around the World in 80 Books challenge.

Also, by running a flash sale, the company forced me to violate my own wait-and-see-if-I-actually-want-it-or-if-I’m-just-getting-caught-up-in-the-moment rule. Well, they didn’t force me. But they did encourage me and I gave in.

The thing is, despite knowing I fell victim to these sales techniques, I have zero regrets about this purchase. It’s one of my favorite articles of clothing, and it’s gotten a lot of use. Per-wear pricing is down into the pennies now.

I bought it because I saw it on Instagram.

On Instagram, I’m apparently very prone to influencer marketing. I have a ton of stuff bookmarked because I want to buy it, but in this case I am following my wait-and-see rule.

But there is one influencer that has gotten me to purchase not once, but twice, over the past few months. Her name is Natalie Benci, and she works in local media here in Pittsburgh. She’s always off doing something awesome, and I’ve done a couple awesome things I only knew about because I follow her.

For example, she convinced me to pay extra for a special exhibit at the Carnegie Science Center:

Thank you to @nataliebenci for bringing @nathansawaya ‘s exhibit at the @carnegiescictr to my attention! We had so much fun at #artofthebrick yesterday–extra loved the #pittsburgh three sisters tribute! . . We went for less by using our ACCESS card. Remember that if anyone in your family is disabled, a foster child, or receiving SNAP or other state benefits, they and up to four family members can get into tons of museums in the PGH area for crazy cheap. Honestly, the Science Center is the most expensive with ACCESS in my experience, especially with the added cost for this exhibit. But I’ll be posting more of our summer discount adventures soon! #disabled #disabledkids #fosterkids #fosterfamilies #welfare #pittstagram #daburgh #goldentriangle #familyoutings #adventureswithkids #savemoney #cheapfun #cityofchampions #yinz #cityofbridges #familyadventures #pgh #412 #pittsburghgram #instaburgh #northshore

Honestly, me and my kids were making some summer rounds to each of the various museums in the area, anyways. But The Art of the Brick was an exhibit you had to pay extra to view (though, as I mention in the post, we did get a discount because of the ACCESS card.)

I might have balked if I had not seen Natalie’s endorsement and experience at the exhibit. Paying extra is something I rarely do at the Science Center.

But it was so worth it. For me and the kids.

Then, there was the time she posted this, and I subsequently became obsessed with GRAMs Pittsburgh:

Be still my heart! We check out new shops along #Lawrenceville’s bustling Butler St. including the new @gramspittsburgh! #wheresNataliePG #SettingtheSEEN

When a birthday rolled around, they had been in my feed enough that I knew they had something that would make a perfect gift. So I went into the store in person and purchased it. I dorkily mentioned I followed them on Instagram, and they surprised me with a social media discount!

I don’t regret spending money on either of these purchases AT ALL, but again, they’re both things I likely wouldn’t have purchased without the influence of social media.

I bought it because I saw it on Twitter.

For my birthday, I got a gift card to Sephora. It was my first time shopping there, and I was pleasantly surprised to find that they carry foundations that are the same price as the stuff I usually buy.

While I was in there, I remembered this tweet:

Y’all I was really out here looking for a new eyeliner and look at this review lmfaooo
She deadass took a picture in her neck brace I am deceased 😩 pic.twitter.com/j9jHjAei06

Because I’m so cheap with my makeup, my eyeliner is always smudging or fading or whatever. I asked if the girl at Sephora if they carried this on a whim, and they did. She grabbed it for me. It was $20–a little more than double what I usually spend on my eyeliner.

But guys. I accidentally fell asleep in it last night and it hasn’t smudged even a little. It’s way easier to apply than the stuff I usually buy, and at this point, I’m pretty sure it’s worth it.

But there’s no way in hell I would have ever spent $20 on eyeliner without being exposed to this viral tweet.

Then there are the times I’ve bought something because I’ve seen it on a blog. That’s a different realm of social media as far as I’m concerned, and most of the bloggers I follow I now know well enough personally that it’s just not the same as being prompted to purchase from a random social media post.

I’m really torn on how I feel about this. On one hand, I don’t regret any of my purchases even one iota. Which is weird for a hyper-financially-conscious woman who almost always gets buyer’s remorse. These have been good purchases if I’m measuring by the amount of emotional distress vs enjoyment they’ve brought me.

But at the same time, I’ve spent money on things I wouldn’t have without the susceptibility social media brings. In the early 2000s, no like medium would have existed to convince me to make these purchases.

The question is this: even though I am happy with the purchases, I’m spending money because I’m being advertised to. Does that expose a weakness in my financial discipline, or is social media doing me a service by exposing me to products and experiences that add value to my life?

I want to hear your thoughts on this one. Because as I sit here, I’m still undecided.

6 thoughts on “Things I’ve Bought Because of Social Media”