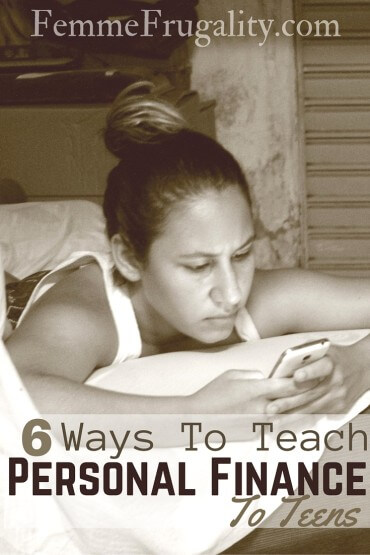 When I was in high school, I got a pretty good education on personal finances.  The lessons didn’t come from my school; they came from my parents.  If I wanted something, I had to save for it.  When it was time to get car insurance, before piggy-backing me onto their policy, I had to call around to several insurance providers to make sure I was truly getting the best rate.  Tuition for school loomed heavily on my mind.

I was lucky.  A lot of kids don’t get a solid education in personal finance.  About half of states have no requirements for it in their curriculum.  Of those that do, much of it is integrated into other subjects.  A lot of parents don’t know where to start, even if they could get their teenager to listen to them.

With this in mind, I’ve put together a list of six of my favorite tools to teach personal finance to teens.  Every last one of them is free.

1. Get a Reality Check

The Jump$tart Coalition is a 501c3 that’s all about promoting financial literacy for kids from Pre-K to college.  There’s some big names that work with the organization, and they do some great things.  One of the great things they’ve done is create this online tool called Reality Check.  Teenagers are generally eager to get out of the house and on their own.  What Reality Check does is pull together average bills and salaries so teens are aware of what it costs to run a household of one.

I entered my own numbers into it.  While it didn’t have room for expenses such as diapers and sippy cups, it was pretty extensive if I were single.  The necessary salary needed to afford my lifestyle ended up not being too far off.  It said I needed to make $22.13/hour.  I need to make a little more than that, and luckily I do.  (More than a little, really, but the nature of my work is not a steady 40 hour work week 50 weeks out of the year, so I’ll spare you the complicated details.)

It also listed jobs that would pay in the salary range semi-fictitious me needed.  Police, detectives, computer support specialists, and post(wo)men apparently all make an average salary that would be sufficient to live my lifestyle.

If you live in an area where cost of living is high, you may want to warn your teen to factor that into the equation.  Averages can only go so far when you’re looking at geographic realities.

Don’t have Personal Finance as a course option at your kids’ high school?  Become the teacher and do it yourself at home.  InCharge Debt Solutions has a series of fourteen free lesson plans that cover the gamut of personal finance: making money; budgeting; being an informed consumer; understanding loans, credit cards, and banking services; and much more.  There are teacher guides, and student guides.  It even includes powerpoint presentations to go along with the course material.

3. Simulate the Horribleness of Credit Cards

A lot of teenagers are going to be familiar with Channel One.  It’s a station schools across the nation tune into for current event news and other resources.  One of those other resources is the Credit Card Simulator Game.

You pick the card you want to use, each one having a different introductory offer and APR.  (None of them have annual fees.)  Then you go on a shopping spree, with the simulator encouraging you to buy as much as you can within your credit limit.  It’s amazing how quickly just a few things add up, both in the simulator and in real life.  Then, you get your bill.  The minimum payment is presented, along with how long it will take you to pay off.  They allow you to play with your minimum payment, to see how paying more can dramatically affect how much you end up paying in interest, and the period of time you’ll be paying.

4.  Let the Computer be the Teacher

Were you met by a lack of enthusiasm when you tried the whole, “I’ll be my kids teacher” thing in number 2?  Then give your kid options.  If they don’t want to listen to you, they can take a free, online video course via the Hands On Banking Program. This one gets bonus points because on top of going over basics like earning, investing, and responsible credit use, it delves into funding college, which is key when you are trying to effective teach personal finance to teens.

The acting is slightly cheesy, but it’s not so bad a teenager couldn’t swallow it.  Especially if they’ve already turned down the alternative of listening to a parent.

TheMint.org is an arm of Northwestern Mutual, and they seem to have this financial education thing down.  There are short, sub-articles under the categories of earning, saving, spending, owing, tracking, giving, investing, and even safeguarding.  Within each category, there are also games, challenges, and calculators that give teenagers a way to interact with the content they’ve just absorbed in a meaningful way.  It allows them to take control of their new-found knowledge, and, truly, their plans for their future life outside of the nest.

Any teenager who plays this game gets a gold star.  Though that may be patronizing, so don’t use that as an enticement.  Most adults don’t understand what the Federal Reserve does, but this game aims to demystify.  It’s called Chair the Fed.  Before the game, you learn about your job.  Your goal is to keep inflation around 2%, and unemployment around 5%.  You do this by respectively lowering and raising rates.  Every time you do so, a newspaper (or online article) headline pops up, commenting on how your decisions are affecting the economy at large.  It’s challenging, interesting, and relevant as the Fed’s current debate on whether to raise rates has been all over the news.

Be glad I’m not in charge.  Everybody had jobs, but inflation was over 11% the first time I played.

What tools do you use to teach personal finance to teens?

8 thoughts on “6 Tools to Teach Personal Finance to Teens”