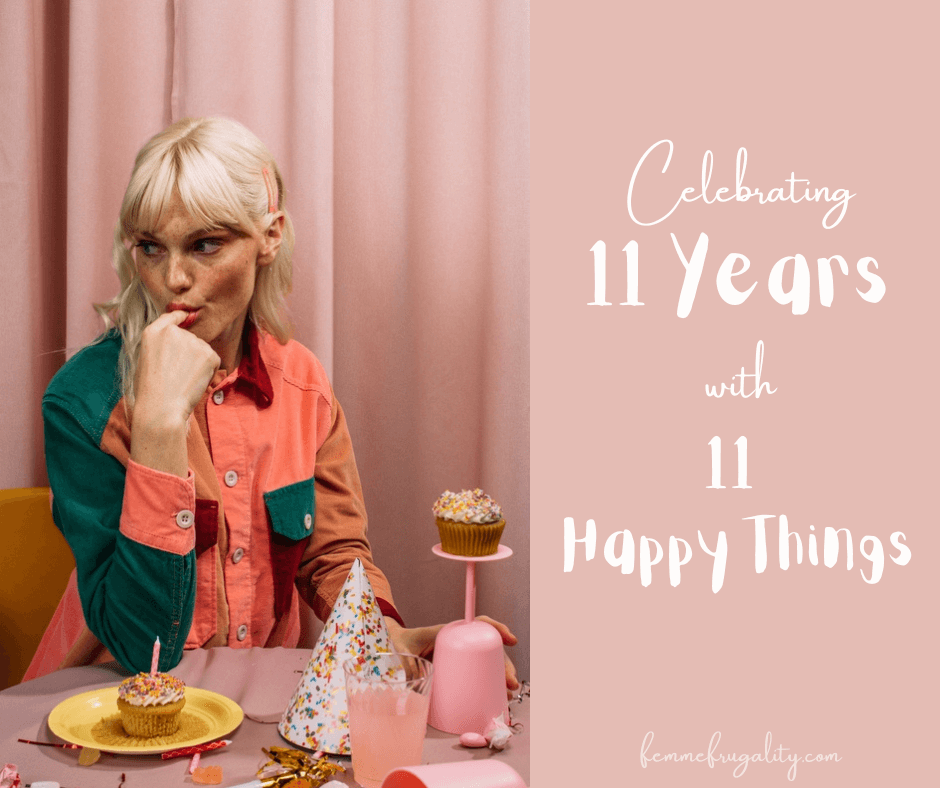 It’s not been my favorite.

That’s an understatement. And I know a lot of you are right there with me.

One of the things that helps me get through times like these is practicing gratitude. Even when the world is a steaming hot pile of garbage.

So today, at the conclusion of a particularly difficult year and what I hope is the dawn of a much, much better one, I wanted to take a moment to celebrate some of the good things that happened between the summers of 2021 and 2022.

Some of these things are Femme Frugality adjacent. Some of them are totally unrelated wins and accomplishments of my peers in the PF space.

All of them have brought me great joy. I hope they bring a smile to your face, too.

Joyce Marrero and I launched a podcast! Mom Autism Money has a pretty self-explanatory name: We talk about personal finance for parents of kids on the spectrum.

We’ve gotten to speak with some pretty amazing guests, and have covered topics you don’t often hear talked about in the personal finance space, like:

Here’s where you can check out the full episode archive.

Bonus on top of getting to do something we love that’s making a difference?

Mom Autism Money was just announced as a finalist for two Plutus Awards!

We’ll be launching Season 3 sometime this Fall, so it’s worth subscribing now on Apple Podcasts, Spotify or wherever else you listen to podcasts. That way you’ll automatically be updated when we start releasing new episodes.

This year I was introduced to a new-to-me content creator, Shalese Heard, AKA the Autistic Travel Goddess. And I’m so glad I was.

Shalese primarily covers travel content. But within that, there’s a whole lot of personal finance content. Because what better way to help you travel the world than establishing some financial freedom for yourself?

Shalese has used tons of creative and outside-the-box ways to fund her travels, which we did discuss a good bit on an episode of Mom Autism Money.

She’s had a TON of wins this past year, from speaking at huge conferences to launching new courses. Be sure to keep up with the latest from Shalese on Instagram and YouTube. 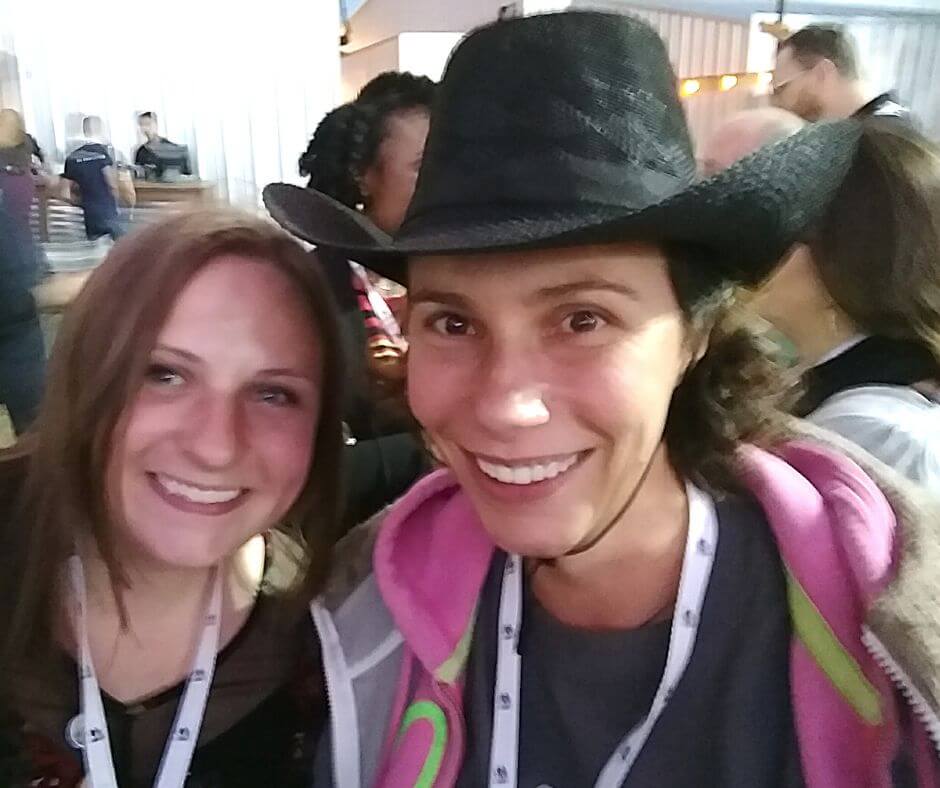 Pauline and me in Dallas back in 2017. I need to get better about taking pictures with people when we spend time together!

My good friend Pauline from Reach Financial Independence spent much of the first part of the pandemic studying away to earn her CFP. And in December, she got it!

Pauline is now using her CFP to work with active duty military members, and doing some charity work on the side.

Pauline is one of the most money-savvy people I know. She’s found incredible ways to use her finances to explore the globe, and has made sure to also use her wealth to support others in all of her communities along the way.

I had an opportunity to chat with Nicole Lynn Perry this year. You probably remember Nicole’s story from The Feminist Financial Handbook. At the time the book was published, she had just secured a job at Amazon. Which was great.

But in the time since, even better things have come her way. Nicole has been working as a paralegal and mitigation specialist for the Lavender Rights Project out of Seattle. This year, her advocacy work and insights have been featured in many major publications, like the Washington Post.

I continue to be impressed by and grateful for all of the change she makes in the world — whether it was her work back in Texas or in her new role in Seattle.

If you’re an editor or writer and want to get in touch with Nicole for like media features, I’d be happy to put you in touch.

I have so much respect for Rebecca not only because she’s a talented, skilled attorney, but also because of her phenomenal character as a human being.

This year, the head of Bedford Family Lawyer received the Nery Arrano award for pro bono work from the Women’s Bar Foundation of Massachusetts.

I have witnessed Rebecca dedicate so much of her career to survivors of domestic violence. I have seen her raise her voice to bring awareness to economic abuse, which almost always accompanies these cases.

It is so nice to see someone who does so much good being honored for their work.

Rebecca shares some super negotiation tips for women in The Feminist Financial Handbook.

6. Cashing Out was published.

A post shared by Julien and Kiersten Saunders (@richandregular)

I met Kiersten Saunders of Rich & Regular in the Spring of 2019, and her perspective on FIRE (financial independence/retire early) blew my mind. I was instantly impressed and wanted to learn ALL THE THINGS from her.

Her approach to FI wasn’t about hustling away your 30s and giving up all the luxuries, but rather about leveraging corporate systems — and then walking away from them — in order to buy back more of your life for yourself. It was also about decidedly making these goals less exclusively white.

This year, she and her husband Julien released the book Cashing Out, which covers all those topics and more. The book teaches you how to quit your job within 15 years without burning yourself out along the way.

They’ve been featured on Good Morning America, Marketwatch, and had a super successful book tour. (More dates may be added — keep up here so you don’t miss one in a city near you!)

I am so happy to see Julien and Kiersten get so much attention for their phenomenal work, and happy for all of us that we get to learn from them with this new tome.

Another great book that came out this year?

I reviewed the book earlier this year here on Femme Frugality, but here’s the synopsis:

It’s a funny, engaging way to learn about personal finance, especially if you’re new to the investing side of the equation. It takes complex topics and breaks them down in a way that will actually keep you turning the pages rather than falling asleep. Hilarious analogies and pop culture references abound!

Emily and Joe have had a lot of success with this book, and you LOVE to see it.

In fact, both Stacked and Cashing Out are both finalists for Best New Personal Personal Finance Book from the Plutus Awards.

And about a million other exciting places, like CNBC and Black Enterprise.

Jackie‘s story, which she generously shared in The Feminist Financial Handbook, is so inspiring. It shows how you don’t necessarily have to be a millionaire to become a millionaire. You can retire early without sacrificing ALL the things, even if you make an average income.

One of her long-term goals has been taking the time to focus on giving back with her knowledge, and it’s been really cool to see her achieve this in such big ways over the past year!

Be sure not to miss her on Rachael Ray.

After some time away, J$ is back and blogging at Budgets are Sexy!

And he and Nate have already brought back the Giving Cards!

I know I’m not the only one who missed J in his absence. He’s done so much to further the accessibility of financial literacy education. He also does so much to give back to the community. If you think the stuff he posts on his blog is kind, you would be so impressed by the goodness he shares with the world when no one is looking. And by the fact that he never mentions it.

Having him back is cause for rejoice.

10. Shanté became a screenwriter for PBS.

And her artistic vision and successes didn’t end there. This year, she became a screenwriter for the PBS show Two Cents. Check it out here! New episodes are forthcoming.

Joyce and I were lucky to sit down with Shanté for an episode of Mom Autism Money this year, too. She’s such a brilliant educator, able to break down even the most super complex financial topics and turn them into digestible lessons. If you aren’t already a member of her Financial Common Cents community, you’ll want to change that fast.

I was honored to speak at Plutus Voices Philly this year alongside the brilliant Courtney Richardson.

We talked about the different ways public policy and personal finance intersect. We touched on some pretty deep and important topics, and I’m hoping to have a video for you all soon.

I have been taking extra care with COVID, so this trip was something that was carefully considered and planned out. I encourage you to be COVID safe, too. For others, if not for yourself.

It was so nice to see old friends again after so long. Especially such compassionate and inspiring ones like Harlan of the Plutus Foundation, Miranda of the Plutus Foundation and the Freelance Writer Academy (<— for any of you looking to break into that field), and Jason Vitug of Phroogal, the YOLO book, and various other financial literacy projects.

It was also really great to meet new people in real life, like Courtney. Who, have I mentioned? Is absolutely brilliant across so many domains. I have learned so much from her, especially in recent months, and I’d highly recommend following along so you can learn from her, too.

I found out that Jason is coming out with another book soon, so be sure to follow him to stay on top of that news!

What good things have happened to you this year?

Obviously, more than 11 happy things happened in the world of personal finance this year. Whether you’re a writer, media producer, or just an individual who paid off the last of their debt this year, I want to hear all about it!

Leave your win or someone else’s win that brought you joy in the comments. Or @ me on social media.

The world can feel so tenuous lately. Let’s point out the things that are definitively celebratory.

Not to ignore the bad. But to give ourselves one, brief moment to recognize the good.