Our honeymoon in Tulum was amazing.  Most of it was filled with nothing but relaxation (which Tulum is perfect for,) but we did manage to get a few outings in the mix.  I’m glad we did, because there are some pretty amazing things to see. 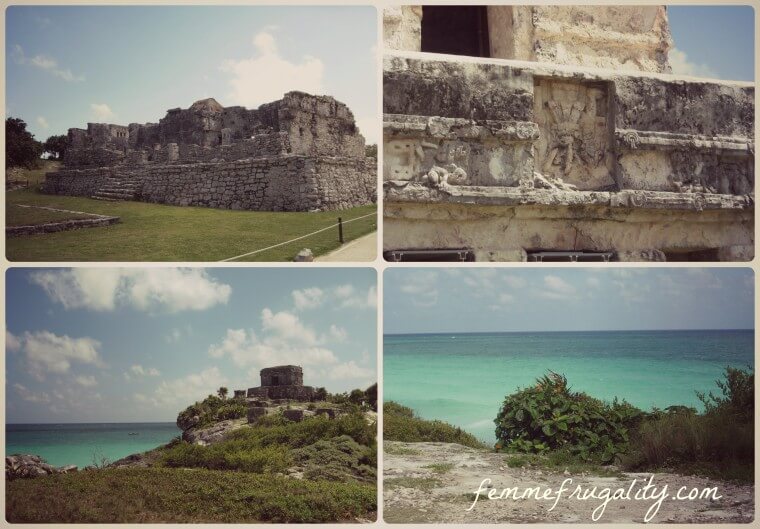 Our first day we took a red-eye flight out of Pittsburgh.  When we arrived in Tulum, we were actually two hours behind because they do not observe daylight savings time there.  So we got to Mexico pretty early in the morning with some time to kill before we could check in at the hotel.  We knew we wanted to check out the Tulum ruins, and they were on the way, so we made it our first stop.

It was about $10 USD/each to get in.  Rather than pay for an expensive tour, we read up on the site on our flight in.  We learned that “Tulum” means “walled city.”  The Tulum ruins are the only ones on the ocean, and were walled in on three sides, with the fourth wall being the sea.  The city used to be called “Zama,” which means “city of the dawn.”  We actually got to see the beautiful sunrise one morning, but more on that in a subsequent post.  We also read up on two of the major buildings:  the Castillo and The Temple of the Frescoes.  We also spotted the diving-god (in the above collage on the top right,) who was believed to protect the people. 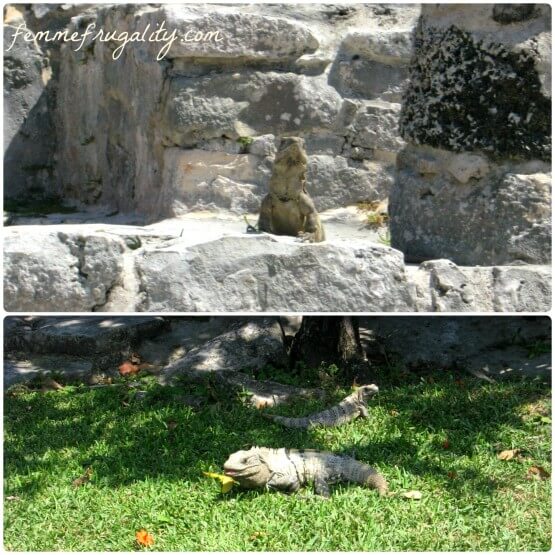 There were iguanas EVERYWHERE!  In the jungle surrounding the site, in the grass of the slight rolling hills, and hiding in the shadows the ruins were casting.  We were expecting them to be everywhere once we saw other parts of the town, but we really only saw lots of smaller lizards.  Which led the husband to the conclusion that they place the iguanas there.  I’m not 100% convinced, but it’s not the worst hypothesis I’ve ever heard. 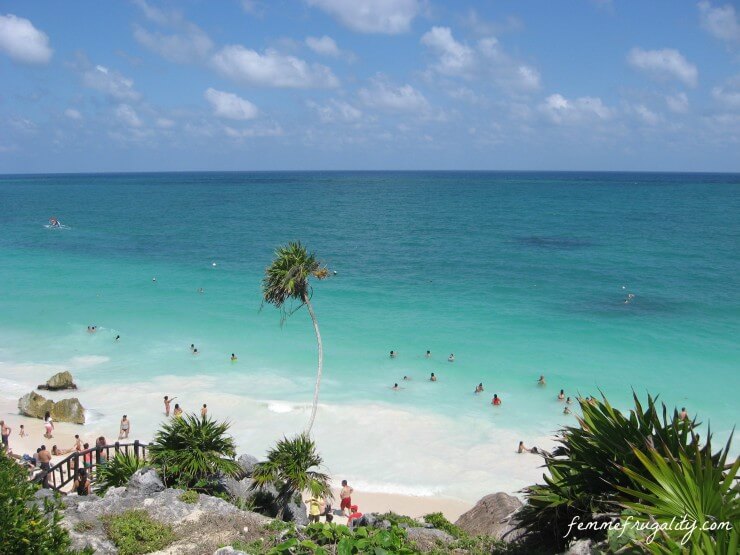 After we saw all the buildings, we climbed down a crazy stairway to a small, but beautiful stretch of beach where (mostly locals) were swimming.  We still had our packs, so we just rolled up our pants, held our shoes, and waded out.  The colors of the beach were indescribable.  Turquoise, cerulean, and every other shade of blue that is vibrant and heavenly crashed in on us as the mild surf hit our legs. 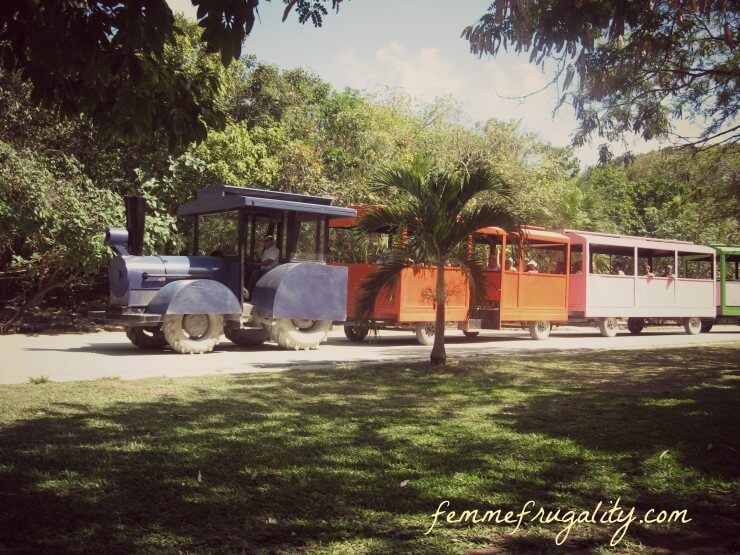 We climbed back up that behemoth staircase, took one last look around, and made our way to the exit.  The ruins themselves are about a 10-20 minute walk from the site entrance, which wasn’t bad at all on the way in.  But by the time we were headed back we were dripping with sweat.  It may seem obvious, but even in Spring it was in the eighties with an extremely high humidity level.  So we opted to ride the tractor train back to where we could catch a taxi to our hotel.  The ride was only $10 pesos each (or a little less than a dollar at the time we traveled.)

The Muyil Ruins and Sian Ka’an

Sian Ka’an is a biosphere reserve and  UNESCO World Heritage Site.  We actually did take pay for a tour here, and I’m really glad we did.  It’s not the kind of place I’d want to be trekking around without a knowledgeable guide.

We found a tour that included a tour of the ruins at Muyil and then a float down a natural canal that the Mayans used as a trade route.  Actually this whole Sian Ka’an thing started as something else entirely.  I saw this beautiful canal in the jungle on Pinterest. It was at a place called Xcaret.

Xcaret is a park and tourist attraction in between Playa del Carmen and Tulum that has a bunch of outdoor experiences and animals to see.  It looked really cool, but then I found out the canal was man made.  And that the animals there were essentially in a zoo-like setting.  I then found Sian Ka’an, where the canals were mostly natural, and the wildlife could be observed in nature.  We didn’t really appreciate how hard-core it was until we got there.  You’ll see what I mean soon.  So if you’re looking for laid-back fun or traveling with small children, I’d recommend checking out Xcaret. It may not be as natural, but there’s no shortage of things to do or see.

So we went to Sian Ka’an instead.  It was an amazing trip.  But I’m so glad that we ended up with a tour guide who was a freelancing biologist.  On the way in, everyone was asking about snakes and crocodiles and other things that go bump in the jungle.  Our guide wouldn’t tell us that we wouldn’t run into those things.  And then he saw the looks on our faces.  Reality was setting in.  He did his best to calm us down.  “Everyone always worries about the poisonous snakes and the crocodiles and the jaguars…”

Internal monologue: ‘Jaguars?  No one said anything about jaguars.  What the *@!$ were we thinking? Is it too late to bail?’

“…but those things are not the biggest danger to you.  What I really want you to worry about is…”

…and then he pointed out smaller things that we had more control over, but that cause more problems to people on tours than jungle cats.  Like super fuzzy caterpillars.  And poisonous trees that were everywhere, but easy to identify. 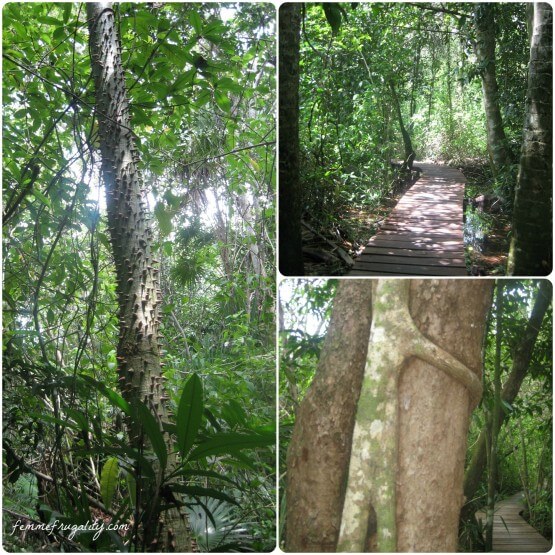 Left: A spiked tree the Mayans call “The Tree of Life.”
Top Right: The path that the Mayans maintain through the jungle.
Bottom Right: A strangler tree parasiting off a poison tree—don’t touch the bark!

The first thing we saw were the ruins at Muyil.  The oldest ones were nothing more than a heap of rubble.  The “newer” ones were still in relatively good shape, considering how old they were.  Our guide was great; he told us everything they knew for sure about the Mayans, but admitted that it wasn’t much.  He didn’t fill our minds with hypothesis after hypothesis, but was thorough with what they did know.

The one assumption that was made was that “the lighthouse”  (bottom left picture) was used to guide people from the ocean, into the lagoon, through the canals, and then through the jungle.  Apparently this was a pretty major trade-route, and the lighthouse would have been a one of a kind structure in function if this is indeed true.  And we did know for sure that the birds pictured below, on display inside the lighthouse and visible from the ground, represented the North and the South, one being warm and one being cold.  There were other ruins further inland (and I’m using the term inland relatively here as the a jungle and lagoon stand between the Caribbean and the lighthouse,) but their significance couldn’t be ascertained quite as positively as the lighthouse itself. 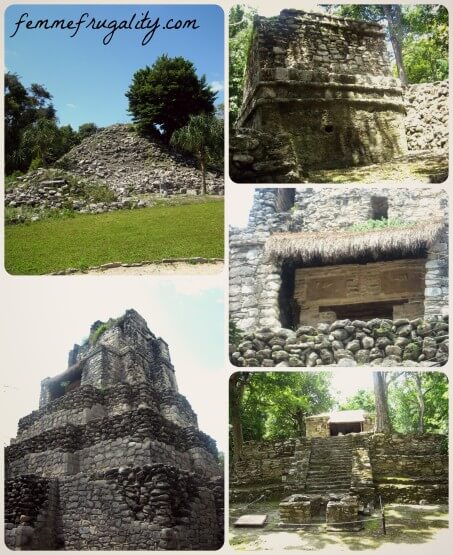 After we got to the lighthouse, our trek through the jungle really began.  We stopped at a post where our guide paid a Mayan man to use the wooden path through an marshy section of the jungle that they maintain.  On all sides there was nothing but trees.  At one point, we turned a corner and our guide signaled to us to be quiet; there was something ahead on the left.  We never saw what it was, and I’m not sure if we were supposed to be quiet because he was a biologist and wildly interested in seeing what it was or because we were in danger if we did see what it was.  Either way, I was a little relieved we didn’t see it.  He told us that if you come in the morning, the dense forest is full of colorful, songful birds, but during the day it’s a pretty quiet place.

Near the end of our jungle trek, there was a huge, pseudo-rickety tower with ladder after ladder to climb that looked out over the lagoon on one side and the jungle on the other.  The view was breath-taking.  And of course I didn’t get a picture.  I didn’t want to risk taking my camera up and then dropping it into the mucky jungle floor far below.

The next part of the journey was the lagoon, and I lack pictures of that as well as my camera wasn’t water-proof.  I’ll share some that others have taken, though.  We road boats across what we were told were uncommonly calm waters.  Usually the wind causes small waves across the surface turning up some sand, but when we went there was nothing but clear, blue waters revealing the bottom of the lagoon, and a myriad of small fish living near the mangroves on the far side where we entered the canals. 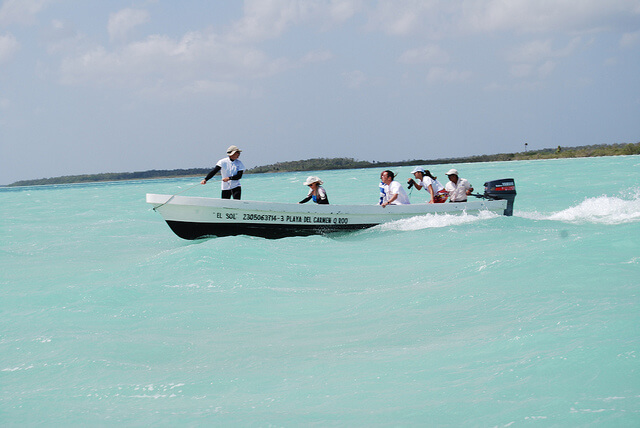 We made our way through canals, both natural and man-made, through the mangroves until we got to the natural one where we would float down the river.  I kept an eye out for baby crocodiles.  I have to talk about baby crocodiles here for a minutes.  Our guide told us they’d be the only ones in the canals in the mangroves.  They come there to sleep.  And they wouldn’t be able to hurt us.  They’re only there because their mothers, who are the most protective maternal beasts ever for the first few days of their offsprings’ life, learn to treat them as competition and prey after they become independent.  Which all takes less than a week.  So the babies hang out in there because the mom’s can’t fit.  It was kind of a relief to hear we wouldn’t be contending with full-grown crocodiles, but I was still wary of finding one of those babies.  The husband wasn’t.  He is mostly a ton braver than I am.

You float along for about half an hour, with the current pulling you.  We went on a day with perfect skies.  You look up from the crystal clear water and see grasses and mangroves shooting up with nothing else in between you and the blue heavens.  It was gorgeous.  Someone else with crocodile fears documented their similar experience, though their guide didn’t seem to know about the babies:

And then when you get to the end, you have to walk back over some marshes, where we actually saw a lot of fish wildlife, like sardines of all ages and sizes.  But this boardwalk is hot, so have access to shoes whether you bring along flip flops on your float or arrange something with your tour guide! 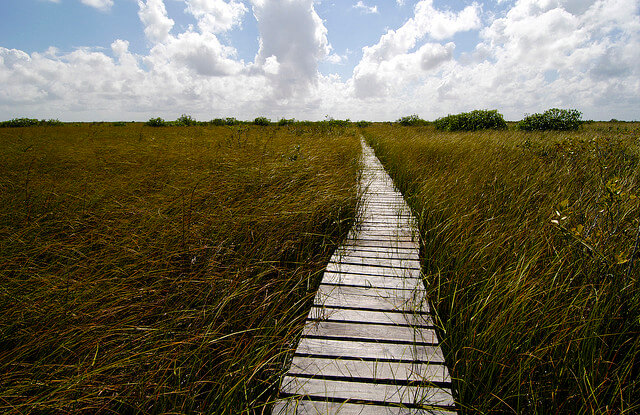 In the end I’m really glad that I stepped outside of my comfort zone.  It was a really great experience. The beauty was worth all my unreasonable apprehension.