This post is brought to you in collaboration with Pittsburgh Oktoberfest. 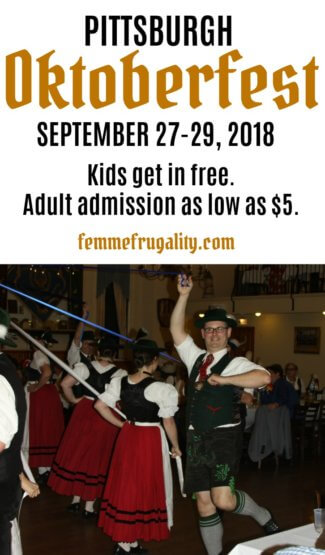 Not too long ago, I made a new friend from Miami. We were talking a little bit about the culture shock that comes along with making a big move, and they pointed out that Pittsburgh has a bit of a drinking culture.

Which I haven’t ever really thought about before, but is fair. We do have the longest strip of bars in the country on the South Side. We also have one of the biggest St. Patrick’s Day parades in the country, and it tends to get a bit boozy–whether you’re Irish or not. Then, of course, there’s Oktoberfest, which at least in my city has become synonymous with binge drinking out of a stein.

The thing is, while drinking may be a part of Oktoberfest, that’s not the only thing traditional about this holiday. In fact, it doesn’t have to be all crazy boozy. At it’s most authentic, it can be a family-friendly–and relatively affordable–event.

I was super excited to learn about Pittsburgh Oktoberfest at Big Butler Fairgrounds next weekend (September 27-29) for this reason. It’s super authentic, super family-friendly, and, yes, there will be good food and alcohol. However, there’s some other crazy fun stuff to check out while you’re there:

There will be tons more going on, too. It’s going to be a fun time.

Okay, get this. All kids age 17 and under get in FREE. That’s huge! Parking is also free.

If you’re looking at going on the cheapest day, you’ll want to attend the opening ceremonies on Friday, when tickets are only $5.

General admission for adults is $15 on Saturday and Sunday.

You could get a full weekend pass, though, which saves you $10 over buying individual tickets for each day and gets you in on Friday, Saturday AND Sunday.

If you’re interested in drinking and networking, there’s also a $40 option which gets you into the businesspeople mixer in the Bier Garden on Friday night. On top of networking and live music, your ticket also gets you dinner and VIP parking.

No matter the package, you can get your Oktoberfest tickets here.

Where are the Big Butler Fairgrounds?

Logically enough, they’re in Butler County–which isn’t as far as you may think. We’re from Pittsburgh, so we’ll measure distance in time, here. Have you ever driven…

…from Moon Twp to Monroeville?
…from McCandless to Heinz Field on a game day?
…from Bethel Park to the Benedum for a Friday night show?
…from the city to the airport? (We all know that trip takes longer than Google Maps wants to admit.)

If so, you’ve traveled about the same amount of time as you would from the city to Big Butler Fairgrounds. It’s not a bad drive at all. Those in the Northern part of Allegheny county will actually have a far, far shorter trip, but it’s worth the trip for those in other parts of the county, as well.

Especially at those prices.

Especially with kids getting in for free.

And especially with wiener dogs racing.

See you there, friends.