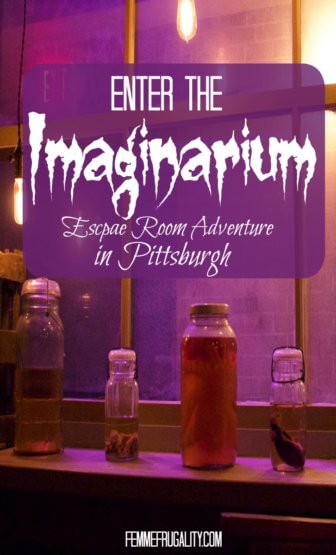 The other week we had the opportunity to visit the Imaginarium in Harmarville.

Guys, it was the coolest thing I’ve done in a long time.

The Imaginarium is an escape room. For those of you who haven’t visited one before, essentially you have to figure out puzzles with little to no explanation before time runs out. In the case of the Imaginarium, escaping one room leads to another.

If you like murder mystery parties, puzzles or Murder She Wrote, this kind of thing is right up your alley. The tour we took, The Inventor’s Paradox, had nothing to do with murder or anything horror-esque though. While it was creepy and involved enough for me to not take my young children, it wasn’t “scary.”

Note: The Imaginarium is recommended for kids ages 12+. Any younger than that, and you’ll have to buy 10 tickets to buy out the time slot.

The premise was that we entered the Imaginarium creator’s mind. Time plays a huge role in this experience as the creator is stuck in the past. Your goal is to release him.

We hurriedly looked around the rooms for clues, tried to use our wits to solve puzzles and in some cases, used blunt force logic to circumvent having to do mental gymnastics. (Okay, this last one was me. And while it sometimes worked, it was far from the most effective method.)

We were in there for an hour before we got buzzed out. It felt like way longer than an hour, though—in a good way.

Ultimately, we failed, though we did make it almost all the way through the second room. 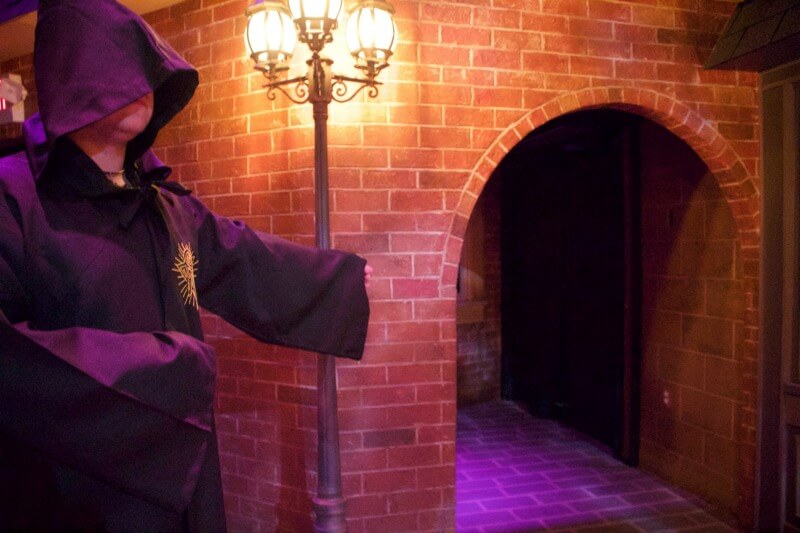 Is the Imaginarium worth the spend?

When we sat down for dinner afterwards, we couldn’t stop going on about it. In a world where our entertainment is primarily digital, Bricolage did a great job creating an experience that was purely physical and exercised our brains in a way we don’t typically experience. I mean, most of the time if we have a question we can Google the answer. Every. Time.

The Imaginarium changes that.

The brain exercise wasn’t the only thing they did well, though. The rooms were extensively staged with real props—no small detail was left behind. The people they had manning the experience were so into it the performance that you really felt like you were entering another world.

I don’t normally advocate entertainment that costs $29.99 per ticket, but this one I do. For two reasons.

While it’s totally worth the spend, I do have a special treat for all of you today! You can use the Rafflecopter below to enter for a chance to win two (2) free tickets to The Inventor’s Paradox! This giveaway is open until 11:59 PM EST on November 21, 2016.

Best of luck! We had a fantastic time, and I know you will, too.

*We received free admission in order to facilitate this review. Regardless, all opinions are 100% honest and my own.*