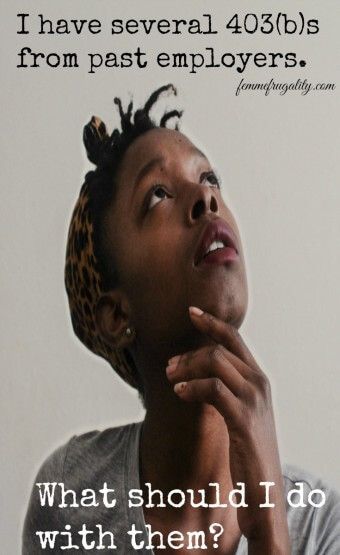 Ever wonder what to do when you leave an employer, but still have a 403(b) from your time of employment? One FF reader did! I pulled in an investing expert, Evan Powers from myFinancialAnswers, to answer this great, loaded question. While the reader is 60, Evan’s advice is great to keep in mind for anyone that works in the education or nonprofit sectors especially in our culture of increasingly transient workplaces.

I have several 403(b)s from different nonprofit jobs I’ve had. What should I do with them? I’m 60 years old.

A great question, and a timely one as well (I’ll get to the timeliness aspect shortly). Generally speaking, once you’ve left your employer, you have three options with your old retirement plan balance: leave it behind, distribute it, or roll it over. Each option has its benefits, but you’re almost always best off rolling your 403(b) assets over to an IRA account with your investment custodian of choice. There are any number of reasons why a rollover is usually the best course of action, but I’ll focus on the top four.

Within the retirement plan landscape, 403(b) plans have long been viewed as the “Wild Wild West”, where just about anything goes—some plans are subject to ERISA regulation, but many are not, and even those plans that are governed by ERISA suffer from lax oversight and minimal employee knowledge and vigilance.

As a result, fees have generally been higher than necessary, as investment options have often focused on annuity and insurance-based products that carry high fees and may or may not suit investors’ needs (a brief history note: when 403(b) plans were first introduced, they were more commonly known as “tax-sheltered annuities” (TSAs), and annuities were the only allowable investments; that restriction was relaxed in 1974, but the focus on annuities has largely remained.)

[Tweet “When 403(b) plans were first introduced, annuities were the only allowable investment.”]

The regulatory bodies have begun to crack down a bit on the 403(b) space in the last decade, and more scrutiny is expected from the IRS in the coming years, but that added attention won’t necessarily do anything to drive down the unnecessarily high fees that continue to plague these plans.

As an aside, even if your 403(b) plan includes a menu of low-fee mutual funds, you still could end up saving money by rolling over your funds to an IRA. That’s because in a 403(b) plan, you’ll still generally be paying some sort of catch-all administrative fee to the plan’s administrator and/or investment advisor. This administrative fee can typically be avoided entirely in an IRA, so you’ll end up ahead of the game even if you just choose to invest in the same (or similar) funds that you had owned in your 403(b).

Fees aside, rolling funds over to an IRA can open up a world of new investment flexibility for you. Typically, 403(b) plans limit themselves to a small number of investment options (often heavily slanted toward annuities, as mentioned above), which limits the investor’s ability to build a customized portfolio. But in an IRA, there are few limitations on investment options, and an investor has the flexibility to invest in just about any publicly listed security (including individual stocks, which are almost never available in employer-based retirement plans).

For some investors, the increased investment flexibility can be daunting, as choice can often be paralyzing—indeed, studies have found that the more investment options an employer-based plan includes, the less money employees will contribute. Such is the paralytic power of “too many options”. But with the help of a qualified advisor, it’s easier than ever to build a coherent retirement portfolio that suits your needs and risk tolerances, at least once you’ve freed yourself from the “limited investment options” shackles. That last point leads us into our third benefit of rolling over your assets.

As promised, here begins the “timeliness” portion of our program. Just last week, the Department of Labor (DOL) issued its long-anticipated new fiduciary rule, which greatly expands the definition of which actions require stockbrokers and other investment advisors to act solely in the “best interests” of investors or clients. This new rule is aimed most directly at IRA plans, protecting investors who had previously been subject to the whims of brokers who may or may not have been operating under some serious conflicts of interest.

Under the new DOL rule, a recommendation from an advisor to roll assets into an IRA automatically triggers the fiduciary standard, which means that the advisor is henceforth required to act solely in the investor’s best interest. For many investors, that means that rolling assets into an IRA can provide more protection than they had in their employer-based plans. That’s particularly true with 403(b) plans—while an increasing number of 403(b) plans are choosing to work with fiduciary advisors, it’s still the minority, and a large number of 403(b) plans remain exempt from fiduciary requirements, even after the passage of the new DOL guidelines.

So, moving your assets over to an IRA could ensure that you’re getting better advice on your retirement investment options. However, be aware that the fiduciary protection that’s promised by the new rules won’t fully take effect until mid-2017, so you’ll have to be careful who you engage with in the meantime.

Finally, rolling several accounts into one will make managing your financial life easier. You’ll be able to better coordinate your various investments when changes to your portfolio are necessary, and life will be much simpler when it comes time to begin making required distributions (RMDs). Instead of having to withdraw money from several plans, you’ll only have one big “master” account to worry about, which makes the overall management much more streamlined.

Rolling your assets into an IRA could also potentially have benefits for your heirs if you have assets left over when you pass away—most 403(b) balances are required to be distributed in one immediate lump sum, but IRAs can generally be distributed to your heirs over a number of years.

Other Considerations When Rolling Over Your 403(b)

Depending on your current and expected future tax rates, a Roth IRA conversion might make sense, at least on some portion of your retirement assets. Such a conversion is typically not available within a 403(b) plan, and only becomes possible once your funds have been rolled into an IRA. That said, understanding the pros and cons of a Roth conversion strategy will almost certainly require contacting an investment advisor, which you may or may not be willing to do.

Also, there are some drawbacks to consider when rolling from a 403(b) to an IRA. One of the major reasons not to roll to an IRA is the potential loss of protection against lawsuits and bankruptcies. While 403(b) and 401(k) assets are almost always protected against claims, IRA assets might not be (the protected amount is usually capped just north of $1 million in assets.) The laws regarding IRAs can vary widely by state, so it’s probably worth a quick call to a local attorney to see what the specific rules and protections are in your location.

[Tweet “Is your IRA protected from potential loss of protection? Depends on your state.”]

Secondly—and this one won’t apply to you since you’ve already passed the magic age 59-1/2 barrier—rolling assets out to an IRA can sometimes eliminate the potential to qualify for “early withdrawal” exceptions. Under those exceptions, employees can often make withdrawals from their 403(b) or 401(k) as early as age 55 without paying the usual 10% penalty, but that ability does not exist for IRA investments.

One final wrinkle: if you don’t anticipate needing your retirement funds any time soon—and if you’ve held your 403(b) accounts for a long time—then a portion of your assets may be eligible for a delay in required distributions, which also disappears once assets are rolled into an IRA. However, that benefit is such a specific and minor one that it’s rarely a reason by itself to overwhelm the benefits of a rollover.

On balance, the benefits of rolling over your 403(b) balances almost always outweigh any potential costs. However, if you have a limited investment background and won’t be comfortable making investment decisions on your own, it’s best to contact a qualified investment advisor (preferably a Registered Investment Adviser operating under the fiduciary standard) for guidance.

Evan Powers, CFP® writes about personal finance, investing, and retirement planning for myFinancialAnswers and Seeking Alpha. A Harvard graduate with an MBA from the University of Virginia’s Darden School of Business, Evan spent a decade as an active derivatives trader and fund manager before making a shift into comprehensive financial planning. He is a Senior Advisor with Cypress Financial Planning, LLC, and he enjoys working with clients out of the firm’s Charlottesville, Virginia office.