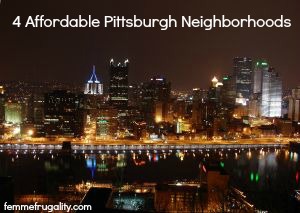 Today’s post is contributed by Emily Creswick of Zillow.  I’m so excited to have her write about a subject so close to home!  (Ha.  Puns.)

Pittsburgh evolved from its “Steel City” roots into a modern hub of culture, high class education and comfortable living. The city boasts a low unemployment rate due to an established university presence and steady economy. Additionally, Pittsburgh is abundant in natural beauty with neighborhoods built on rolling hills, complemented by views of meandering downtown rivers.

Note from Femme:  I’d really stay away from Upper Lawrenceville.  Central and Lower are a great place to live, especially if you’re into the art scene, but Upper starts to get a little dodgy.

UPDATE:  While the median for Lower Lawrenceville is $86,300, if you’d like another metric the average of all three parts of Lawrenceville as a whole (including Central, for which no individual data was available) is around $140,000.  Thank you to reader Angie for providing this information.

Brookline is a family-friendly neighborhood located four miles south of downtown Pittsburgh. It is the second largest neighborhood in Pittsburgh and has a lot to offer, including restaurants, bakeries, hair salons and locally grown produce at farmers markets. Brookline Boulevard is the bustling hub of the neighborhood with more than 90 thriving businesses over a mile stretch. Other family-friendly amenities include two large playgrounds and newly-renovated Carnegie Library. Families in Brookline enjoy a variety of educational options including Pittsburgh Carmalt K-8 and Pittsburgh Brookline K-8. The median home value in Brookline is $98,500 and rent is $999.

Mount Washington and Duquesne Heights are two side-by-side neighborhoods that join to form a balanced and peaceful community, ideal for singles and first-time homebuyers. The neighborhoods are located on the south bank of downtown Pittsburgh, bordered by the Ohio and Monongahela Rivers to the north. The intersection of Virginia Avenue and Shiloh Street is a hub for business and entertainment. The median home value in Mount Washington is $78,300 and rent is $1,058, and the median home value in Duquesne Heights is $114,300 and rent is $1,125.

Highland Park’s median home value of $220,900 and rent of $1,677 is comparatively higher than other neighborhoods mentioned. However, the neighborhood is highly desirable for growing families and is more affordable than close-by trendy neighborhoods including Shadyside and Squirrel Hill. Highland Park is bordered by a 500-acre park that encompasses the northern region of the neighborhood and backs onto the top of the Allegheny River. The park has two of Pittsburgh’s water reservoirs and many family-friendly amenities including picnic groves, a fishing lake, long course swimming pool, volleyball and tennis courts as well as children’s playgrounds and the Pittsburgh Zoo. The southern area of the neighborhood is made up of developed residential streets, but homes closer to the park are more desirable.

Before finding an affordable home in a highly sought after Pittsburgh neighborhood, be sure to complete research regarding the area’s demographics and amenities. A great way to get a feel for a neighborhood is to drive around the residential streets and take a walking tour around the neighborhood’s entertainment hub.

Do you live in Pittsburgh?  Tell us your favorite thing about your neighborhood!