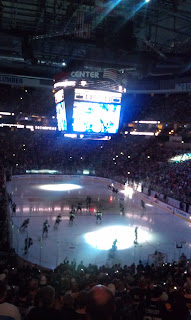 Last week the NHL got its act together, reached an agreement, and started season games.  Really exciting news.  What was even more exciting was Wednesday night the Penguins held a Pens vs. Pens scrimmage and opened it up for free to the public.  FREE.  Starving-for-hockey Pittsburgh fans showed up in droves, and since we’ve committed to having more date nights and the boyfriend loves hockey, we were two of them.

Free parking opened at 5.  Doors opened at 6.  The game started at 7.  We finally found a sitter, battled traffic, and arrived around 6:30.  We couldn’t find the lot with free parking, and imagined it would be full by that point anyways.  But we did find a garage right across from the Consol Energy Center.  For $6.  Not bad at all.  Our timing was perfect.  We didn’t have to wait in a long line.  A LOT of the seats were taken.  But because they were, the only seats they had left were the ones that are typically reserved.  So we got REALLY NICE seats.  We got there too early for them to have resorted to opening up the luxury boxes, but we had a TV screen at our fingertips and cushy, rolling chairs.  If we had showed up much later, we would have been turned away.  The place was filled past capacity.

The game was fun.  I learned a lot about hockey.  I volunteered to spend a large part of the second period in a never-ending concession line as I’m not the Penguins fanatic.  But by being there I can understand why Pittsburghers love their hockey.  There are people drinking at the games, but it’s not the raucous, almost dangerous atmosphere you can sometimes run into at a Steelers game.  Everyone’s pretty good natured.  (At least when the Penguins are playing the Penguins.  I’m sure the dynamics are slightly different when you actually have a rival.)  But there’s also not the ever-present fear of depressive loss that you run into at Pirates games.  Those hockey players are good at what they do, and even if I don’t completely understand what they do, that made it fun to watch.

This date night won me a $5 Amazon code at The Frugalette’s 52 Ways to Get Happy for Free Challenge.  It’s a series worth checking out, for sure.  At the least you enjoy some extra happiness.  At best you win gift cards that defray the cost of parking a bit :p

15 thoughts on “Why That Scrimmage Was a Great Idea”