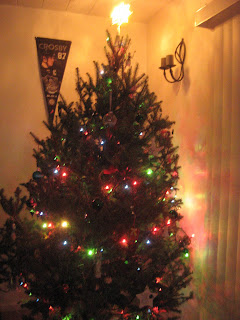 Last year I made a shocking discovery:  our fake tree had a lead content.  I actually read the guide that came with it and there was an advisory to not put presents under the tree until the night before.  With small children, I couldn’t legitimize doing anything other than buying a real one.

I was expecting to spend $60-100 on the tree, which was a real bummer.  But the boyfriend took me to a place in the city that sells them.  He couldn’t understand why I was so stressed out about the budgeting.  When we got there, they had all the same beautiful varieties I was used to seeing in the suburbs (where I lived the last time I bought real.)  The trees were brought in from farms in the boonies, just like the ones I was used to.  The only difference?  The price.  $30.  For any tree.  Any tree.

We talked after and he told me that price was pretty normal.  Some places in the city sell for less.  Some sell for a little bit more.  I have no idea if this is a phenomenon unique to the city of Pittsburgh or if it’s a widespread thing that I simply never knew about.  Either way, check out your tree places in the city.  At least in Pittsburgh, you’ll save a ridiculous amount of money without sacrificing any quality.

*Part of Frugal Friday at Life As Mom*

32 thoughts on “Suburbanites: Buy Your Tree in the City”