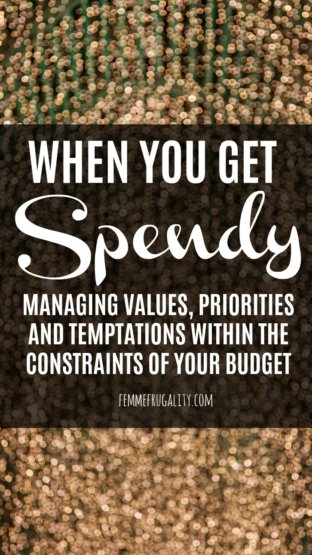 It’s really easy to get high and mighty about our priorities. We judge others when their financial “must haves” are different than our own–when their lifestyle choices differ from the ones that would bring us joy.

Let’s cut that out.

But let’s also recognize those moments of inner conflict. Those moments when temptation can beguile us into spending money against our own values or self-interest. These are the moments when we can become fiscally irresponsible, or compromise our own belief systems in order to save a buck.

As a frugal person who also has incredibly strong convictions, I’ve seen both sides of this coin. While I typically have no trouble sacrificing in the name of financial stability, I definitely have moments of conflict. In an effort to showcase my imperfections–and hopefully help you get introspective about your own–I thought I’d talk a little bit about those challenges today.

When Spending Money on What I Value is Bad

I’m a sucker for great art. The kind of art that speaks to the soul rather than realism. It doesn’t have to be by famous artists as we all have the capability to tap into the stream of human consciousness regardless of name recognition, and I don’t mind paying a little extra to support someone who has created something that moves my soul.

Art isn’t a necessity. At least not for me.

I might really like the visual presentation of a piece, or the melodic or disharmonious chords that somehow wedge their way into my heart, but purchasing these items is a luxury.

I tend to forget that when I’m feeling depressed, though. When we get depressed, we tend to look inwards a lot. That’s not necessarily a bad thing; that journey inwards can help us identify what is wrong in our lives and how we can fix it.

But for me, that also means the connection I make to others’ works seems more powerful during these periods. The connection takes over my rational thinking–and my pocketbook.

Most of the time I’m able to stop myself from going on a spending spree, but there have been a couple times in my life where I paid more than I had budgeted for “extra stuff” because I needed that piece that spoke to me.

What I’m getting out of art in those moments is connection to an artist who was thinking deeply–or at least inspired me to think deeply. Rather than spend over $100 on something I can’t afford, a better way to get this need met is to seek out the people in my life who I know I can have those deep conversations with. That’s difficult to do when you’re feeling low, but it’s also a much healthier way of coping than making a purchase.

When I Have Zero Regrets Blowing Cash

I have itchy feet. I was a military brat, and at a young age became accustomed to relocating every few years. Every time I moved I learned a new vernacular, cultural norms (yes, even on moves within the US,) and discovered a new part of myself.

I love that feeling. It’s a type of fresh independence that reminds me how very little I know and how very much I can change.

I don’t move as often as I did when I was a kid, but that feeling of being on a road destined for discovery has never left me. Hence, travel has become an important part of my life. I need to change the scenery. Get outside the day-to-day. Learn something new from people I would have never met had I stayed in my own little bubble.

Travel is expensive, though. Or it least it can be. I’ve found a ton of ways to cut back on the costs via travel hacking, utilizing services like Airbnb and not being above hitting the road even when a flight would be so much cheaper. These habits definitely help me sate my wanderlust on a more frequent basis.

But sometimes, travel is just expensive. The hotel I reserved in Tulum was crazy pricey, but it was a once-in-a-lifetime thing where I traded luxury and a feeling of security for cold, hard cash. About ten years ago I flew across the continent, then across the Atlantic to Germany to visit one of my dearest friends. Those tickets were crazy expensive. But spending time with him at that juncture in our lives was something that was worth every penny. (Chilling in Bavaria was an added treat.)

Even when my travels aren’t super frugal, taking a trip is something I never regret. I learn things about myself and the world, and those memories and lessons stay with me for a lifetime.

When Ethics Are Worth the Spend

Last year, I switched to clean energy. Our state allows us to pick our energy provider, and I picked the most ethical one in my area that uses Renewable Energy Credits (RECs) to power my rental with solar and wind energy.

It’s about two cents per kilowatt hour more expensive that getting the generic energy. But I want my kids to have a habitable planet when they grow up, so I put my money where my mouth is. This is absolutely impacted by the fact that I can swing an extra $20/month; these alternative energy options aren’t available to those on programs which help low-income individuals like CAP, and in my humble opinion, that’s beyond whack.

I recently moved and made sure they were my provider of choice immediately.

When Temptation Attacks Your Values

Then, there are times when my values are at odds. When I moved into this new place, I received an offer to switch who generates my gas bill. My green provider is only for electricity at this point.

They were offering me a decent airline mile bonus to make the switch, plus I would be getting extra miles for each dollar I spent on my bill every month. Besides that, the rate was two cents lower than what I’m paying now. The frugal travelista in me was all, “Hell, yes.”

Then I saw that the energy they provided was from natural gas–a product of fracking in my area. Fracking has messed up water cleanliness in parts of Western Pennsylvania, and has causing unnatural earthquakes in places like Kansas in recent years. It’s a really terrible way to desperately go after diminishing resources, and something I’ve signed petitions and advocated to my lawmakers to make stop.

Those airline miles, though…

They were tempting, and I almost got to a place where I was rationalizing that I as one customer didn’t make a huge difference.

But I stopped myself. If I wanted to travel so badly that I was willing to do further damage to the planet beyond gasoline or jet fuel, what kind of example would I be setting for my children? That we should try to do better only when it’s fiscally advantageous?

I’m missing those airline miles, but I know not giving into temptation is the right thing to do.

Last year I met up with my mom’s cousin on one of my sojourns. We were talking about my grandfather–specifically what his travels looked like. If you brought up a kink in the plan related to money, he’d always say, “We’ll find a way to make it work.”

And he did. He was very financially responsible, and he found ways to afford the things that were important to him, like travel and time with family. I know I can do it, too. I’ll absolutely still find a way to make travel work, and I’ll do it in a way that doesn’t involve fracking miles.

Full disclosure: I’m sitting on a fair amount of miles right now, anyways. I always like having more than I need, but I don’t want to get all holier than thou without giving you the full story. 😉

What are your values, priorities and temptations—and how do you manage them within the constraints of your budget?

4 thoughts on “When I Get Spendy”