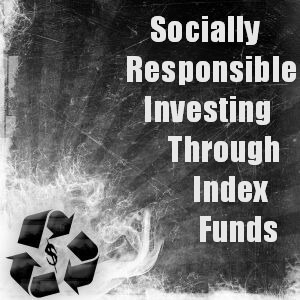 I’m in the process of trying to save up enough money to open a Roth IRA.  From everything I’ve learned, an index fund is the way to go.  I was all mentally prepared for everything when Done By Forty’s article threw me for a loop.  In it, he raises questions about supporting some of the most socially irresponsible companies and not even knowing it…because you’re investing in it through your index fund.

The large consensus from commenters was, “Oh, well, what can I do?  Sometimes evil wins, and I want to be invested in things that profit.”

That wasn’t good enough for me.  I want to make money as much as the next guy, but I’m not willing to sacrifice the sake of our planet and the welfare of my fellow human beings for extra wealth.  So I researched.  And it turns out there’s a whole field of investing dedicated to this exact issue.  It’s called Socially Responsible Investing (or SRI.)

They Have Index Funds!

If you search for an SRI index fund, you’ll find funds managed with social responsibility in mind.  I know what you’re all thinking:  does Vanguard have one?

Hold on a minute.  Vanguard’s fund isn’t outperforming the S&P, but others most certainly are.  Take Parnassus (PARNX.)  They’ve been steadily outpacing the S&P since we started this slow crawl out of the Great Recession.  No loads, and the expense ratio is 0.86%.  Over the past 10 years it’s outperformed the S&P 500 by 1.85%.  It only has 45 holdings, but it’s record is  pretty solid.

The point isn’t to tell you which funds to invest in.  Let me say that again:  this is not an article to reccomend which funds to invest in.  Markets are volatile and I only minimally know what I’m talking about.  The point is that it doesn’t really take that much research to find an index fund that could allocate your investments into companies that aren’t abusing human beings or killing the planet I want my children to grow up on.

Kind of.  Not really.  The way I see it, it’s the same as investing in any other index fund except you’re banking on the fact that the fund will not funnel money into inhuman work conditions or chemical “spills.”  If that’s active, sign me up.  But I’m not going to be picking my own stocks.  That’s the whole reason I want an index fund…I want someone smarter than I am to capture a snapshot of the market, and if they’re going to do it in a socially responsible way that will promote businesses that are, in fact, socially responsible, that’s the fund I want.  Especially since the performance issue seems to be a myth.

But therein lies the moral dilemma of investing in even SRI Index funds:  you are letting someone else make your moral decisions for you.  Unless you keep up on every investment in that fund, you don’t really know if they’re making decisions you’d agree with.  For example, VFTSX’s 4th largest holding is JPMorgan Chase, which is on the list of bad companies that orignally spurred Done By Forty’s post.  So without becoming an active investor, there’s really no way to be 100% sure you support where your money’s going.

But an SRI index fund is a hell of a lot better.  At least they are trying to implement some type of code.

Fine.  I understand that.  But that doesn’t mean you can’t help make changes for better.  Take the investments you have now.  And try these things:

Before I wrap this up, I want to mention Done By Forty’s article one more time.  It’s well-written and thought provoking.  It’s called Hotel Soaps and Externalities.