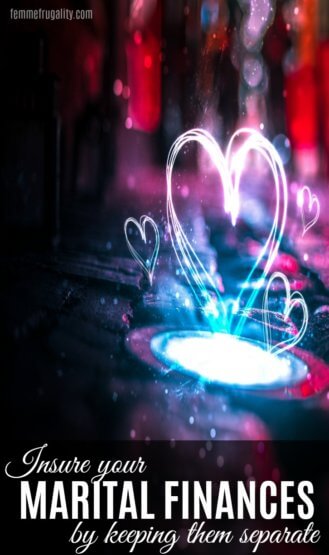 Very few people walk down the aisle with the expectation of pending divorce. Yet only 52% of women will see their first marriage reach its 20th anniversary.

The odds of experiencing this life catastrophe are high. But unless you’ve got money coming into a marriage and drafted a pre-nup, we do almost nothing about it. Most of us do nothing to financially protect ourselves.

To give you some perspective on the numbers, here are some things we do tend to financially insurance against–along with the odds that they will actually happen.

We insure against all of these instances of tragedy or inconvenience, yet only one of them is more likely to happen than divorce.

Insure Your Money Against Divorce with Separate Finances

The cultural default is making all of your accounts joint when you get married, with both partners having full access to all of the money.

But just because it’s the default doesn’t mean you have to follow tradition.

You could just as easily keep all of or a portion of your finances separate throughout your marriage. This allows you to maintain your own savings, and prevents the other person from absconding with money out of a joint account should the worst happen someday.

There are many different ways this can work. Here are just two of them.

Keep everything in your name only. Bank accounts. Car loans. Etc. And have your partner do the same.

If you’re going to have a marriage with separate finances, it doesn’t have to be contentious or self-guarding. You can still work together towards financial goals, budget together, and talk about money transparently and openly while keeping everything legally separate.

In community property states some of your accounts may be up for litigation anyways. But with a joint account, your partner doesn’t have to wait for litigation. They can legally drain the account, hoping your attorney won’t hold them accountable for the funds later. If you can even afford an attorney, that is, now that you’re broke.

Separate accounts create a barrier of litigation, which is better than someone legally just up and leaving with all the cash.

Some couples opt to have their own accounts for things like personal savings, personal spending and birthday/anniversary surprises. Their paychecks are deposited here.

But then they send some of that money to a joint account every paycheck. This joint account covers things like the mortgage/rent, groceries, kids’ activities, etc.

You can split these costs 50/50 or work out  a different ratio that makes more sense for each spouse’s respective income.

Separate Finances Do Not Demonstrate a Lack of Trust

Some argue that if you can’t trust each other with money, you shouldn’t be married. I agree with this. You should be able to talk about money matters and work together towards financial goals.

But some take the argument even further to say that having separate finances is a protectionist move that demonstrates an inherent lack of trust. To this point I argue.

First of all, taking a rational look at the statistics, it’s not about not trusting your partner; it’s about a rational mistrust of long-term relationships in our culture. You have to trust the data rather than your current feelings in the moment.

Second of all, just because you have separate finances doesn’t mean you don’t trust each other. In fact, I view it to be just the opposite.

When you trust each other enough to believe the other partner will follow through on the money moves you have discussed and budgeted for together — even though you don’t have access to their bank account and can’t touch the money yourself — you’re demonstrating the exact definition of trust.

I’m of the opinion that partners that decide on separate finances can have an incredible amount of respect for each other on top of trust. It takes a lot of respect to say to someone, “I know there’s an almost 50% chance I may hurt you someday. I don’t plan on ever joining that group, but I love you and respect you enough to encourage you to protect yourself. I’m not going to take offense.”

But we’re never going to not be in love.

But so many people before you have thought the exact same thing and ended up divorced. Women in particular tend to end up on the short end of the financial stick. They’re more likely to have cut back their careers to support the marriage, have gaps in their resume, and are often thought of as adversarial (even when they’re not) by a judicial system that is dominated by male officials.

If you’re reticent to believe me, I’d highly encourage you to research Terry Hekker’s story.

At the end of the day, we can’t let our feelings cloud our judgement. The numbers show a statistical likelihood of relationship breakdown that can’t be ignored.

We wouldn’t ignore those numbers if we were talking about car accidents.

We wouldn’t ignore those numbers if we were talking about house fires.

We wouldn’t ignore those numbers if we were talking about death.

It’s financial folly to ignore these numbers simply because we’re in love.

This is a part of the Personal Finance Pro/Con Series organized by PeerFinance101. You can read the opposing view here.

14 thoughts on “Insure Your Future Self with Separate Finances”