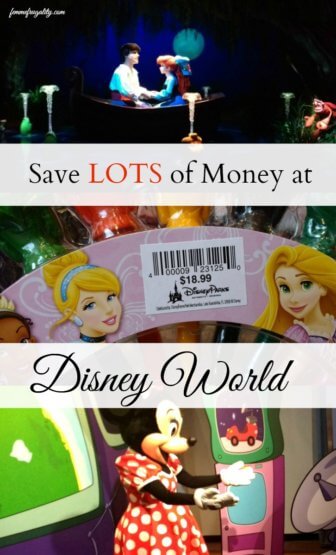 A few months back, we took a road trip down to Florida. We were going to a wedding, and a family member had gifted us a week at their timeshare in Orlando as a Christmas present. We couldn’t have gotten out of going to Disney if we wanted to.

Of course, we wanted to go. It’s just an expensive trip, so it’s not likely one we would have made on our own. We had a bit of a mixed experience once we got down there, to be honest with you, but Disney has worked to make amends for the negative experiences we had.

The positive experiences were great, though. We got to meet a bunch of characters–most of whom were awesome. One of my kiddos ended up being the rebel spy on board our ship on the Star Wars ride. And a live performance of Frozen brought us to tears.

Yeah, that last one really happened.

We did a few things to save before we went. First, the timeshare was free, and we were able to dodge the sales pitch. We also travel hacked our tickets. They weren’t free, but they were insanely cheap.

Once we got there, though, I realized that there was more I could have done to prepare. To save you from making these same follies, I thought I’d share my learned-from-experience Disney savings advice.

Before I had gone to Disney World as an adult, I assumed the best way to ensure the kids met the characters they were in love with was by scheduling a meal with them. So we scheduled a couple of them.

We chose the cheaper buffet option when we dined at Disney restaurants to meet with characters, but it was still pricey–between $30-$60 per person.

Here’s what I wish I would have known before we left.

The Lines to Meet Characters Aren’t that Long 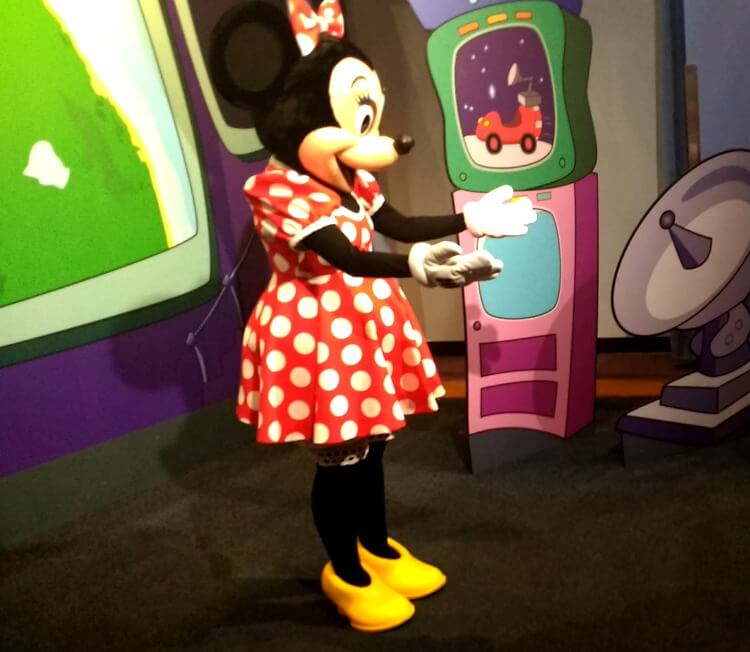 Minnie Mouse at Epcot was so, so great with the kids!

If there’s a designated place to meet your character of choice, you can simply wait in line to meet them and take pictures without paying an extra dime. We met…

…in this way. If I had known there would be so many opportunities to do this, I may have cut one of our character dining experiences, and saved a ton of money in the process.

From what I saw walking around the parks, the lines for these meet’n’greets weren’t that long. And we were there at the end of May, which I understand to be a pretty popular time to visit.

Dig around on the Disney Experience App before you go. You’ll be able to see where the meet’n’greet opportunities are, and a quick google search should be able to tell you if your character of choice has crazy long lines.

Worst case scenario, you can use one of your Fast Passes for extremely popular characters.

Disney’s attractions include a whole lot more than just rides. For example, we got to meet Belle at Enchanted Tales with Belle. 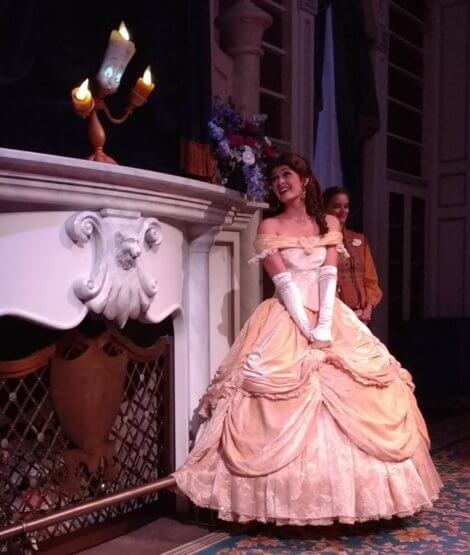 The upside to this was that our kids got an up close and intimate experience, performing a play while interacting directly with Belle.

The downside was that the line was insane. Even with a disability pass, we waited somewhere between an hour and an hour and a half after we got in line. Granted, this is an extremely popular attraction right now as the new Beauty and the Beast movie just came out, but it was still less than fun.

Arguably worth it once we got inside.

For the Frozen performance we attended, there was also a bit of a wait, though nowhere near as bad. Your kids didn’t get to meet and hug the characters for this one, though we didn’t expect that to happen and really loved the over-the-top performance.

Read the attraction description to see just how up close and personal the experience will be, and then weigh if the wait time is worth it, or if you’d rather pay to sit down and eat a meal while the characters make their rounds to your table.

Ugh. The biggest money mistake of our entire Disney trip was not buying the kids things they wanted while we were in the park. I did want to get them a souvenir or two, but largely I told them to wait until we got home and then Mommy would buy it cheaper online.

I took pictures of UPCs and everything. 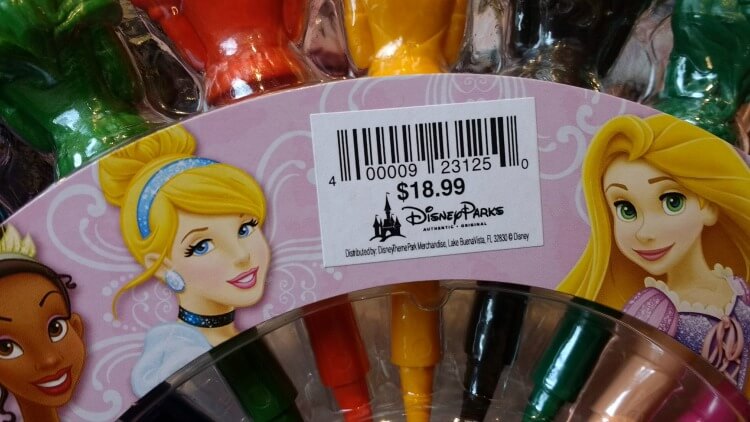 SURPRISE! Disney has a separate line of products that they sell exclusively at the parks. The internet seems to be aware of this exclusivity. When people resell items from the line, the price is way marked up.

I had promised my kids I’d get them this stuff, though. We have lots of conversations about sacrifices and trade offs when it comes to money, but this was something I had explicitly told them I would buy later in order to stave off tantrums.

Because I’m not a fan of breaking my promises, I’ve been filling in an item or two for birthdays, and Santa will probably help out a bit at Christmas. The number of presents they receive isn’t as large as it would usually be if I weren’t buying already-expensive-and-then-marked-up-even-more Disney products. But they’re happy because it’s something they really wanted, and I’m happy because I’m able to not be an evil liar.

The Things We Did Right

Central Florida is insanely hot in May. Thankfully, this was one area where I did something right.

Buy Your Own Cooling Towels

Cooling towels absolutely saved us on this trip. We got Frogg Toggs Chilly Pads, and I highly recommend them as they worked amazingly well. I would not recommend their other cooling products, though.

You wet them down and lay them around your neck. As the water evaporates, it cools you down. The water takes a long time to evaporate, too, so we weren’t stopping at a water fountain every five seconds.

Once we were inside Disney, we saw Disney-branded cooling towels everywhere–primarily donning the face of Mickey or Minnie mouse. They were $20/piece. If we hadn’t been prepared, I would have broken down and bought them, price tag be darned.

If we were going to be there, we needed them. Otherwise we would have had to cut all of our days short. Buy yours before you get into the park so you don’t get robbed. Kmart has them for half the price.

Bring Your Own Water Bottles

You are allowed to bring coolers into the park as long as it meets size guidelines and doesn’t contain glass or alcohol. We packed ours full of water. Yes, it was heavy. But so worth it.

We usually had to buy more water about half-way through the day at park prices (I’m a weirdo about fountain/tap water,) but if we hadn’t brought our own supply at the beginning of the day, we would have had to pay park prices twice.

We also found that we had enough room on all the rides to put the cooler by our feet. We weren’t riding any insane roller coasters, but even on the Dumbo and Little Mermaid rides, we had no issues. 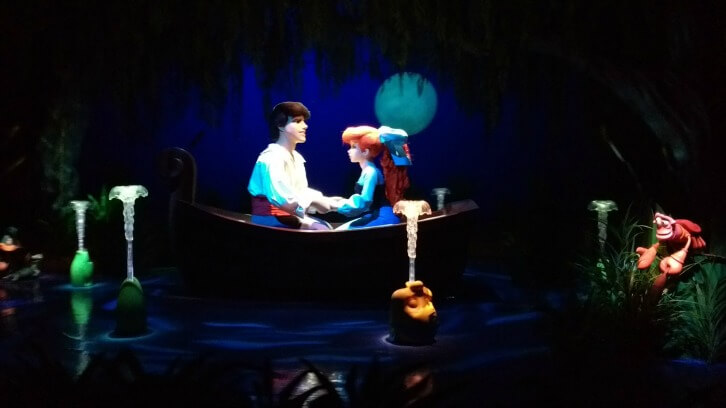 Can you do Disney World on a budget?

Absolutely. We did it relatively affordably this time, given that it is Disney. We plan on heading back in the next couple of years. This time, we’ll have some pro experience under our belt to safeguard our budget even better.

16 thoughts on “How to Save Money at Disney World”