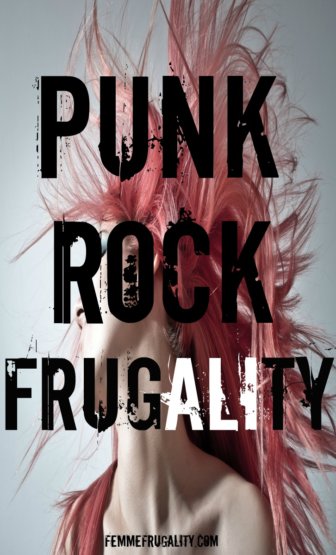 “You have to take that thing out of your face.”

I was eighteen, and I was pissed. To get that thing in my face in the first place, I had a needle thrust straight through a nerve. I had chugged water for 24 straight hours afterwards, and had to wait six weeks before I could put a stud in my labret that was actually flush with my face.

The woman who so gently prodded me to remove my labret piercing was my long-distance boyfriend’s mother, with whom I was living. She was urging me to go to a temp agency so I could get a “real” job, because delivering pizzas and selling makeup wasn’t cutting it.

It was a fair request. I was just upset that conformity was the price I had to pay for her giving me a rent-free roof over my head.

Did I mention I was eighteen?

The best part? I took the stud out. It healed quickly as oral piercings tend to do. I dressed in conservative clothes and went down to the temp agency. I clean up well.

But still I got no call back.

Even pre-recession, getting a job in a city where education is one of the top two sources of GDP with only a high school degree and some mad Excel skills was not going to happen. It’s the only interview I’ve ever been on that didn’t result in a job.

I ended up working my third job at her husband’s small business.

I’m bitter about removing my piercing, but they were actually doing me a great kindness, and I knew it at the time as well as I know it now.

The Price of Conformity

A few weeks ago my husband’s band played their first paying show. He made five dollars—woot!

I was getting ready to go out for the big event and realized I didn’t have anything that was appropriate for a thrash punk show at a local bar. Over the years, my wardrobe had become decidedly conservative.

I blame the removal of that piercing as the first domino.

But I had a dress. A cheap, formless dress that had somehow shrunk in length but not width after washing. I looked at it and had an epiphany.

This is a punk show. Altering your own clothes with safety pins is encouraged.

Reason 248 that I <3 punk shows: they lend themselves to 10 min #DIY wardrobe fixes. #frugal pic.twitter.com/boaXygxjTG

It had no hem. The neckline was held together with a safety pin. I accessorized it with a piece of crazy cheap costume jewelry I had picked up for Halloween.

I haven’t gotten that many compliments on an outfit in a long time.

It reminded me how much I missed the punk rock lifestyle, and how much frugality is interwoven into it. That’s probably what attracted my cheap self to it in the first place all those  years ago.

Altering your own wardrobe is far from the only frugal thing in punk rock. The more I think about it, the more I see analogous parallels. Of course, there are a few contradictions, as well.

You know those Jonses everyone is so concerned about keeping up with? Punk rockers don’t care about them in the least. They’re going to wear their hair the way they want, shop at the thrift store in a show of anti-consumerism, live in apartments that are affordable, and fight the man that lines the Jonses’ pockets at every turn.

I see the same life decisions in those I know who have embraced extreme frugality. They may not dress the same or have identical in-your-face attitudes, but the cultural norms within each fringe culture can lead to some of the same end decisions.

They can lead to self-actualization, as well, which is something money cannot buy. In fact, removing yourself from the cycle of consumerism may be the quickest way to reach those epiphanies.

There have been a few people I know that I’d classify as punk rock that simply haven’t grown up. While it’s good to fight the man, at some point you have to be a (wo)man. Rather than railing against everything that keeps you down, you need to empower yourself to make things happen in your life. I promise you can still do it with a mohawk and studded jacket without selling out.

I’ve known plenty of punk rockers who have, but some definitely take the attitude too far to a point where it’s permanently self-destructive.

While some punk bands sign with major record labels, more have created or joined independent labels, creating businesses where there once were none in the fields of art, recording, distribution, promotion and media. This is the opposite of the Peter Pan syndrome; you can still fight the man and be successful in your own endeavors, creating a job for yourself and opportunities for others along  the way.

Sex is irrelevant to this post. It’s your body. Be careful and wise. But I’m not going to pass any judgements on what you do with it with consenting partners.

But drugs and alcohol? These can definitely be an inherent problem to the culture. Not just for your money, but for your life.

Within the punk rock community, there is a group that classifies themselves as straight-edge. They don’t drink, smoke or do drugs. Ever. If you’re a member of this group and violate its moral code, you’ll be pushed outside the circle.

That’s a lot more intensely healthy than many of my more conservative friends—or myself, if I’m honest. And it saves you a ton of money over the course of your life.

Punk rock culture organically instills a lot more frugality than our mainstream, consumerist culture. It can also lend itself to anger and resentment. Channeled correctly, these can be forces for big and positive change.

But channeled incorrectly, they can become self-limiting beliefs. You may always live frugally, but that doesn’t mean you’re building something better for yourself. If you view the act of having or achieving anything as selling out, you’re negating any opportunities to grow, establish stability or change the world for the better.

I’ve become comparatively more culturally conservative over the years, in my own outspoken and obvious-to-long-time-readers liberal way. My husband quit the band, but I intend to keep going to punk shows. If for nothing else, to remind myself that it’s okay to be frugaltastically me—whether my shirt has a hem or not.