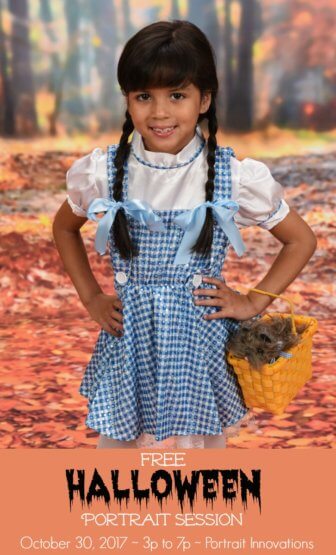 When I lived in Idaho, I didn’t yet have children. That didn’t stop one of my parent friends from giving me some unsolicited advice one night. It was the kind of advice you’re grateful for.

“You know the one thing I regret? When Avery was a baby, I didn’t do the whole photo thing. You know–at the hospital, three months, six months–whatever. And that time just went by so fast. I thought it was a waste of money back then, but now I really regret it. I have random pictures, but no milestones to watch her grow.”

I bookmarked those words in my brain. A few years later, when I did have my own children, I was sure to make all those photo appointments. I made sure to shop around for the best deals and freebies I could find. I’m glad I did.

Then, just a couple of months ago, I learned about a studio I hadn’t been to yet. For whatever reason, I hadn’t come across a coupon amidst all those maternity store coupon packages or my erratic Groupon hunts.

I wanted to check it out, and the folks at Portrait Innovations were kind enough to invite me in for a free session.

Usually when we get into one of these portrait studios, there’s not a whole lot for the kids to do. There are chairs to sit on, and if we’re lucky, there’s a TV playing some random cartoons.

Not so at Portrait Innovations. I got to relax on one of many insanely comfy and plush couches while the kiddos entertained themselves at the LEGO table.

One of my children is super hard to take pictures of. In the past, when we’ve been trying to select which pictures to order, we’ve found ourselves asking:

“Which photo do they look least unhappy in?”

Our photographer at Portrait Innovations was fantastic. She elicited smiles from everyone. In many of the pictures, she even managed to get everyone smiling AT THE SAME TIME! It was a modern miracle.

She let them be comfortable and be themselves, catching moments as they happened with only light staging. If they weren’t into a particular pose, she wasted no time letting it go and moving on to the next.

When they were done and started getting a little moody, we had no regrets ending the session. We had loads of great pictures full of smiles and siblingly love.

At every other photo studio I’ve been to, we’ve huddled around an old-school behemoth of a PC–bouncing kids on our hips as we stood there trying to pick the best pics through their screams.

At Portrait Innovations, we got to sit in chairs around a huge, flat screen TV. They’d show us three pictures at a time so the selection process wasn’t overwhelming. We didn’t have to worry about fussy children because one of them was really into seeing themselves on a big screen, and no one made us feel weird about the other’s repeated just-for-fun trips to the water fountain.

I was also reassured by the fact that if things did start to go downhill, we could redirect back to the LEGO table.

Every studio you go to they will try to upsell you. It’s not a bad thing always–sometimes there really are great deals.

But sometimes the photographer will get frustrated with you if you’re not biting.

At Portrait Innovations, I got zero ill vibes when I said, “No, thank you,” to multiple upgrades. It was a much better customer experience than some of the other studios I have been to.

Portrait Innovations is the only studio I’ve been to where they print your order right then and there. No waiting two weeks for them to get mailed in. No contorting your schedule to drive back out to whichever suburban mall you had them taken at.

It took about 20 minutes (I got a CD, too,) and when they came back, I was thrilled. The print job was great. For only the second time since I’ve had kids, I’m sending out holiday cards this year–which were printed for me right there in the studio. We also got some wallets, 5x7s, 8x10s and 10x13s.

When I showed the pictures to their dad the next day, he was floored.

“These are great! Like, wow! They’re even smiling at the same time! You just did this yesterday?”

You can get a free session, too.

You didn’t think I was just going to tell you about my free session, did you?

Nope! I’ve got your back with not one, but TWO ways you can get a free session at Portrait Innovations, too.

Free Halloween Photo Opp for Everybody

On Monday, October 30, Portrait Innovations will be hosting free photos for kids in Halloween costumes from 3p-7p. They’ll be passing out candy and all!

On the photo side of things, you’ll get:

This is happening everywhere–not just in my hometown of Pittsburgh. Find a location near you.

Oh, and after the free event, you’ll be able to enter your kiddo into a portrait costume contest. The prize?

The top 20 portraits with the most amount of votes will take home the prize!

Another way to get a free session at Portrait Innovations is by entering the giveaway below. One lucky Femme Frugality reader will get a full portrait package to be used in the next 12 months. Here’s what will be included:

To enter, use the Rafflecopter below. Many of these entry options can be done multiple times, so be sure to come back for more entries before the winner is selected on October 23 at 12:00a Eastern!

In addition to the free portrait package mentioned above, I also received payment for my time writing this post. All opinions are 100% honest and 100% my own.