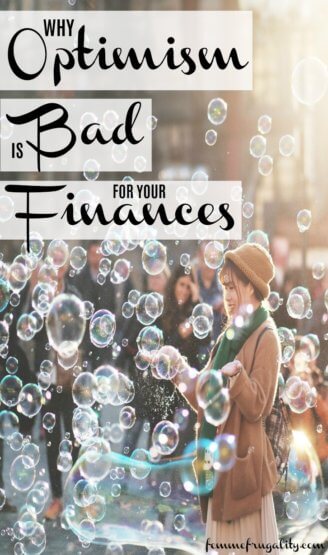 A few months ago we talked about how PTSD can make investors more risk-averse. This was especially worrying for females with PTSD, as women already tend to set their investment goals lower than men while also living longer. Missing out on the gains of riskier investments early on, compounded with already insufficient goals, means you’re a lot less likely to be ready for retirement.

Then, a little over a month ago, I wrote an article that examined why people take on huge loads of debt–even when logic would dictate that doing so would be bad for them. It turns out, one of the factors is your optimism levels.

We all have different levels of optimism, and the more we have of it, the more likely we are to envision good things happening in our future. Which can be good when you’re investing, but not so great when you’re taking on debt. Because the future of your money situation is unpredictable, and you might not be able to repay as readily as you’re anticipating.

That got me thinking about other ways optimism may negatively impact our finances.

Yes, I realize that is an incredibly pessimistic line of thought. But I’m going to relabel it “pragmatic,” because it turns out, too much optimism can be bad for your money in several ways.

Optimism bias is when we overestimate the likelihood of positive events.

This is incredibly dangerous when applied to something like gambling, where the odds are quite blatantly not in your favor. Even if you’re familiar with the probabilities of winning mathematically, you optimism bias can make you feel like you’re special, and that if you just play long enough, you’ll be that one person who beats the system.

Yes, we did just say that being risk averse is a bad thing in investing. However, being overly optimistic can be a bad thing, as well.

Allan Schwartz, LCSW, Ph.D. points out that prior to the Recession, there were warning signs. But optimism bias got in the way for many big investors, so the signs were ignored and the effects of the Recession were magnified.

There’s a lot of ego in entrepreneurship. There has to be. You’re constantly selling yourself and/or your product, and you need people the believe in your value. If you don’t believe in your own value, you’re not going to get clients or investors to hop on board.

However, if you buy too much into this ego–to the point where you believe you cannot fail–you run the risk of ignoring real and significant problems in your business model, product or personal abilities. If you ignore these problems long enough, they will catch up with you–no matter how much you believe in yourself.

Extreme optimists are less likely to save money than their more pragmatic peers. The reasoning behind this is simple, and very similar to the reasoning that gets overly-optimistic people into debt: You overestimate your ability to bring in large sums of money in the future.

Have debt? Have a gambling problem? Have zero savings?

But we all know what happens when you refuse to acknowledge a problem.

You debt piles up. You drain the bank account to feed your gambling addiction. When an emergency does happen, you don’t have any funds to cover it.

Burying your head in the sand is a comforting sort of optimism, but it’s not going to help you get ahead or fix the problems in front of you.

Almost every study I’ve read on this topic says that despite its drawbacks, optimism bias is still a good thing. Without it, our species may not have made it as far as we have.

Our ability to predict our own death is depressing, but with optimism bias, we’re able to find ways to prevent that death and fight off depression. We’re also willing to take risks that result in progress–either on a personal level or for the entire species.

People who are optimistic in general tend to earn a higher paycheck, and are more willing to take on those riskier investments earlier in their career.

Optimism bias is a good thing for our species in general.

While this same overly-optimistic trait isn’t good for our personal finances, that doesn’t mean optimism is bad. It just means we need to temper our financial optimism with some realism.

We need to look our debt and other money problems square in the face.

While it’s good to believe the future will hold good things for our career, we need to save just in case things don’t work out the way we’re hoping.

While it’s good to believe in your marriage, you also need to prep your finances in case you become one of almost 50% of women who don’t see their 20th anniversary.

While it’s healthy to take risks, we need to draw a line in the sand. One that establishes when the odds are too great to overcome–even for our own optimism.

So go on. Be happy. Believe in a better future. Believe that you can manifest all the money in the world. But don’t believe in it so hard that you allow yourself to think it’s a sure thing. You still have to hedge against risks, even if you think you can overcome them.

12 thoughts on “Being Too Optimistic is Bad for Your Finances”