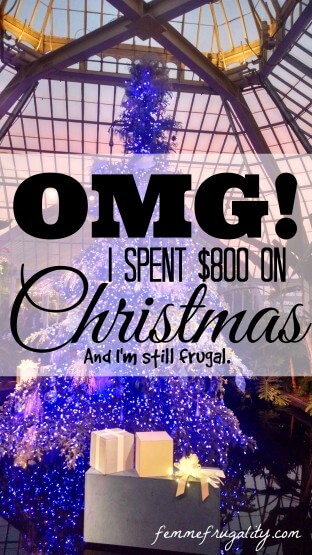 There’s a number floating around the blogosphere. The average American family spends about $800 on Christmas gifts. The number I was able to find says $882, but the exact figure is kind of irrelevant.

Half the money blogosphere is in shock over such massive consumer spending. “How could you drop that much money?” “Do you know all the other things that money could have gone towards?”

Meanwhile, the other half shakes their collective heads at how much time those frugal lunatics have been wasting cutting coupons, when they could have been working and earning more per hour than they saved with their scissors.

This happens every year. My first year in the game, I was firmly in the frugal camp. I wrote a post denoting a rough estimate of the amount of money frugality had saved me. I had more time than avenues of income.

But I still spent money on Christmas. In fact, I’m pretty sure that was the year I partook in a battery of medical tests to garner up enough cash to buy my then-boyfriend, now-husband tickets to a Final Fantasy Symphony.

I didn’t save any money on the tickets, but it was still frugal.

This year, I have more income streams than time. We saved up our $800 Christmas budget throughout the year so that December would be no big deal for us. While we planned on buying quality gifts for our kids and family, I watched sales. I got my kids’ Christmas PJs on Cyber Monday at Gymboree*, I waited for a Buy 1 Get 2 photo calendar sale before ordering gifts for grandmothers, and I found some super awesome toys at Target on clearance.

I saved money on my gifts, but I had to sacrifice a couple hours of my time. That’s frugal, too.

I’m not going to rehash the frugal vs. cheap debate. There’s about 10 million articles on that. But I do like Liz’s summation of what frugality is in last week’s post. It’s pretty epic, but here’s the last bit of it:

Frugality isn’t just about saving money; being truly frugal means your spending, saving, and money-making habits all intertwine to ensure your money is going as far as it possibly can.

I, for one, could not agree more. I could have spent those few hours working instead of finding deals. But, frankly, I already work enough. Spending a few more hours at it wasn’t worth paying full-price to me.

On the flip side, while I’ve done DIY in years past, this year I decided it wasn’t worth the time. Besides, some of those DIY projects can add up to be more than just going out and buying a gift.

We saved that money throughout the year. We simultaneously saved for a house and retirement. Eight hundred is not a burden to us this month, and won’t be showing up on credit card statements next.

Even in 2011, the year of ultimate frugality, my focus wasn’t solely on cutting coupons and negotiating with department store clerks. Those awesome tickets? I worked for them, even if I didn’t have a bonafide job at the time.

Work. Save. Spend wisely. They all work in conjunction to equal frugality. As with most things in life, the answer is not at either side of the spectrum, but somewhere in the middle.

A note on quality

We all have so much physical stuff in our lives that it seems like a waste to go out and buy a bunch of cheap crap that’s going to be useless in a few months. While I could have spent about half my Christmas budget if I had gone cheap, I just flat out don’t want to. I’d rather bring quality things into my life, my kids’ life, and my family’s life, and I’m darn lucky to be able to do that this year.

Here’s some things we’ve spent more on in the past, and they’ve turned out to be great investments:

The hotel brings me to my final thought: value-based spending. For us, it was worth it to pay more money to not stay in a hut. We also like to travel, so about once a year, we take a big vacation, and sprinkle smaller ones in between. If we never traveled, I’m sure we’d reach retirement sooner, but we wouldn’t have enjoyed life in between.

For us, travel is worth the money. For you, it might be an extraneous expense. I may look at your gym membership and ask if you haven’t heard of YouTube and using your own body weight in resistance training. But that would make me a jerk face, because what I don’t see is that having the membership motivates you to work out; you feel the pressure of sunk costs if you don’t go. And your health is something you value.

I like Christmas. I like giving presents to the people I love. I like figuring out something that will bring them joy this year, whether it be an experience or a physical object. Kudos to everyone who does it without buying gifts, but for us, it’s a tradition we enjoy participating in.