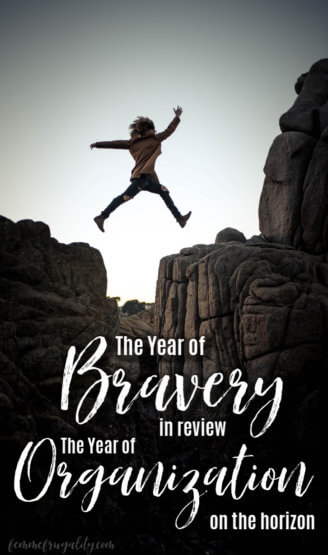 You may remember that 2018 was my year of bravery. I did things that intimidated me. Things that I had been putting off. For the most part, this panned out well. Regardless of the end results, I learned something as a result of taking each and every leap.

Year of Bravery in Summation

Most of this I’ve told you about before. I was reticent to book my trip to Japan without my kids, but it ended up being the experience of a lifetime. I’m so glad I did it.

I wrote a book, which was released on October 15. Aside from a few trolling tweets, the feedback has been overwhelmingly positive. I shouldn’t seek outside validation, but when you put a creative work into the world it’s hard. It’s like bearing your soul to the world, and then trying to get people to look at it. So when the feedback comes back positively, there’s a huge wave of relief.

I moved into my own place, which was one of the hardest things I’ve ever done. It has also opened up opportunities for great personal growth, though.

Going Back to School

Then there was going back to school. I thought I had this one down, but, boy was I wrong. First, the school I chose to attend was an hour and a half away. Which was fine (though I did start feeling terribly about it when the latest climate reports came out.) I can deduct the mileage as a self-employed person working towards further education, but spending 9 hours in a car per week was overwhelming. I made the right choice on which school to attend; I just wish it were closer. Or that I trusted and then owned a self-driving car.

While none of my classmates were anything but kind, it was completely weird being in a sea of 18- to 21-year-olds. I had to adjust to the professor/student dynamic again, which wasn’t too big of a deal. It was just something I didn’t think about. I interview academics on a pseudo-regular basis for work, and have a few friends in the field. Taking that interpersonal dynamic down to an 18-year-old level again was a move I made awkwardly at first, but I think I figured it out.

I asked too many questions. I missed too many classes thanks to kids’ illnesses and snow days. For a little while there I was ill myself.

And I had to reconcile the fact that I wasn’t going to get an A on everything. I’m a little bit of a perfectionist when it comes to my studies. But I simply didn’t have the time. Even with substantial childcare help from my family, I had to choose kids and work over school several times, which was not a decision I wanted to face. But it was the only one that was logical at this juncture of my life.

Pretty much, I overbooked myself. So I’m taking next semester off while I get a plan together to viably try it again. While I learned amazing things and wouldn’t assign the word “regret” to the past semester, I did realize I need to do less things better moving forward. Which brings me into my plans for 2019.

The Year of Organization

By nature, I’m hyper type A. I like spreadsheets. I like planning for my future 1-, 5- and 10-years out. I oddly enough enjoy the process of filing taxes–even if the end result isn’t always fun. I like making to-do lists, and get way too much joy about crossing all the items off of them.

But the past few years, I haven’t been myself. My money hasn’t been as religiously organized. My schedule has changed at the drop of a hat over and over again both because I’m self-employed and because I’m the mother of young children. So I got to a point where I built skeletons of schedules scant on details. Which led to a lot of incomplete to-do lists.

Some people can operate in this space. I’m not one of them. So this year I’m really going to try to get back on track. To legit fix my money. To get a concrete schedule down–which will undoubtedly change a few times throughout the year–so I can cross more of those items off my to-do list.

I want that sense of accomplishment back. Because this year, I learned that while bravery comes with great rewards, I am left in a state of panic after its results come in if I don’t have a plan. I am capable of handling it. But handling it is not something I enjoy.

So in 2019, I’m going to continue to be brave. It’s a value that is now integrated into my life, I hope. But I’m also going to get organized so I can enjoy the fruits of my efforts a bit more. I’ve already got a weekly schedule down. My paperwork is almost to a point where I’m ready to file taxes. And I’ve scheduled money dates with myself for both my personal life and my business.

While this is a great time for new goals and new beginnings, remember to not wait until the new year to address any aspect of your life you’re not happy with. Start as soon as the thought or motivation comes to mind.

Do you have a word for 2019? What goals/resolutions are you currently working on?