I’ve learned that if I plan activities to do with my children, the day goes a lot smoother than if I just expect magic fun to happen.  Spontaneity is always a force to embrace when dealing with kids, but I’ve learned there is a difference between going with the flow and just flowing, which usually ends with me begging for the thousandth time to, “Get your feet back on the floor!” and asking myself why they haven’t found something better to do.

And it was because I wasn’t providing it.  So this Christmas season, I tried to have at least one thing planned everyday. 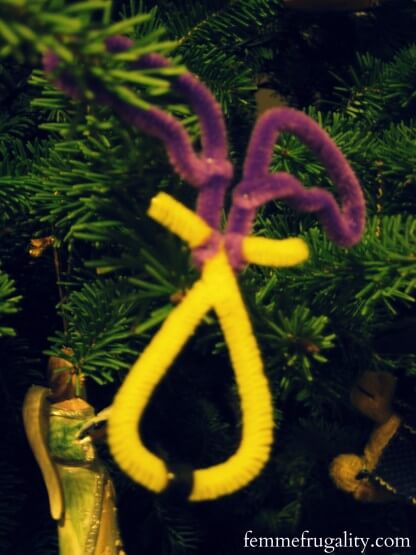 These reindeer ornaments were definitely a win.  They had a ton of fun picking their own colors for the pipe cleaners and deciding if their reindeer would be Rudolph (red bead) or Donner (black bead.)  It was as simple as twisting the pipe cleaners to look like, well, a reindeer.

Another win:  Christmas decorating.  We got the tree and put up all of our decorations on the same day.  They were running around looking at everything, giggling all the way.

We also made ornaments for our wall decal tree.  Paper, glue, and glitter.  So. Much. Glitter.  But they had so much fun, and couldn’t stop looking at their work when I hung it on the wall.  (You can take a peek here.)

The final win was one of those spontaneous ones.  We took a family member shopping, and had a little time to spare while they were looking around.  So we went to the Christmas section at Wal Mart.  Do you have any idea how cool an entire section of blow-up lawn decorations is when you’re 3 feet tall?  I didn’t until I saw the smiles and claps.

There were oh, so many partial wins.  There was a Mommy/Child date to go see a movie in the theater the first time.  The good news:  the little one loved it.  The bad news:  while I love seeing my kids happy, I realized that I might have jumped the gun on the whole movie theater thing.  All kinds of candy ended up on the floor,  the kids in front of us were not so gracious about their seat getting kicked every 5 minutes (don’t blame them,) we had to step out for half an hour to literally run up and down the halls to get some of the excitement out, and I think I said, “Shhhh,” 50 million times.  So I was exhausted.  But the kiddo had a great time.  And that was the whole point.

Then there was the Christmas movie at home.  Only one of them even cared about the movie, but they were soooo into it.  It was one of my childhood favorites, so I tried to revel in the joy and just ignore the fact that another one was finding unravelling a roll of toilet paper much more amusing than enjoying a classic with mommy.

Finally, the gingerbread cookies.  Oh, the gingerbread cookies!  I got the dough made and tried to get them to watch or participate or anything while I was using the cookie cutters to make little men.  When they came out of the oven, I thought the decorating process would be a lot more interesting.  But it turns out all they cared about were the M&Ms.  So I decorated a bunch of cookies while my gingerbread-averse children got a sugar high.  But they had fun, right? 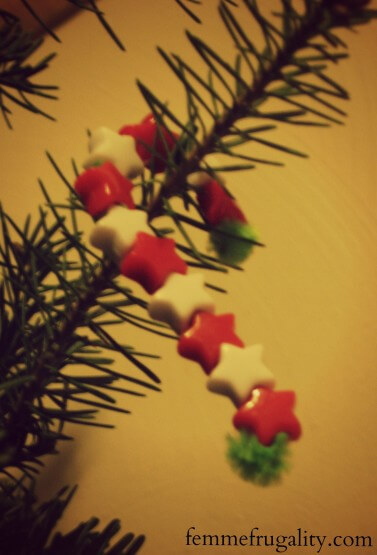 I wouldn’t blame you if you thought the candy cane was made by a toddler.  That was the plan.  But it didn’t work out that way.  Usually beads are a big hit around here, but that night, they just weren’t.  It was a particularly low-mothering-self-esteem day, so I sat there stringing beads onto pipe cleaners myself, sulking about my parenting skills because the kids didn’t want to make a candy cane with me.  It obviously meant I was a bad mother.

I was over it by bedtime.

Then there was the snowglobe ordeal.  I saw it on Pinterest.  Put packaging tape around a picture of your kids.  Put it inside a baby jar.  Spray paint the baby jar lid.  Add water and glitter.  Screw the cap on with glue around the rim. I have a stash of empty baby jars, but I didn’t have the spray paint or the water-proof glue.  So I went out and bought them.  We made enough to give them out to our family as Christmas presents.  Do you know how hard it is to screw a lid back on a baby jar after it’s been opened?  Let me save you some grief:  it’s impossible.  I tried anyways.  The end result was leaky snow globes with so much glitter in them that you couldn’t even see the pictures, which were bleeding anyways because water was seeping through the edges of the packaging tape.

Some of my losses and partial wins were frugal.  Some of them weren’t.  But all of my wins cost us nothing (we had all the materials at home.)  The main moral of the story is have fun with your family, and when there’s kids involved, know things might not always go as planned.  But that doesn’t mean you should stop trying.  Because those wins are so worth it.

Merry Christmas Eve!  Get to bed early so Santa can come. 🙂

7 thoughts on “My Christmas Parenting Wins (And Losses)”