This post is in partnership with the Pittsburgh Cultural Trust. 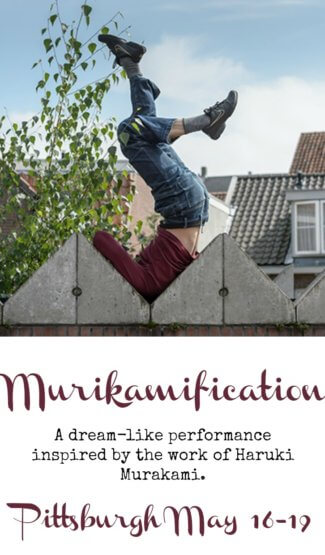 It is with bittersweet excitement that I announce the final Pittsburgh Cultural Trust giveaway for the season! This show is way unique, is part of the Children’s Festival and is something you’re totally not going to want to miss.

This show is named after the famed Japanese author Huraki Murakami (hence Murikamification.) As his novels are completely unique experiences, so is this show.

Step into the daydream that unfolds before your eyes. Using the magical, surrealistic stories of Haruki Murakami as a source of inspiration, Kaiel creates an intensely physical and absurd performance trail. In each new city, the work is adapted to the local context. In each version of ‘Murikamification’, a diverse and curious audience is overwhelmed by surprising scenery in the streets of their own city. Follow the action on this moving theater piece throughout Pittsburgh’s own Cultural District.

Content Information: Best for ages 7+. This show is non-traditional and takes place throughout the Cultural Distict. Audiences will be provided with a meeting point prior to the show day and time. Artists will lead the audience on a theatrical adventure filled with comedy, acting, improv, acrobatics, dance, physical theater and music. Performances occur rain or shine. No late seating.

The show will be up and running during the Children’s Festival at the following dates/times:

To celebrate this last show of the season, Femme Frugality has partnered with Pittsburgh Cultural Trust to bring you four (4) free tickets to a showing of your choice! Use the widget below to enter.

Best of luck, and don’t forget that we have a giveaway going on for Emily Brown and the Thing, too! Enter before both close at 11:59p on May 6th, 2019!