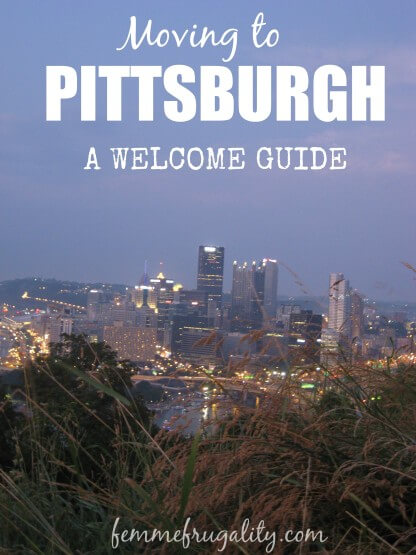 It’s moving season, and with how much I’ve been writing about saving to buy our own home, I thought I’d put together a little something along the lines of a Pittsburgh Welcome Guide for those that are relocating to the Pittsburgh area from a native’s perspective.  I’ve lived in the suburbs and the city.  I’ve lived in other parts of the country and moved away for a while.  But this city keeps me coming back, and at this point in my life has convinced me to stay.  When you’re new in a place, figuring everything out can be overwhelming.  Here are some of my top tips for all the new Pittsburghers out there!

Pittsburgh is a great city, but it’s an old city.  While some people consider us mid-western culturally (I sure don’t, but we’re not exactly North Eastern either,) our road system is more akin to those of North Eastern cities.  They just kind of happened.  They appear to have no master plan.  You won’t find a grid system or too many true, square blocks.

Generally in these situations you’d pull out the good old GPS, right?  Don’t.  At least not if you’re driving in the city itself.  Do it the old-fashioned way and ask someone for directions.  The first reason for this is that we have A TON of city steps.  For a long time (and for some, this still holds true,) they were vitally important to getting around.  So important, that they got labelled with street names.  Which is all fine and good until your GPS tells you to turn down one of them.  Which it will.

Another reason is that sometimes it just can’t keep up.  I can’t tell you how many times I’ve missed the 7th Avenue Exit when I’m heading north on 579.  It’s not even labelled 7th Avenue.  It’s labelled Consol Center/ Centre Ave.  But my GPS calls it 7th Avenue, and only tells me to turn there about three seconds after I’ve passed it.  My recent dependence on GPS has caused my commutes to be longer because of errors like these, and I actually know the general area that I’m heading since I’ve been here a while.  So as a newcomer, I’d turn it off and ask for directions.

I drive around a lot for work.  I live in the city, and commute to suburbs in every which direction.  If you’re suburb-bound and still trying to figure out which one is the best match, let me just say that the commute to the northern suburbs (generally referred to as the North Hills, not necessarily referring to the one school district up there by the same name) is far and away the best.  Not only is it not as jam-packed as the other highways, but it’s the only highway that has an HOV (high-occupancy vehicle) lane.  Yes, there’s still traffic.  But no, it’s not nearly as bad as heading any other direction out of downtown.

General Freeness You Should Know About

Pittsburgh has a lot of cool things to do that are totally free.  I blog about them a good bit, so you can follow along or search the archives if you’re looking for more detailed, time sensitive stuff.  But these are the two biggest day-to-day things you should know if you’re settling in.

Number one is that city parking is free on Sunday.  I try to do my shopping on these days because of it.  It also makes it a great day to go out and visit different museums, sites, and other attractions.

Number two is regarding our museum system.  If you are a student, you can get free or reduced admission to almost any museum in the area (and we have a lot of them.)  If you or someone in your household is disabled, it’s worth getting an Access card.  (They’re issued by the state if you get any benefits, and are also available to those receiving other kinds of welfare.)  Access cards give you reduced admission (generally $1-$3 total per person) to a number of museums like the Carnegie Art & Natural History, Carnegie Science Center, Children’s Museum, and The Andy Warhol Museum.  (Note on that last one: the 7th floor is not a good idea if you’re bringing children.)

There are some things you should know if you want to acclimate to the culture here.  They’re general tendencies that you may adopt yourself, but you’ll definitely notice other people have them.

I definitely didn’t cover everything, but that’s a good place to start.  So if you have any questions, please leave them in the comments!   Welcome to Pittsburgh, and I hope it treats you as well as it has treated me!