It’s been a while since I shared the husband’s ideas for my blog.  In fact, last time he was still my fiance.  He was supposed to help me write a post this summer on the financial and gaming benefits purchasing a PS3 over a PS4.  But then when I asked him about it, I got shut down:

“It’s not MY job to write articles for YOUR blog.  I have enough writing to do during the school year.  It’s summer.  I have Final Fantasy to play.”

And I don’t blame him.  He pretty much went a year without playing video games during his first year at college.  So if that’s what he wants to do after the kids are asleep, more power to him.

I don’t have game system bargain tips to share, but I do have some other ideas he’s thrown at me over the past several months.  If you’ve never read one of these posts before, his ideas are usually not advisable to follow in real life.  Some are creative, but most he comes up with just to make me laugh.

We were discussing the Californian economy, and how although prices are higher, people generally make more money, somewhat equaling it out.  (Somewhat.  Pittsburgh is still one of the most affordable cities in the country taking into account local economy.)

So his grand idea is this:  grow up in California.  Live in your parents’ basement for years, even after getting a “real job.”  Then, move almost anywhere else in the country.  Now you’re rich.

Please feel free to point out the numerous holes in this plan. 🙂

For my birthday, all I really wanted was a purse-size bottle of Philosophy lotion.  One of the fun scents, not purfumey.  Didn’t think to look on Amazon, so we scoured TJ Maxx, Ulta and Sephora.  I came up empty handed, but that didn’t stop him from balking at the prices.  I have a huge thing of plain old moisturizing lotion from the grocery store that I use for my face.  So he called me out.

“You say you’re frugal.  And you want to be green so bad.  So why don’t you just wash out your old bottle and fill it with the grocery store stuff.  You’ll be saving the planet and money.”

Because it was my birthday, dammit.

3.  Recycling really is making a difference. 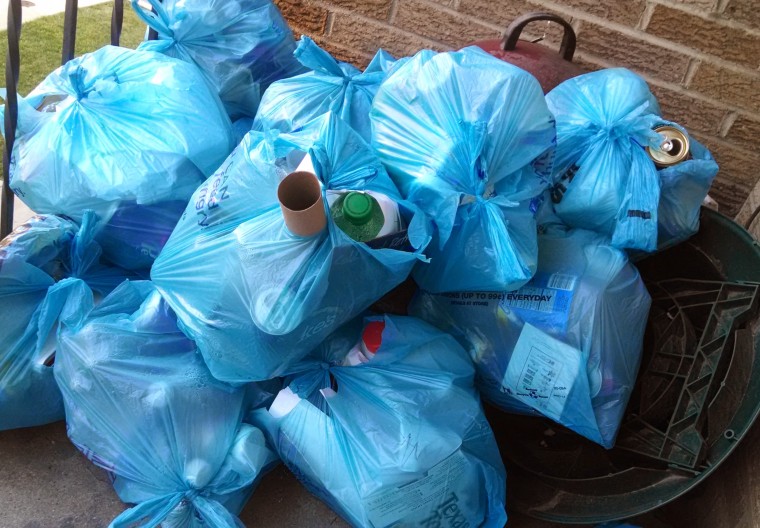 Our most recent haul.

We started recycling a few months ago.  A couple of weeks ago, the night after we took a huge pile of blue bags to the curb, he looked at me and said, “You know what?  That was a lot of recycling.  It really does make a difference.  We used to just throw all that away and send it to the dump.  Imagine if everyone on our street did that.  It would be insane.”  We can see probably about 25 other residences from our home.  Only 2 others regularly put out recycling.  He has a point.

Then he told me I should blog about that.  So here we are.

4.  Invest in Something You Can Touch.

He’s got a bunch of opinions about the Fed and how they manipulate our money.  For that reason, he doesn’t trust the stock market.  He recognizes that a 401k or IRA is one of the best ways to save for retirement, in all seriousness.

But being serious would be no fun.  His advice?  Invest in physical items.  No, not real estate.  Things like statues.  And art.  And guitars.  The only logical explanation I was able to get out of him was the guitars.  He said you could buy one for $600, get someone famous to sign it, and then sell it for a lot more with a great ROI.

I have no idea how you’re supposed to flip a statue.

5. Become a sugar baby…in so many words.

And the crowning piece of financial advice from my husband: “If you want to get rich, here’s what you’ve got to do.  Get in with some rich people.  Get them to like you.  And be beautiful.”

That’s the Reader’s Digest, and clean, version of this one.  I won’t go into the conversation that ensued.  Let’s just say it was a bitter rant on his part, and that even he couldn’t keep up the farce of believing what he was saying.

These posts are fun.  But I don’t want to represent my husband as a financial idiot.  He’s one of the most hard-working and responsible people I’ve ever known.  He’s smart, and manages his money in accordance with that trait.  Those are some of the reasons I’ve fallen for him, but the other is that he makes me laugh.  So when I’m stressing out, trying to brainstorm content ideas, he throws things like this at me.  To help me realize that sometimes, it’s okay to just laugh.

Plus I’m pretty sure he’ll eventually buy me that Philosophy lotion.

*Linked up to Thrifty Tip Thursday, The Friday Five, and Friday Jet Fuel*