This post is brought to you and contributed by Susan Ranford. 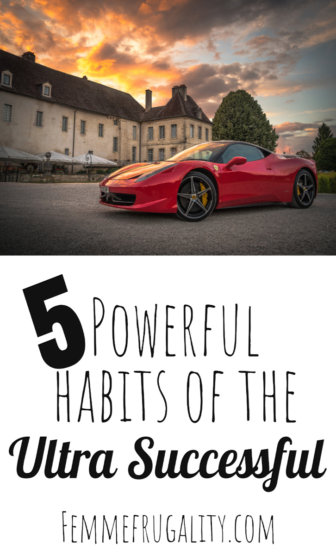 There is a recent Harvard study that says that millionaires who made their own fortune (weren’t born or married into it) are happier than those who inherited their millions. The study went on to say that the happiest kind of millionaires are the ones that end up giving their fortunes away to charity.

As a struggling “thousandaire” trying to make it into the millionaire status, giving all your money away seems rather counterintuitive. Although that might be your viewpoint right now, things might very well change once you make that first million…ten million and so on. They say the first one is the hardest to make. Supposedly they just come pouring in once you have gotten over that first $1 million hurdle.

To help you get to that first million faster, here are some habits that will make you a millionaire.

Habits that Will Help Make You a Millionaire

Turns out, all millionaires have a few things in common. These include:

You probably already know this; if you are not passionate about something, you won’t give it as much effort and time as you would to that which you love. Well, turns out millionaires have extreme levels of passion for the things that they do.

Of course, there are those who invest in things they think are wonderful business ideas and opportunities without necessarily being dedicated to and passionate about those things. What you need to remember is that these kinds of venture-capitalists are passionate about finding the right, undiscovered opportunities in which to stake their money.

No one ever made it big by just lying around without ambitions. Take Oprah for example: when she first tried getting into television, her producer told her she wouldn’t make it because she was too emotional.  But instead of giving up, she was determined and built a brand off of her feelings–those things that connect to humanity’s core. Now she’s Oprah.

Bottom-line, you need to have massive dreams and impossible ambitions if you want to get anywhere in this life.

You have to be constantly working at improving yourself. We are talking about all facets of your life. Whether it be:

It is through the little things that you build an empire. If you are determined to build wealth through investing, then you should be doing something to improve your investing skill set every single day. It is just that simple. You become an expert at what you repeatedly do with a purpose.

Mark Twain said, “If you always do what you’ve always done, you’ll always get what you’ve always gotten.” The idea is to develop excellent habits but with daily increments. If you have been doing things that earn you $100 a day, then your goal and ambition should be to increase on those things and start doing that which will earn you $150 a day. Then go to $200 and so on.

The underlying habit will remain intact (you will always be setting daily goals). The only difference is that the goals set will increase in quality and output.

5. Embrace and Learn from Mistakes

Most people are afraid to fail at something and as a result, never really get to try anything worthwhile. This is something that most millionaires have in common; they aren’t afraid to take calculated risks. They accept the fact that sometimes things might not go the way they plan them to at all.

In many cases, the likelihood of failure is much higher than that of success. They do not let this knowledge paralyze them or make them timid about trying out new money-making ventures. Instead, they embrace the fact that no matter how well thought out a plan can be, there is still a very good chance that it will fail at some point. The idea is to not let that notion stop you from trying but to embrace that fact and learn from those failures so you can better your chances of succeeding in the future.

In the entrepreneurial world, no one goes from zero to hero in one fell swoop. These things take time and there is a process. You have to:

Most of all, you have to know that lady luck tends to smile most often on those who are prepared to take advantage of the opportunities she presents. After all, they do say that fortune favors the brave.

Simply sitting back and hoping to win the lottery might work for some people, but it does not work for the vast majority of humanity. The odds are just too slim. The best thing to do is come up with a tangible and plausible plan on how you are going to make your money and then get to work immediately. It is never too late to start.