Today we are joined by Andi Tremonte of The Utah Domestic Violence Coalition. Andi is the rural LGBTQ+ cultural competency trainer for the organization. He trains domestic violence shelters, police stations and other organizations that serve survivors of sexual assault and domestic violence on how to effectively advocate for survivors from the LGBTQ+ community and other under-served populations.

To support UDVC’s mission, you can make a tax-deductible donation here. 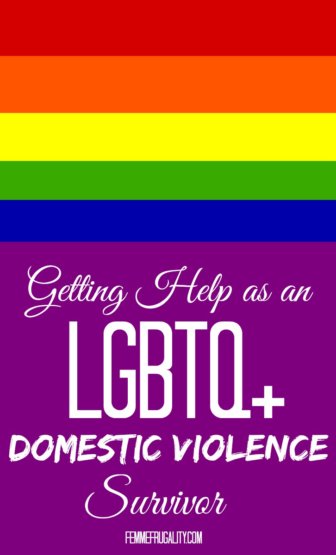 Domestic Violence in the LGBTQ+ Community and Self-Reporting

Rates of occurrence of domestic violence are the same across heteronormative and LGBTQ populations.

Traditionally, “domestic violence” has referred to a woman that has been battered by a man, but through research we see reported rates of abuse being comparable in each population.

In my experience, I have seen far less survivors of intimate partner violence (AKA domestic violence) who openly identify as LGBTQ+ when seeking services. This is where we see the many barriers that the LGBTQ+ community faces when seeking even basic services.

The number of survivors who seek services will differ from the number of survivors who self-report intimate partner violence in surveys. Think for a moment about the barriers to each of these information sources. On one hand, we have a survey that may be administered at a known LGBTQ+ resource center, so the participants will mostly fall on the LGBTQ+ spectrum. However, in many domestic violence shelters this identifying information may not be collected or the survivor may not disclose their sexual orientation or gender identity.

Your Rights as an LGBTQ+ Survivor

VAWA 2013 (Violence Against Women Act revision of 2013) included protections for Gender Identity, Sexual Orientation, and Gender Expression. What this means is that all services are available for any survivor, regardless of sexual orientation or gender identity.

This is a wonderful tool that is used to help create more options for seeking and receiving services.

Second, when safely planning for LGBTQ+ folks, isolation is a big issue. Instead of forcing a survivor to avoid the LGBTQ+ community, there would need to be planning around rebuilding a support system from that community and the possibilities of interacting with the abuser.

Bathroom and housing issues seem to rise when a trans survivor comes into shelter, but VAWA has guidelines for this. It is important to let a trans survivor choose where they stay. A trans woman should be allowed to be in women’s housing and the support group of their choosing.

We need to remember that it is not acceptable in any way to ask a trans survivor about their genitals, trans related surgeries or if they are on certain hormones. This is not information that is needed to serve that survivor. Gender identity should not be an issue or discussed with any other survivor. VAWA has specific privacy requirements related to any identifying information or combination of information.

Historically we have seen domestic violence as a very heteronormative crime. We see this reflected in the names of organizations that service survivors of intimate partner violence.

Shelter names like “Women’s Crisis Center” can be very off putting for male and trans survivors. Transgender survivors have their identity constantly questioned and when seeking services. If there is no attempt to be inclusive, trauma informed and culturally competent then that survivor is less likely to continue to seek services. One of the main barriers is being outed.

For a trans person, being outed can be the difference between life and death.

There are many barriers that male survivors face. We live in a society where masculinity hinders men’s ability to express emotions in a healthy way, admit they were victimized and seek help when needed. We have this pressure for men to be strong, masculine, always ready for sex, aggressive and violent. This can make seeking services very difficult.

Masculinity is fragile and needs to be constantly proven, making reporting for men that much more difficult.

Understanding unique abuse tactics that are used against LGBTQ+ survivors is extremely important. Specific abuse tactics  can include, but are not limited to:

Looking at this small list of abuse tactics may seem like there are not many differences between the experiences between LGBTQ+ survivors and other survivors, however, the big piece of this is that these tactics are aimed at the person’s LGBTQ+ identity.

Often, we see a person’s identity being blamed for their abuse, especially when they seek services or help. Someone’s gender identity or sexual orientation is never a reason why someone deserves to be abused.

No one ever deserves to be abused.

This is a way to victim blame LGBTQ+ survivors. They caused their own abuse by choosing to be LGBTQ+.

Notice how many of these tactics are dehumanizing. They strip the survivor of their identity and humanity, they are reduced to objects.

On Being Outed: Non-Discrimination Acts are Important for Everyone

When someone is outed, meaning, their gender identity or sexual orientation is disclosed intentionally or unintentionally, it can lead to disastrous consequences. In places without Non-Discrimination Acts (NDA,) LGBTQ+ folks can lose their job or their housing based on a LGBTQ+ identity.

This is on top of the other losses that an LGBTQ+ person can face if outed, like loss of community, family, friends, support systems and religious affiliations, to name a few.

This highlights the importance of NDA for everyone, not just LGBTQ+ folks. Without NDA, people can lose their job or housing based on the perception of an LGBTQ+ identity. That means regardless if you do or do not have and LGBTQ+ identity, you can face discrimination if you are thought to have an LGBTQ+ identity.

NDA can help to lower barriers for survivors and help them heal after abuse.

LGBTQ+ Relationships are Not Based on Abuse

LGBTQ+ relationships are not based on abuse. LGBTQ relationships have similar dynamics to heterosexual relationships. The biggest difference would be the lack of traditional gender roles, which allows more freedom within the relationship. People choose their roles, rather than having them chosen for them because of gender.

Go to a domestic violence center/shelter and meet with an advocate. They can help you with protective orders, safety planning and offer other services that can greatly increase your safety.

Remember that the most dangerous time for a survivor is when they are about to leave and right after they leave their abuser. A significantly higher amount of people are killed by their abusive partner after they have left the situation.

Please, get the support of your local domestic violence service. Call the national line or a local hotline. The best thing you can do is have support.

Additionally, get a hold of your local LGBTQ+ resource center and see what support they can give for survivors. Local and state coalitions for sexual assault and domestic violence prevention are a great tool, as well!

Thank you so much to Andi for sharing his expertise with us today! If you are seeking out resources for LGBTQ+ survivors and don’t know where to start, here are some at the national level:

While the following resources certainly don’t cover everything available across the entire country, they are good local resources for specific regions:

Andi has also been kind enough to provide us with the following brochures to further assist readers:

Leave a Reply to The Thrifty Issue Cancel reply