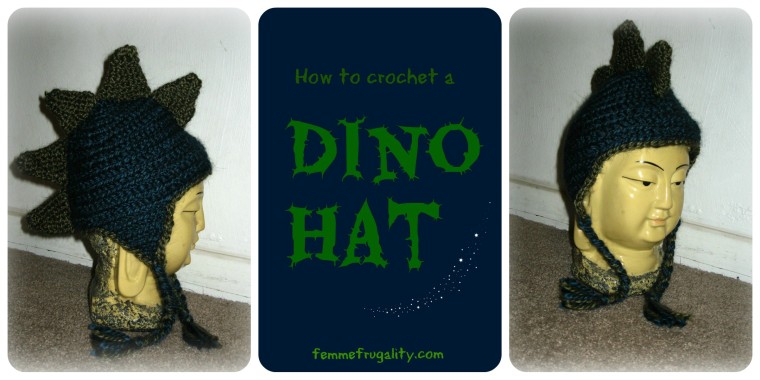 Technology is so wonderful.  My friend has a little boy that I’ve been dying to make this hat for since I saw the pattern on Pinterest.

The pattern is only $5, and I thought that sounded pretty cheap for a hat.  Until I bought the yarn.  My fiance kept saying we should just buy a hat because the crocheted one wouldn’t be warm at all.  (His point was all those little holes.)  So I bought alpaca yarn.  Because that’s crazy warm, right?  But it was $5 a skein.  And I had two colors.  So I was at $10 plus about $3 for some needles.  I hadn’t crocheted in years, and I only knew one stitch.

So I was looking at $13 for a hat, now.  The fiance was becoming right; if I bought the pattern, too, this was going to be an expensive project.  So instead I tried to find a pattern.  While I couldn’t find a dino hat, I did find a pattern for dinosaur spikes.  And a pattern for an infant ear flap hat.  I put them together and that’s how I got the cap you see on the manikin head.

There was a small learning curve involved here.  Like I said before, I only knew one stitch, and that was the double crochet.  I only found out that was the stitch I knew after google-ing what the heck all the code inside the crochet patterns meant.  So I knew that stitch, but I still had to figure out how to do a magic loop and a single stitch if I was going to do this.  The magic loop is the hardest part, but once I discovered I could use YouTube videos to teach me the process sped up incredibly quickly.

Here’s the pattern for the earflap hat.  I actually had to add an extra row.  I think it was because I had my stitches really tight.  I didn’t want the fiance to be right about those holes.

Here’s all the YouTube video’s you’ll need if you want to try this yourself and you’re a newb like me:

Magic Ring/Loop/Circle (The good part starts around 1:20.  Like this guy because he slows it down after he shows it to you in real time.)

That should be all you need!  And then you’ll need to make dino spikes.  Which doesn’t use any new stitches.  You might think it looks like a mini hat when you start, but by the time you finish, when you fold them in half they’re triangles and you can just sew them on.  I got the dino spike pattern here.

Once you learn the stitches, it’s super easy.

So all this YouTubing got me thinking; what other skills can you learn for free just by watching YouTube tutorials?  As a consumer, it’s pretty awesome.  But I wonder if there are some tutors or teachers of any number of subjects out there that hate that the option is around.  Because now that I know to do it, I don’t know why I’d pay someone to teach me.  At least not with something hands-on like this.

Have you ever taught yourself something with a YouTube tutorial?  Are there any new skills you’ve been dying to learn that you may look up?

13 thoughts on “Learning a New Skill For Free on YouTube: Dinosaur Hats!”