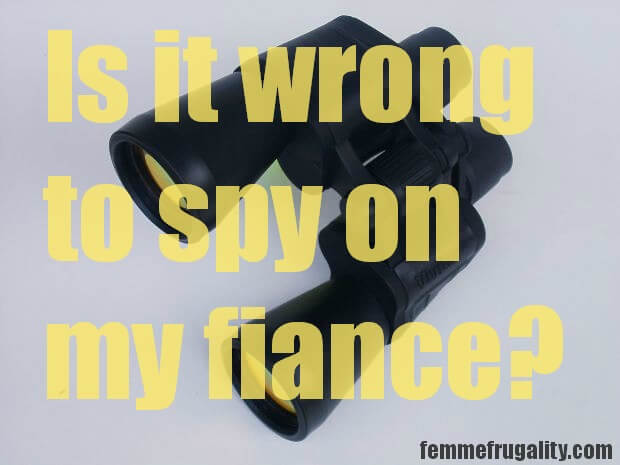 It was an accident.  Really, it was.

It was about two weeks before our wedding.  The kids by some miracle were actually sleeping, all at the same time.  My phone rang.  It was my fiance.  He was at work.  I picked it up with a musical, “Hi, baby!” (Because that’s how I sound in my head: musical.)

I could hear him talking to someone as his phone swished around.  I had been pocket-dialed.

And I almost hung up.

But I didn’t.  Someone just asked him if he was nervous about the wedding.  And I couldn’t force myself to hang up.

“No, not really.  I love her.  We’ve been together for xxxxx years, so it’s not like anything’s really changing.  I mean, we don’t have joint bank accounts or anything yet, but pretty much everything’s the same.”

Interesting.  For those of you who are new, I’m not very into joint bank accounts.  I prefer my money separate, and he seemed okay with that.  I stayed on the line.  Because I had to know what else he would say when I wasn’t listening.

But it turned out okay.  It turned out great, actually.  People were asking him a succession of questions, all of which had answers that were congruent with what we’ve talked about together.  We want to buy a house, and this next tax return will be awesome to help us save up for that in addition to what we’re already trying to stash away.  Of course, he also outlined everything we’ve spent our past tax return money on, which was a little more than I’d normally share.  He outlined my jobs options and prospects…including salaries.  And he said he wanted to find an entry-level position somewhere in his field before he graduated so he could have benefits and have experience under his belt before graduation.  Again with the expected salary.

Then he started walking and things got all swishy again.  So I finally hung up.

Overall I was really glad I spied.  How many people get the chance to know that you’re really, truly on the same page in such a candid way two weeks before you say, “I do?”  The only thing I found a little surprising was how open he was about our money.

I confessed my espionage when he got home. We talked about the joint bank account.  He said he knew my stance on it.  He also said that it wouldn’t make sense for us with the ways we get paid and how much sense each of the services our respective banks offer us; combining would just make things 20 times more complicated.  Which wasn’t something I had thought about, but is true.  He said the reason he even brought it up was that most people just think that’s “what you do” when you get married.

I’d be lying if I said I wasn’t nervous about what he was going to say when he didn’t know I was listening.  But I was super happy about everything I heard.  Especially that, “I love her,” part.