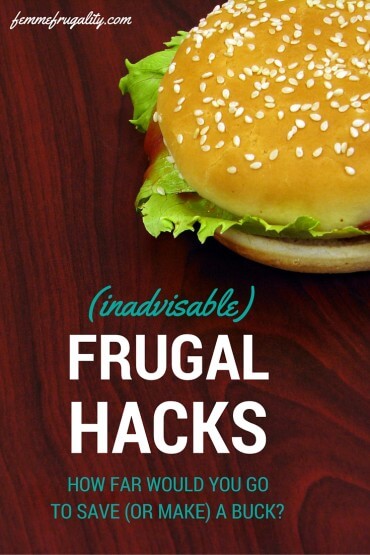 It’s been a while since the husband has shared some of his ludicrous frugal hacks with you all.  (Or at least a while since I’ve written about any of them.)  You may remember his ideas for a frugal girls’ night out, his suggestion to start busking as a side hustle, or to live in your parents’ Californian basement in order to save up for real estate in any other part of the country.

His ideas, my friends, are not meant to be taken seriously.  But here they are nonetheless:

If you’re hurting for cash, or are just cheap as all get out, score some free food using his McDonald’s tip.  To make this work, you go inside, order one of those 99 cent ice teas, and sit at a table facing the trash can.  Pull out  your phone to make it look like you’re not being creepy, but secretly keep an  eye on people, and how much of their food they’re actually eating.  If you see someone heading to the trash with some uneaten food, quickly and slickly sweep in before they can make it to the garbage receptacle.

“Are you going to eat that?”

Milk that iced tea until you’ve eaten enough scraps to have a full meal.

Probably easier to just order off the dollar menu.  But not as much fun.

2.  Borrow Small Amounts of Money.  From Everybody.

Need to get your hands on a couple hundred dollars quick?  It’s not as hard as you might think.  This idea requires borrowing inconsequential amounts of cash that no one will miss.  Say $5.  You’re not likely to lose a friendship or damage any other type of relationship over $5.

Now borrow $5 from everyone you know.  Seriously everyone.  After you’ve successfully borrowed from 40 people, you have $200.  Never pay them back.

If you know they’ve got a little more, and their threshold for losing money is higher, you could up the ante to $20.  They key is it has to be an inconsequential amount of money to the person you’re borrowing from.

I’m going to say this again.  This is humor.  And it would be bad taste to follow through with any of these.

Have you ever seen a fountain full of coins?  Those are people’s wishes…their dreams.  But that doesn’t mean the money loses its face value.  Head to the fountain, take off your socks and shoes, roll up your jeans, and get to fishing.  You all know we roll coins in our house, and this could be a great way to get those rolls filled up all that much faster.  Just watch out for the mall cops.

I’m also supposed to include this video:

Happy Monday, everyone.  Don’t take yourself too seriously.