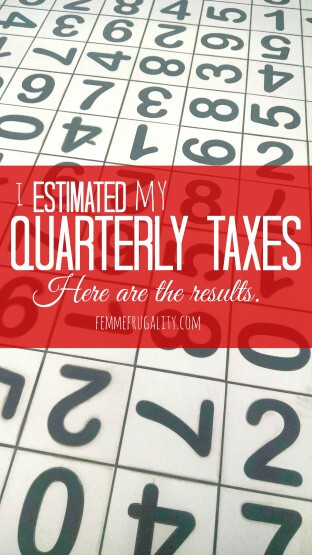 Last year I started paying estimated quarterly taxes for the first time. I laid it all out, and decided that I’d pay even though the IRS’s worksheet said I didn’t have to.

I was a little nervous about what was going to happen this Spring. Would I owe a ton of money? Would I get a ton of money back? All of my figures were based on guess work since our income is so variable. Anything could happen. I think I might look into using a W-4 estimator this year, just to get a more accurate idea of what I’m working with.

As I was figuring out my estimated quarterly taxes for this year, I went back to my paperwork from last year to see how I had figured everything out. It turns out, my shot-in-the dark assumption for income was only $1,000 off….not bad! I used the same process to predict this year’s income; we’ll see how things pan out for 2016 tax season.

When I filed this year, I got a decent size check back from the Federal government. This was after paying for taking too much of a subsidy with our health insurance. (I should probably do my IRS income predictions earlier in the year so I can use it for my marketplace application, where I always seem to underestimate our income.)

That was a nice surprise, though if I had not been making those quarterly payments, we would have owed.

State was the worst. I used the same number to figure out my state taxes, but did take into account the taxes withheld from my employer for my day job…which dried up suddenly last Fall. So I owed over $100.

My local taxes had the best formula to help you figure out how much you’d owe. They have you do the exact math quarterly. Best. System. Ever.

I’m getting a negligible refund from them. I was extremely close to having paid exactly the right amount.

This year I used the same formula to figure out how much we might make in 2016, adjusted my formula for our state tax burden and wrote some pretty massive checks. That’s the thing about increasing your income, especially when you’re a freelancer: those tax checks get painful to pay.

I’m choosing to think about all the good things that my taxes might be paying for to get over the psychological gut punch. Though it would be pretty cool if we could only pay for the portion of the budget we supported like Maggie Gyllenhaal tried to do in Stranger than Fiction.

15 thoughts on “I estimated quarterly taxes. Here’s what happened.”