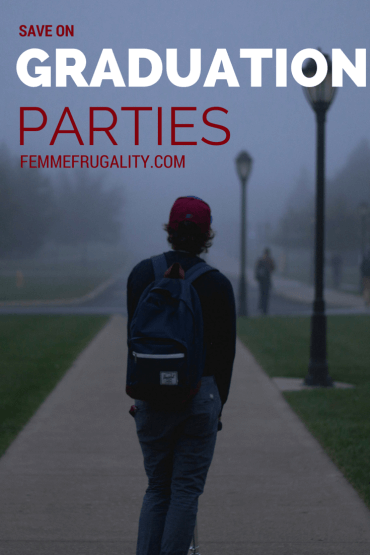 The other day I saw a small child with something on the back of their t-shirt.  The child wasn’t really all that small, I suppose, but they seemed that way to me.  It’s June.  School is about to let out.  And on the back of that shirt was printed, “Class of ’23.”

That’s what went through my head.  I remember wearing similar t-shirts with a number in the early to mid two thousands on the back.  I’m just getting to an age where I’m realizing how long ago that was, and how far removed I am from the generation that is now being raised.  The generation that I am helping raise.  Could I be one of the parents at this child’s graduation party in less than ten years?

It’s likely.  Maybe not with this specific child.  But for one like them.

It took me on a trip down memory lane.  The first graduation party I remember attending was when one of my parents earned their graduate degree.  It was in our backyard.  There was a cake.  We lived in a college town, and all of the other attendees were also graduate students, or their children.

It was a celebration.  But it was also a goodbye.

There were no cards with money in them.  There were no lavish gifts.  There were congratulations, talks of job offers, and fears of moving to new elementary schools as we left all of our friends.

When I graduated high school, I didn’t have a graduation party.  None of our family really lived close, and I’d be seeing all of my friends at theirs.  I was really excited to go to theirs.  I wanted to say those same fond farewells.  I wanted to camp out in backyards.  I wanted to talk about our big dreams and not imagine that any of them would ever be crushed.  (Who would have thought so, prior to 2008?)

I did get to do all of those things.  For two nights.  Then I got a major sinus infection that knocked me on my back for two weeks.  I was pretty bummed out, but my budget did all right because of it.  I knew it was tradition to give the grad money at their party, so I had been shelling out cash to friends.  Not a ton by my adult standards, but as a teen it was a meaningful amount.  I’m still not entirely sure it’s customary for the friends, who are also teens, to give money.  It’s probably not.  I’m still clueless.

But back to this kid who is graduating in a mere 8 years, despite the fact that they are still only a child.  Now I am an adult.  What would I give them?  When my own kid graduates, or family members start coming of age, will I be overwhelmed with these celebrations?  And if I am, how will I save on graduation parties?

I’ve been putting way too much thought into something that’s a decade-ish away.  But here’s what I’ll hypothetically do.

I figure the four main categories that are important to high school grads are books, transport, food and clothes.  (While I had learned to buy them through the thrift store or resale by age 17, I was still a juvenile obsessed with brand names.)

Books– The point here is to save money, so just giving cash for books kind of defeats the purpose.  Buying a gift card to their bookstore is equally asinine, especially since my gift would lose value due to inflated prices.  Instead, I might ask the parents for a list of what they need for the first semester.  Then I’d hit up Amazon and half.com (or whatever’s en vogue then; things change in a decade,) and then buy them whatever they needed.  I’m kind of a ninja at getting cheap books.  Just ask the husband.

I could also go the route of buying some awesome non-fiction, too.  Motivational.  Scholarship-oriented.  Successfully-completing-college oriented. Or, you know, how to manage your finances.

Transport– A lot of universities around Pittsburgh give students free access to city buses.  Which is nice.  But not all schools do.  I’d look into hooking them up with public transport if they weren’t staying in the Burgh.

Or, if they were going far enough away, maybe I could gift them some miles for a trip home for Thanksgiving.  Free to me.  Awesome for them.

Food– While I don’t want to encourage eating out a ton, most dorm rooms don’t have functional kitchens.  So I’d hit up Groupon or restaurants.com or, again, whatever’s en vogue in the 20s for group deals meets cuisine.

Clothes– I don’t know if I’d be tacky enough to give someone a thrifted American Eagle sweater and call it a gift.  You never know, though.  I am the person who once wrapped a three year old’s birthday present in a Victoria’s Secret bag.

Instead I’d probably buy them a discount gift card to one of their favorite stores, saving me money without sacrificing new-ness for the recipient.

How have you/do you/will you save on graduation parties?

3 thoughts on “How I Save On Graduation Parties”