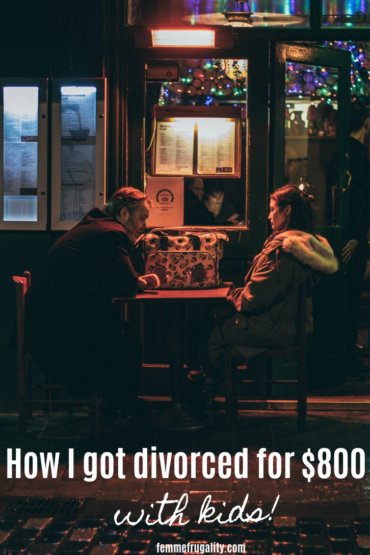 This is the one where I confirm what you suspected last summer.

The marriage to the man I’ve been in a committed relationship with since before I started writing is over.

Don’t send me condolences! This is really a positive thing in my life. It’s a change that needed to happen for way too long. It’s a process I dragged out over the course of many years in the name of trying to save things.

And, yes, it’s something that messed with my head, kept me up crying many nights and was a horrible thing to go through.

But I did get through it. I just didn’t feel like sharing that part of my life in real-time. Now I’m in a place where being divorced feels like a relief and permission to start a new chapter of my life.

I have no idea what’s going to happen in the next chapter. I have very few concrete personal goals, though I have been making forward progress as I figure out what I want out of life.

How I Got Divorced for $800 with Children

Before I get into the numbers, I want to disclose a couple of things. The first is that my ex agreed to every last thing I wanted. And I only wanted things for the children.

We’re not squabbling over financials. We didn’t own any joint property and neither of us owns any real estate.

Those things in and of themselves made this process dramatically cheaper than it could have been.

If we had simply been filing a no-contest divorce, I may have taken a stab at filing the paperwork myself.

But we weren’t. There were kids involved. And it was really important to me that the paperwork surrounding that issue was rock solid legally.

So I hired a lawyer.

I began shopping by calling around to different lawyers in the county. None would give me an initial consultation for free, and many of them wanted retainers around $3,000 at the conclusion of that initial meeting.

That was not going to fly with me. I’m not a fan of paying professionals before they’ve worked to establish a professional relationship with me. Sit down with me. See if you can help me. And if you can, THEN I’ll pay you money.

I kept looking and found this lawyer who runs their business completely via USPS. You mail in the divorce paperwork and any additional information for an agreement along with payment, and they file the divorce for you.

In Pennsylvania, you can file for divorce in any county. Which can save you big bucks. So even though this lawyer was local, the filing fees were not. They were lower than what you’d pay in Allegheny County.

You have to mail back and forth a few times, but because we had not been living under the same roof for more than a year (there is no such thing as legal separation in Pennsylvania), the entire process took one month and four days.

I was holding my breath the entire time with Mx. Lawyer-I-found-on-the-internet. I really hoped I wasn’t getting scammed. I had done my research on them, but still. I was consciously taking on risk to save thousands of dollars.

Luckily for me, the lawyer was legit. I’m officially divorced. If anyone in PA is interested in using the same lawyer, get in touch and I’ll be happy to send over the information. Just keep in mind that you and your spouse must agree 100% on everything as they only file no-contest divorces.

Altogether, the costs came out to about $800, including a legal agreement about all things children.

The Costs of Staying Together

But of course, that wasn’t the only cost we incurred. Ironically enough, most of my expenses came not from the divorce, but from trying to save things.

I really don’t want to get into all the details. But I do want to say that if you, too, are trying to save a marriage or any type of relationship, set rational money boundaries at the very beginning of your attempt at heroism.

Those are examples. I definitely lived through some of those, but others I’ve watched friends and family go through before. Some of them assume a large amount of privilege and autonomy on the part of each spouse–especially when the spouse is female.

I found these costs to be the most expensive part of the divorce, though it is important to remember I lucked out with the no-contest divorce and crazy affordable lawyer.

Both of us did emotional labor through this entire process. I think each one of us would argue that the other hasn’t done a successful job in their pursuit.

That’s been the hardest part of this whole process. I have faith in myself that I can fix my money. But getting through this entire thing emotionally has been a nightmare.

It would have been hard if nothing else bad was happening in our lives. But, of course, there were other bad things.

It would have been hard if I had a mindless desk job where all I had to do was show up for 8 hours everyday and close the Facebook tab when the boss made their rounds. But, of course, I don’t.

It would have been hard if we didn’t have children together. But we do and for that I am eternally grateful, despite the deepened wounds that come with the fact at this particular juncture in time.

Yes, trying to stay together cost me money.

No, I didn’t have to pay very much in legal fees.

But at the end of the day, I am reminded once again that in life, money is hardly the thing that matters most.