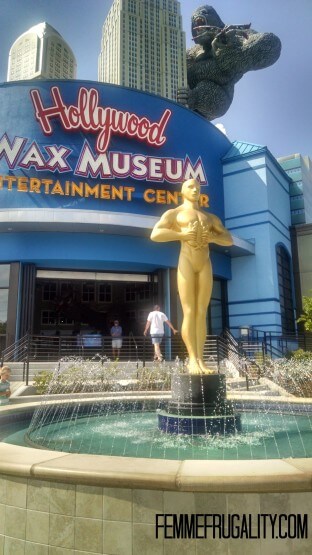 Some of you may remember from last week that we went on a pretty frugalicious family vacation this summer.  One of our strategies to keep costs low was to do as many cool things for free as we could.  One of those cool things was going to the Hollywood Wax Museum Entertainment Center.  I was provided free tickets in exchange for an honest review.

The entertainment center has 3 different attractions under one roof.  The first is the wax museum, the second is Outbreak (essentially a Zombie-themed haunted house,) and the last is Hannah’s Maze of Mirrors. 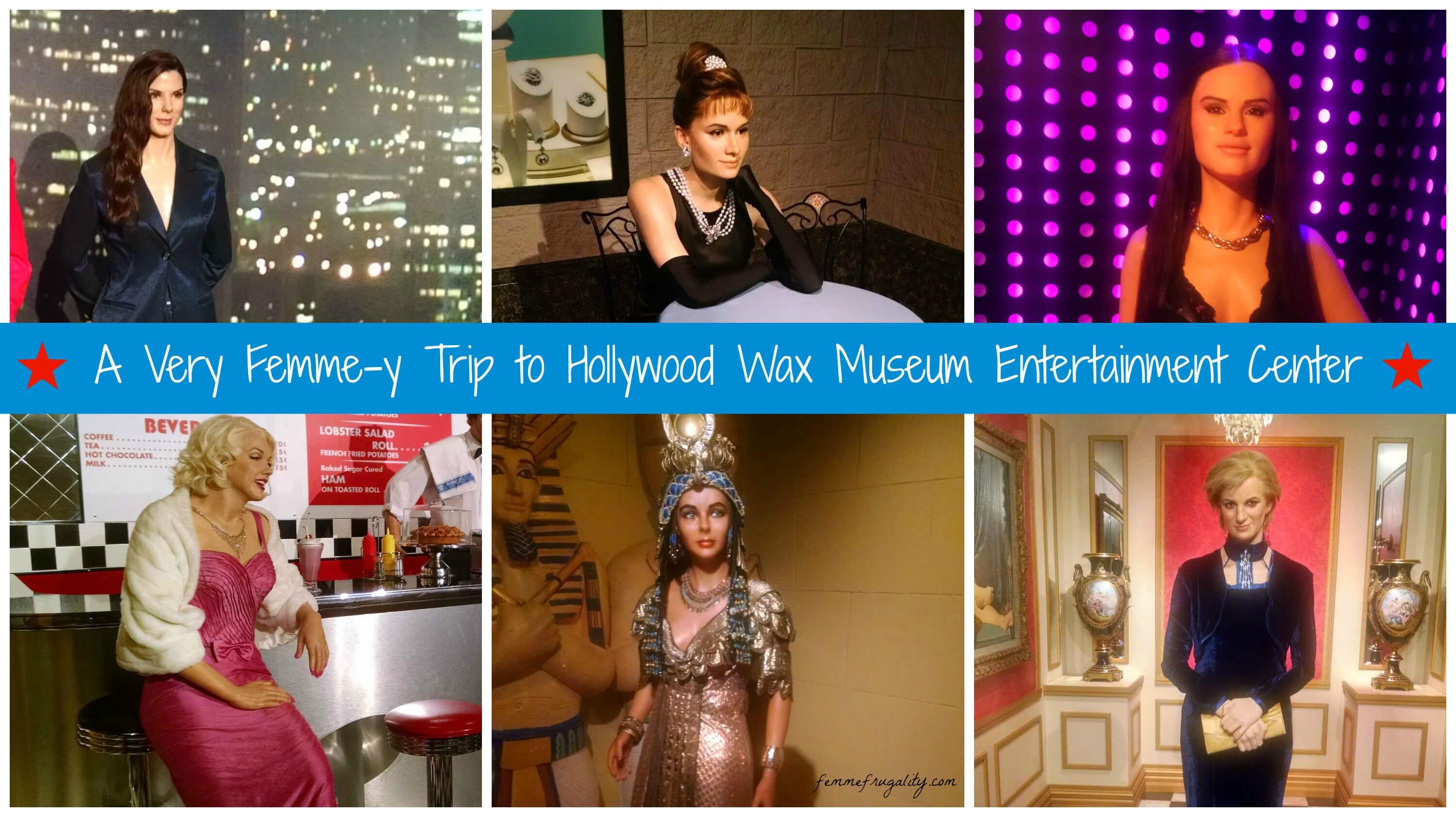 Going to a wax museum was never high up on my bucket list, but I was so happily surprised by how much fun it was.  They had actors and actresses from all ages of the big screen, along with musicians.  We got a few pictures with some of them to text out to friends, pretending we were actually with the celebs.  Don’t think our trickery actually worked, but we had fun on the other side of the phone. 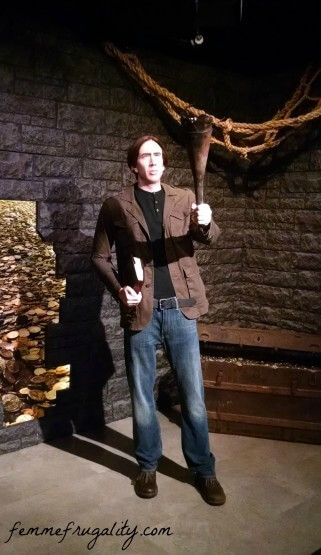 Fun Fact: The first thing the husband and I ever agreed on was that the only thing Nicolas Cage was good in was Raising Arizona.

I was also surprised by how many interactive parts of the museum there were.  The kids had the most fun in the country music part, where they played a giant piano, got to experiment with a real guitar and tambourine, and see the singer of their favorite song lately:  Taylor Swift.

Seriously, every person that came out of the Zombie exhibit came out sprinting and screaming like a little girl.  The husband, who has been watching horror flicks since he was six, strolled out calmly with his hands in his pockets.  “That was pretty cool,” he said.  “A lot more intense than I expected.”

I wasn’t taking my babies in there, but he had a great time, so I’m going to let him write this part of the review:

It’s true.  I mustered enough courage to walk through a zombie-infested research facility. At Outbreak you can see firsthand the horrors zombies can inflict. Upon entering, a short video gave me the background info on the situation. A governmental agency, attempting to create super soldiers, accidentally created violent zombies instead. Chaos and carnage ensued as I carefully made my way through the research facility. Lab technicians and security officers were no match for the rampaging zombies, as evidenced by the grisly scenes I encountered at every turn.

Outbreak gives its audience a realistic representation of zombie mayhem. The incredibly detailed scenes are made even more believable by quality sound effects, animatronics, and some pressurized water cannons that mimic the spray of blood. Coming around a corner and being surprised by a zombie is bad enough, but add in getting hit by a blood spray and you are getting a quality experience.

These zombies gruesomely devour everybody in their path, and Outbreak impressively pulls no punches. I have been through many haunted houses but this is definitely the most extreme of them all. If you can convince yourself that it’s all fake you’ll keep your pants dry, however I wouldn’t recommend Outbreak for young children or anybody with a faint heart. I pride myself on being a zombie aficionado so I kept myself composed, but the screams of my fellow patrons were genuine and real. So if you’re visiting Myrtle Beach and want to test your courage, give Outbreak a try. Just keep reminding yourself that zombies aren’t real.

This was by far my favorite part.  This is a mirror maze on steroids, with so many fun parts.  You go in, and the king and queen tell you how an evil witch has stolen their daughter.  It’s your job to find her.  The first thing you walk through is a spinning tunnel, dotted by stars.  Before you step on, it’s pretty evident that the tunnel is spinning, but by the time you’re halfway across your brain thinks it’s the walkway spinning, and you start losing your balance. 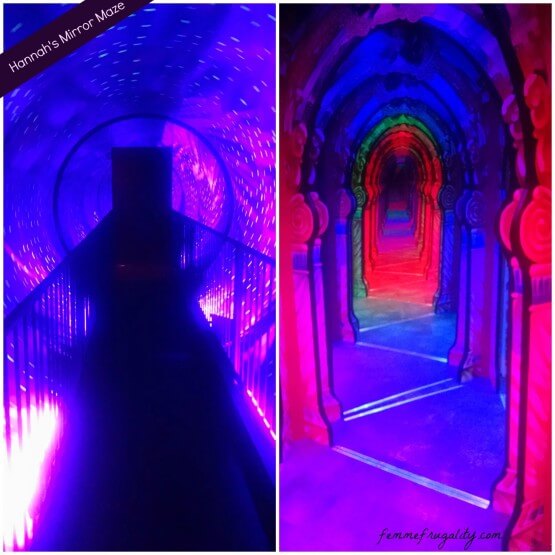 The spinning tunnel, and the maze itself. It looks like a straight hallway, but it’s noooot!

Into the maze you go!  It’s incredibly disorienting.  I kept thinking my oldest was going to smack their face off a mirror as they kept taking turns at such confident speeds, but it turns out they had a knack for this.  They could somehow tell if the next turn was a mirror or the next turn in the maze.  I could not.  They found our way out.  It still took some time, but I was pretty impressed by their talent.

At the end of the maze you walk through this crazy space room where it actually looks like you’re walking through the cosmos, and then you head into a room full of projected stars where the Princess thanks you for your efforts. 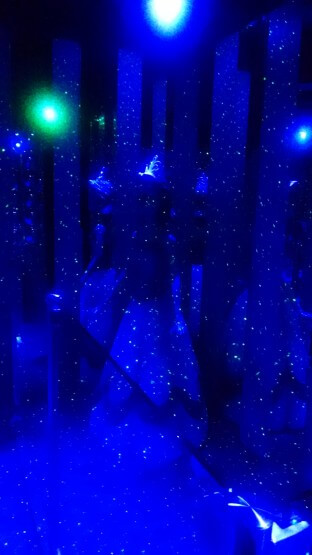 Would we do it again?

In a heartbeat.  We had a perfect week at Myrtle Beach, and this was a big part of it.  We had fun, the kids had fun…there’s nothing more you could ask for.  If you want to go, you can get $2 off admission here.