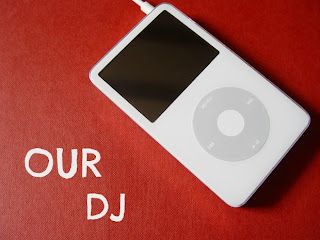 Our iPod playlist might be one of the only things for our wedding we DIY.  (I’m not all about the stress on the big day.)  But hiring a DJ to play music seems silly when our venue can just plug an iPod into their speakers.  And this way we get to choose our own playlist.
What about guest requests?  I’m thinking we’ve got some basic ones covered.  I’m also thinking of including a line on the RSVPs for a favorite song they’d like to hear that night.  I’m also asking you if there’s any classics or not-so-classics that we missed.
Here’s our totally preliminary list, including some of our kids favorites, and some weird songs we just love, for the reception in no particular order:
Also, I don’t know what our first dance should be.  We have our favorite couple bands.  But Fleetwood Mac is mostly sad, unrequitted love songs.  And Flight of the Conchords is just too inappropriate.
Thank you for leaving your suggestions in the comments!

20 thoughts on “Help us plan our wedding: iPod Playlist”