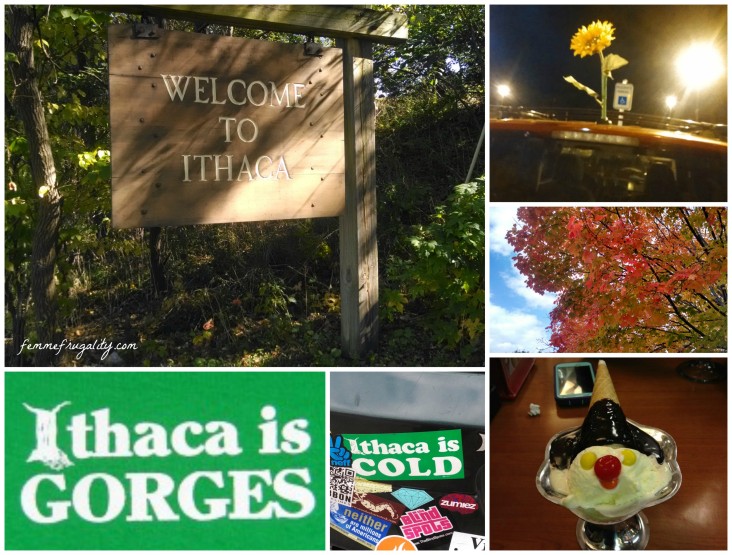 Something about going to upstate New York feels like going home.  Perhaps it’s because it’s where my fore bearers settled when they immigrated to this country.  Perhaps it’s because for a short time I lived in a part of it as a child.  But I can always tell when we cross the state line, regardless of if I’ve actually seen the “Welcome to New York” sign.

This trip to upstate was a sibling trip to the town of Ithaca.  It’s a peace, love, and scholarly type of place on Cayuga Lake in the Finger Lake region.  And I absolutely love it.  We didn’t do everything frugally, but I thought I’d pass along the budget-friendly experiences I have had in a somewhat surprisingly marked-up small town. 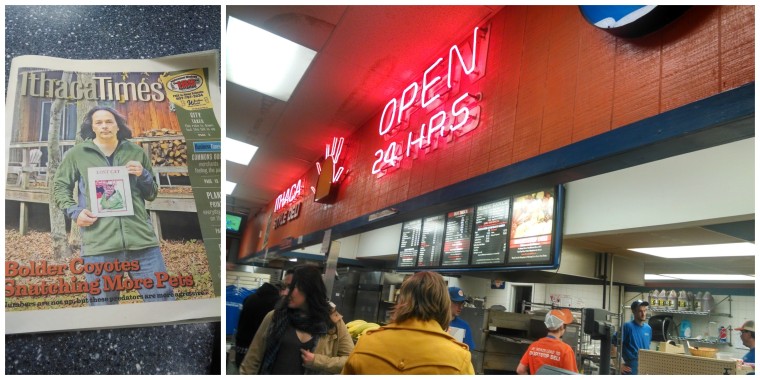 We arrived at night, so we immediately hit up The Commons.  It’s a walkable downtown district that has nightlife at night and local shopping during the day.  It reminds me a lot of the South Side in Pittsburgh.  Except a lot more safe.

If you’re going in on a budget, get your party started well before 10 PM.  We started our walk at around quarter to, and missed a lot of cool stuff by minutes.  Like every single happy hour.  And food.  So many of the places that served food closed at ten.  But it ended up being a happy thing, because it led us to the Short Stop Deli, open 24 hours.  Where we tried a Sui.  Which was pretty much everything you could ever want on a pizza inside a sub.  And it was great.  There’s no chairs; it’s all on the go.  But that worked as we still had some walking to do to get to those post-happy hour bars. 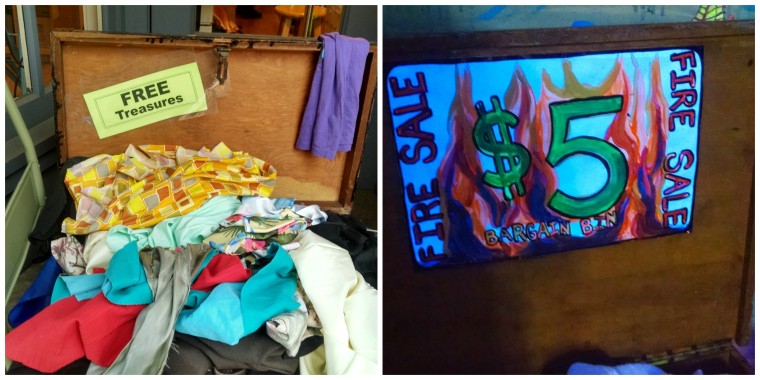 During the day the commons is all about shopping, mostly boutique style.  There’s a bunch of head shops which I’m sure would be all up in arms if you called them head shops, thrift stores, up-scale clothing boutiques, college clothing boutiques, art boutiques, etc.  A lot of it was overpriced, and then some of it was just justifiably expensive.  But the cool thing about having so many hippies around is that there are freebies everywhere.  Like the free treasures (aka fabric scraps) pictured above.  And then there was a $5 bargain bin with a bunch of, I’ll be honest, pretty used clothes.  But there were so many little things like this that it wasn’t hard at all to find a steal. 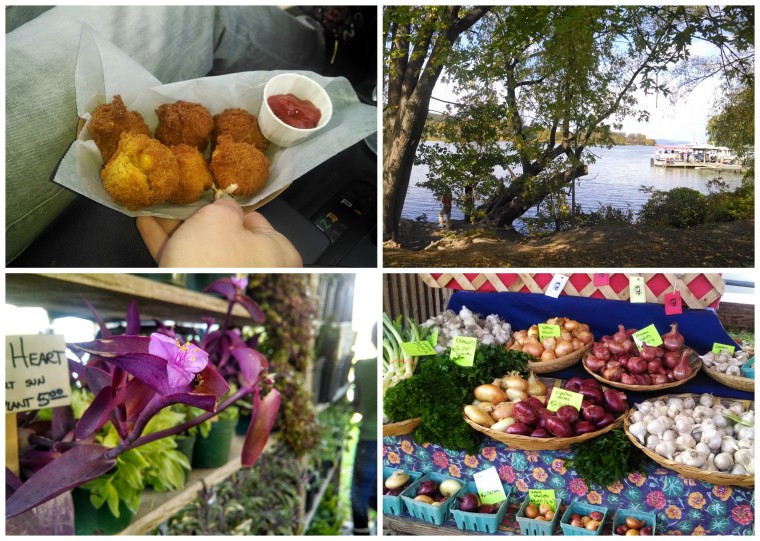 The farmers’ market was enough to make me want to move to Ithaca.  It was absolutely huge, with stall after stall of vendors.  They had everything you could possibly need there.  There was a ton of organic food, but not just produce.  Meat.  Spices.  Cheese.  I’m sure there was bread and I missed it.  I noticed a lot of the stalls actually accepted EBT, which I thought was pretty amazing.  There were also flowers.  And a $12 massage I may have indulged in.  And fancy wines and spiked ciders.  And clothes and sweets.  And ready-to-eat food from all corners of the Orient.  And it’s on the water.  On the way out the sibling picked up all those hush puppies for $1.  I want to do all my grocery shopping there every weekend.  But, alas, it’s 6 hours away. 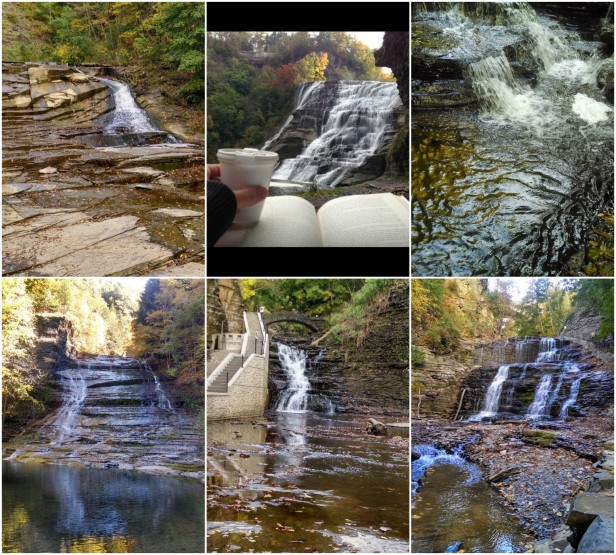 Because it’s beautiful and has so many gorges.  This visit the water seemed a bit low, but the ice-age gorges both can’t and shouldn’t be missed.  They’re everywhere.  We saw Ithaca Falls, Buttermilk Falls, and Cascadilla Falls all in our short trip.  They’re also free.  Most of them have stairways alongside so you can go for a pretty intense hike.  Some of them have trails instead.  So, so pretty.  So worth not missing. 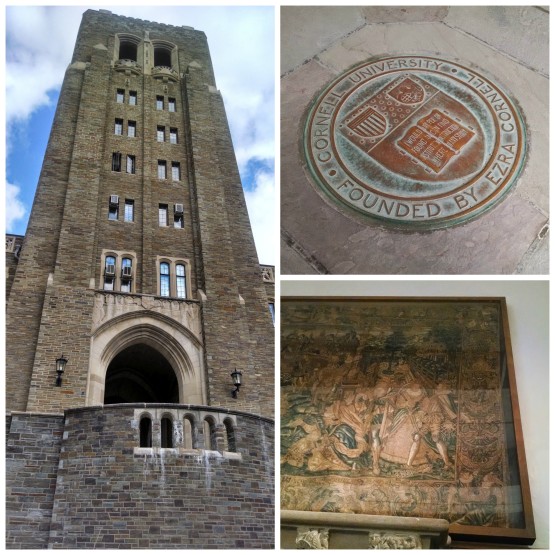 We were there over a weekend, and had no problem walking around. There’s apple orchards.  There’s the clock tower.  But the Law School is straight up Hogwarts.  Especially the impressive library.  They had it closed the weekend we were there, but it’s normally open and jaw dropping.  You just have to be quieter than you’ve ever been in  your entire life once you’re inside.  The rest of the facility is great, too.  I swear I was waiting for the larger than life oil portraits to start conversing with me.  And what other campus has a medieval tapestry above a gothic fireplace in the lobby where students can just hang out?

We told some locals at the bar the first night we were going to Stewart Park.

Because you have no idea how lucky you are.

Stewart Park is a long, grassy park right on the southern tip of Cayuga Lake.  Weeping willows line the panoramic views of the lake.  Children play on the sprawling playgrounds.  Seagulls, ducks, and other waterfowl flit around on the surface of the calm waters. Yet it’s big enough that if you pack a picnic or want to just sit and meditate, you’ll be able to find some relative privacy.

The Best Eats Just Happen to be Affordable

Glenwood Pines is a small restaurant overlooking the lake.  (That picture is the view from our car in the parking lot.)  The burgers don’t look conventional, but they compete for the best I’ve ever had.  Part of their mission statement is serving their amazing food at a reasonable price, and they certainly live up to their goal.  If my memory serves me right, I paid between $6-$8 for one of the best burgers ever and a side of fries.  At night this place turns more into a bar-type atmosphere (especially if you’re there during a college reunion weekend like we were,) but during the day it’s extremely family friendly, too.  Just a note, that bowling game has been there since they opened 35 years ago.  And they have old-school Pac Man, too.  And gorgeous vistas while you dine.  Love, love, love.

What Not to Do

I honestly can’t recommend our hotel.  It was awful.  Dirty, unsafe, plus the prices were super inflated because we accidentally went on one of the college’s Homecoming weekends.  Which is the only reason we stayed there:  there was no where else to stay.

Talking to people around town, we found out that everything gets a good bit more affordable after the whole Homecoming fiasco is over.   But it’s definitely something to keep in mind before planning  a trip to Ithaca: it’s a college town, so be aware of college activities like move-in days, graduation, and, of course, homecoming before planning a trip if you want to avoid crowds, inflated prices, and god-awful hotels.

13 thoughts on “A Frugal Odyssey: Ithaca on a Budget”