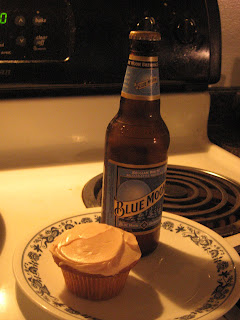 This culinary creation came into being to avoid food waste.  We had one extra beer and a cake mix in the cupboard.  So why not?
Blue Moon Cupcakes
The original recipe was a bit different, and the frosting was more of a frothy one that was made using egg whites.  It may taste better, but I was not comfortable using raw egg whites. *Linked up at Pinning!*