A lot of times when we write about money, we pretend that our income will look like this: 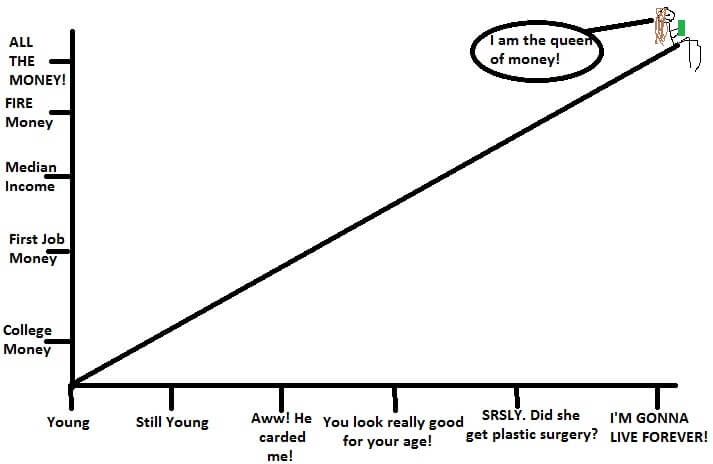 But just as the aging process doesn’t always go the way we want it to, studies show that for most American families, income doesn’t go up in a straight line at a 40 degree angle. For many of us, our income journeys will look more like this: 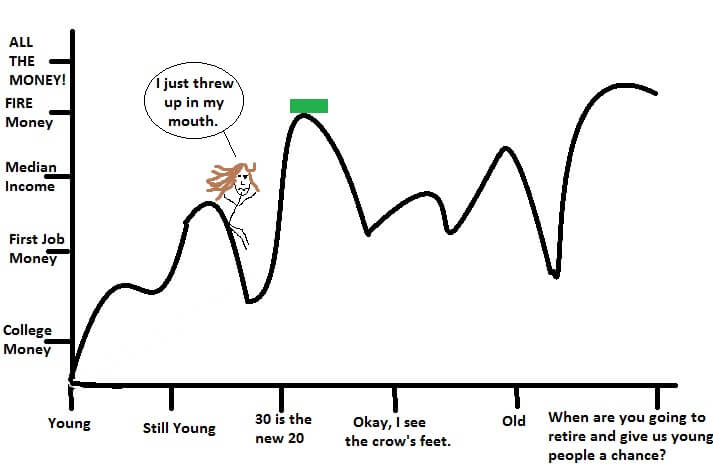 But there are some things you can do to straighten your line out a little bit. You might not have a steady, increasing source of income, but there are financial habits you can build that will help you not throw up in your mouth as you ride the ups and downs of a lifetime of income fluctuation.

I’ve been through some pretty crazy ups and downs in my financial life. I’ve been unemployed. I’ve lived in poverty. I’ve had great jobs that I loved, and even a great job that paid well.

But nothing is static. It’s true in life, and it’s true for your money.

To build resilience during those times of trial, you need to sock money away while things are good. Avoid lifestyle creep, and instead invest in your emergency fund and retirement accounts.

I know this is a good idea because I once had to live for five months without work after an involuntary cross-country move. Fortunately, I had built up a five-figure emergency fund by living frugally while I had a (comparatively but not really) fat paycheck.

Being unemployed didn’t feel good, but it felt a heck of a lot better than it could have because I knew I could pay my bills while I looked for work.

Maintain a Side Hustle

A few years ago, there was a regional shortage of work in my unionized field. Because I didn’t yet have crow’s feet, I was on the bottom of the employment register, and lost nearly all my income as the primary breadwinner for my family.

Luckily, I had this side hustle going on called blogging. I used all that extra time I had gained from not working my 9-5 to build up my business to the point where it could sustain my family, and even exceeded the max income I could have earned in the career I classically trained for.

I was blogging for a few years before I was at a point where all this was possible. Because I was able to work in my off hours to build up a side source of income, I was able to avoid financial stress and jump as cleanly as possible into a new form of employment.

Keep a side hustle going, even if your income flow is making you happy right now. You never know when you’re going to need it. 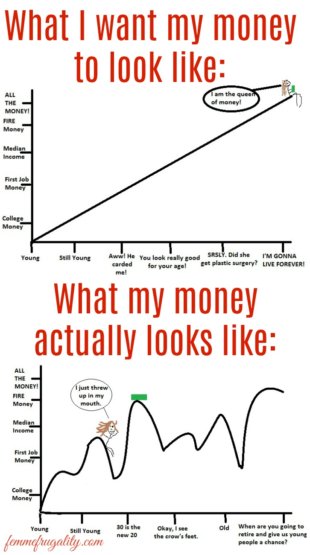 When I had my oldest child, things were not going well financially. Neither my husband nor I had a degree, and our income was extremely stunted.

When I found out I was expecting, I checked my pride real quick. I realized that I was responsible for another life, and that I couldn’t do this on my own. I needed consistent health insurance. I needed food. I needed help.

So I got it. Applying for benefits was one of the most humbling things I’ve ever done, and in retrospect, I can’t believe it took me so long to do it. Those programs helped me get on my feet and facilitated our upward mobility so much faster. Because of that help, I now pull in a decent income, paying it back both through those taxes everyone complains about and charitable giving.

But I couldn’t have gotten to “good” without asking for help to get out of the “bad.”

Get humble. Get what you need to make things better. Don’t sit in squalor because of imposed cultural shame.

[Tweet “Get humble. Don’t sit in squalor because of imposed cultural shame. #FinHealthMatters”]

Remember: It will get better.

You know how earlier we said that nothing was static?

It seemed like a bummer because I was telling you the good times don’t last.

Well, guess what? It works the other way, too.

When things are bad, they don’t stay bad forever. Things will eventually get better, especially if you’re working hard towards your goals. It might take a while, but you can fend off (situational) depression by knowing that no matter how low things seem right now, there’s a high point around the corner. Start taking action today to reach it.

5 thoughts on “What Financial Health Means to Me #FinHealthMatters”