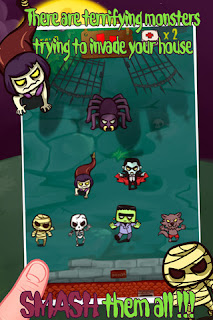 I’m kidding, of course.  All you do is use your finger to smash the monsters and not the priest.  So no crazy skills involved.  But it is incredibly addicting.
I’m incredibly bad at video games.  Even though I’m sure there’s those out there that think my monster high score is low, the only other game I excelled at was Mario Kart for Wii.  I played on-line with Japanese kids and learned all their shortcuts.  (Seriously the best way ever to learn.)  And actually physically turning into a turn?  Heck, that’s what I did with N64.
What are your favorite free Halloween apps?