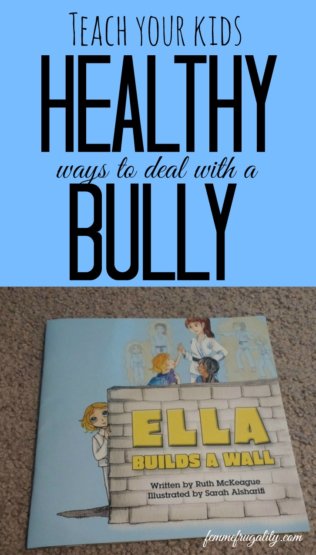 Today I want to stop and take a second to address something that’s not directly finance related: bullying.

When I was growing up, bullying made you tough, supposedly, though it hardly ever happened to the “tough” kids. With boys it sometimes but not always got physical, while girls for the most part stuck to tearing each other’s souls apart with words.

As time went on, anti-bullying campaigns became a thing. People started advocating for children who went through emotional abuse in schools, in particular. While society definitely didn’t reach perfection, things appeared to be moving in the right direction.

Without delving into the specifics of why, things have shifted culturally and quickly. Bullying is largely touted as a sign of strength. Violence and hate crimes have been on the rise in the US as of late.

This is the world I’m raising my kids in, and it makes me ill. While I hope we can make a speedy U-turn back to progress, and I know I can raise my own children to be kind, charitable and empathetic, I can’t protect them from the entire world. Bullying is something I have to prepare them for.

One way I’m choosing to instill good values and resilience in my kids is by making sure there are good morals and role models in the literature they consume.

When teacher and fellow personal finance blogger Ruth McKeague released her book Ella Builds a Wall, I knew it would be one of those books. The important kind. The kind you read again and again, and discuss later in context of real life situations.

Her work did not disappoint. In it, a girl named Ella is getting bullied at school. Frustrated, she joins a karate class, where she thinks she’s going to learn how to kick some butt.

She also learns to not build walls of outward hatred or self-loathing around herself, separating herself from the rest of the playground kids.

Ella’s walls are metaphorical, but insanely important to understand. When she finds herself jealous of a peer, she recognizes and subdues the emotion, leading to a beautiful friendship.

When her bully gets violent with her again, she defends herself until a teacher arrives to witness what is actually happening.

And when the bully, in his punishment, starts building walls of anger around himself, wallowing in his misery, she extends kindness to try to pull them down.

My kids enjoyed learning the karate blocks in the book, but I was impressed with how much they understood the emotional lessons, too. When I asked them about the walls Ella tore down, they told me about the jealousy and anger. They told me about the bully, and the kindness Ella extended to him.

Overall, regardless of which era you’re living in, the takeaways were valuable lessons that many adults still haven’t mastered:

If you want a quick tie-in to money, when you have these skills, you’re more likely to have a larger network of friendly faces in your career. You’re also more likely to negotiate for higher pay when you believe in yourself and feel like self-advocacy is a strength rather than something to be ashamed of.

But mostly, you’ll just be a better person.

Bring Home a Copy of Ella Builds a Wall

If you want to take on this complex subject with your kids, this book makes it simple. I’d highly recommend picking up a copy.

Ruth is Canadian, so the prices are CAD rather than USD, but after you pay for shipping it comes out to around $15-ish USD, anyways.

How have you dealt with bullying?

Whether you’ve experienced it yourself or have seen your child experience it, whether it’s happened in the schoolyard or in the workplace, I’d love to hear your experiences with bullying and how you’ve handled it. Leave your thoughts in the comments below!

9 thoughts on “Ella Builds a Wall: Anti-Bullying Book for Kids”