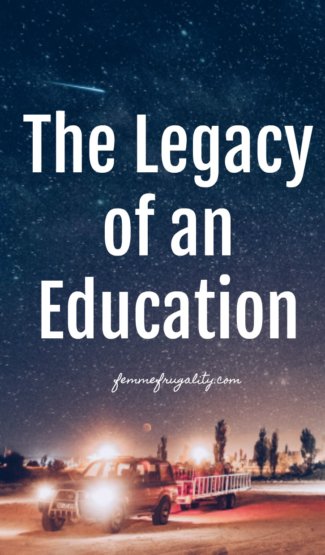 My grandfather–who was from a family of refugees–settled in his home country when he was a very young boy. The family started a successful restaurant, and everyone was expected to pitch in and follow the family tradition.

But my grandfather had other plans. His goal was to get as much education as he could so he could travel the world and settle in the US.

His father was not pleased.

His sisters would sit awake at night watching over his bed as he studied under his wool blanket by candlelight. This was in a time before electricity was a common utility, and they were afraid he was going to burn the house down.

His mother supported him wholeheartedly. She advocated for him to his father, and did everything in her power to make sure her son was able to achieve his goals.

It worked. After serving his country, attending university in Europe and being among the first to join NATO forces, he was able to move to America. He eventually landed a job in his technical field, and was extremely well-respected in the community throughout his entire life.

He was also well-respected back home. He’d go back to visit, but also to be a witness at weddings and serve in other honorary roles. His hard work had inspired so many of his nieces and nephews to pursue an education that a large portion of them ended up with good jobs on different continents, one of them even following in his footsteps and emigrating to America.

Living Up to the Legacy

Needless to say, I grew up knowing an education was important. There was no question in anyone’s mind that I would go to college and perform well. Work ethic was important, and it was important to apply it to areas where you’d reap benefit–like education.

A series of unfortunate events led to me leaving school early, though. I can’t tell you how much I felt like I had failed. But eventually, as a nontraditional student, I finished my desired degree without debt.

Over the past couple years, I’ve realized that my interest in money has shifted from the “how” to the “why.” I’ve realized that my passion lies more in understanding the relationship between people and systems vs dollars and cents. Monetary wealth is good, but not if we lose our soul or empathy to it.

I want to explore more of these nuanced relationships. And I want to do it through getting another degree. So in late August, off to school I go.

I started by looking for schools that had programs that matched what I wanted to do. I toured them, talked to faculty, and got a feel for how my studies would be handled as a nontraditional student.

I eventually decided to choose from among the state schools as tuition was much, much more affordable. And the programs weren’t necessarily lacking in any respect when compared to the more expensive private institutions.

Scholarships and grants will be funding the whole thing. I’m hoping I’ll even be able to pull in a little extra money like I did last time I attended school, but we’ll see.

Either way, I’m excited to be going back. I’m excited to pursue more education even though I’m so very far from being a traditional student. Even as I continue to work full time. Even though things didn’t work out the way we all thought they would, I know my grandfather would be proud.

Thanks for the EE bonds, Grandpa. Some of them have finally reached full maturity, and knowing that you were saving for my education pushed me to be my best academic self then, and continues to do so now.

5 thoughts on “The Legacy of an Education”