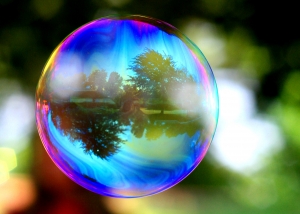 I read an interesting article on Bardiac that encouraged readers to take a quiz to see if their finances (and thus lifestyle) kept them in a bubble…away from mainstream American culture.  The lower higher your score was, the more in touch with the “real world” you were.

There’s tons of controversy surrounding the quiz.  People get angry when they see their scores.  Bardiac assumed it was because no one wants to be told they live in a bubble.  You don’t want to be told that you can’t empathize and that the way you vote is sometimes detrimental to the actual needs of your fellow Americans.  I’d argue that living in a bubble is great.  Yeah, there’s some things you’d like to maintain.  Like keeping in touch with reality.  And compassion for your fellow man on something more than a superficial level.  But aren’t there good things to be said about being sheltered?  One of the questions asked you if you ever had a job that caused you physical pain.  (It had to be something more than a summer or high school job.)  That’s something I’d like to avoid….for myself and my children.  The other is academic achievement.  What is so wrong with doing well?  Nothing.  And what’s so wrong about being brought up with parents who do well?  Nothing.  As long as they teach you compassion, and that the size of a paycheck a man brings home does not define his character.

My Problems with the Quiz

My score was 58.  Whatever that does or doesn’t mean.  What’s yours?
Take the Quiz